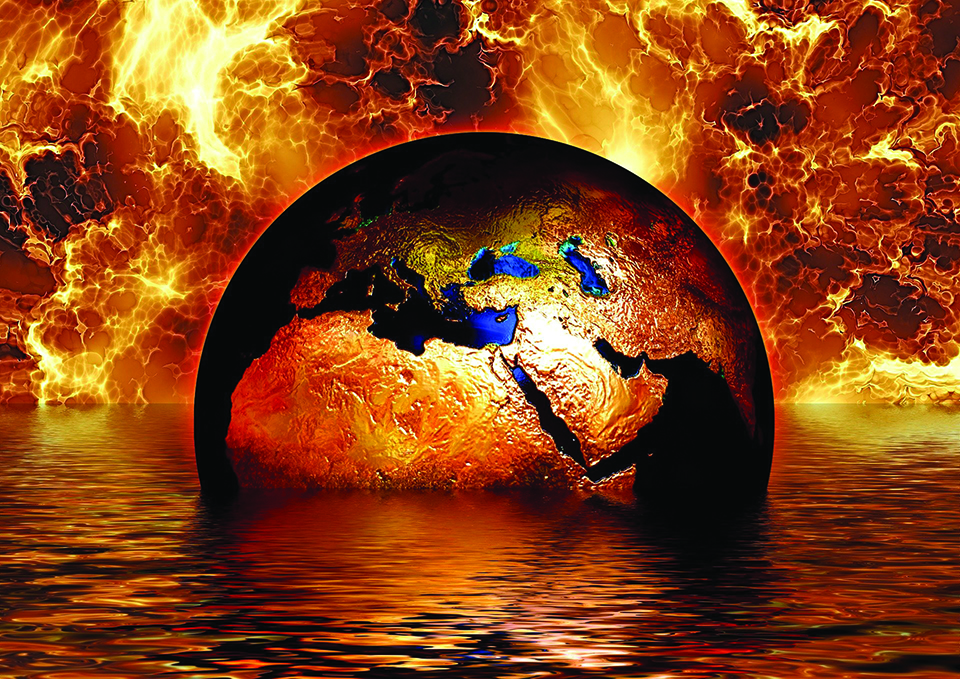 Paudel is Assistant Planning Officer at Department of Forests and Soil Conservation, Pandey is Under-Secretary at Ministry of Forests and Environment
news@myrepublica.com

That we have to face the adverse impacts of climate change is certain. Question for Nepal is whether we are also prepared to cope with the impacts

Fifth Assessment Report of Intergovernmental Panel on Climate Change (IPCC) states that the annual average increase of global temperature is 0.85oC over the period of 32 years from 1980 to 2012. This unprecedented change in the earth’s temperature has adverse impact on life and earth’s system. Recognizing the severity of climate change impacts on people’s livelihood, climate change has been included as one of the goals of Sustainable Development Goals (SDGs) agenda adopted by the United Nations General Assembly in 2015 and agreed by almost all parties. Goal 13 of SDG aims to “take urgent action to combat climate change and its impacts.” The targets are: i) strengthening resilience and  adaptive capacity to climate-related hazards,  ii) integrating climate change measures into national policies, strategies and planning and iii) improving education, awareness-raising and human and institutional capacity on climate change mitigation, adaptation, impact reduction and early warning.

We hear people say in some forum that Nepal has little to do with SDG 13. But goal 13 is very much crucial component for Nepal as well. The impact of climate change is remarkably higher in developing and small countries than in developed countries. Nepal is also highly vulnerable to climate change as Maplecroft—a global risk and strategic consulting firm based in UK—in 2012 ranked it as the fourth most vulnerable countries in the world to climate change hazards. Communities and ecosystems of Nepal are highly vulnerable to climate change and we need to develop their adaptive capacity to deal with climate-related hazards and other natural disasters. The third target of SDG 13 is improving education, awareness-raising and human and institutional capacity on climate change mitigation, adaptation, impact reduction and early warning, among others. In fact, awareness raising from school level is what is needed to develop the adaptive capacity of communities. Early warning systems can be very helpful in reducing the impact of climate-induced disasters. Developing and establishing early warning system in the river basin reduces the impact of flooding at the downstream as the people get the opportunity to move to the safe location.

Goal 13 of the SDG is prerequisite to achieve other goals as climate change has posed a hurdle to achieving many other goals. Working to achieve the SDG goal 13 will help to achieve other goals as well. Enhancing climate resilience and effective adaptation will raise income level of vulnerable communities which will contribute to reducing poverty (Goal 1). National Adaptation Program of Action (NAPA) of Nepal identifies agriculture and food security as one of the most important sectors affected by climate change. Different assessments have shown that climate change has been adversely affecting agriculture as the food production system has been affected due to rising temperature and drought. If we reduce the impact of climate change, food security improves (contributing to Goal 2). The impact of climate change on the human health has been evident with arrival of new diseases. Reducing the risk of climate change would obviously increase health condition (Goal 3). Water sources are continuously drying up due to drought in many parts of the country. Activities focused on water source protection during climate change adaptation process increase people’s access to clean water (Goal 6).

Women interact with natural resources more than their male counterparts in Nepali households. Women have to fetch water from distant places in many of Nepal’s villages. As water sources are drying up, women have to spend longer hours to fetch water. If we protect the water sources it would reduce great burden on women and could also contribute to equality (Goal 5). Goals relating to access to affordable and clean energy (Goal 7), sustainable infrastructure (Goal 9) and resilient communities (Goal 11) can be achieved while we work on the climate change mitigation and adaptation. Climate change has been posing threat to the survival of many species of life below the water and on earth. Enhancing climate resilience of ecosystem would be helpful in improving the condition of life below water (Goal 14) and life on earth (Goal 15).

All of these policy interventions have ‘Prosperous Nepal, Happy Nepali’ at their core. And this goal can be attainable with cumulative effort against climate change. However, these policies need to be revised and aligned with SDG goals.

National Adaptation Plan (NAP) has been recently prepared with the aim of addressing both short-term and long-term adaptation needs. This needs to be implemented.

Climate change is a serious problem for all the countries. Thus it is imperative for countries like Nepal to give more emphasis on climate change adaptation. It is certain that we will have to face adverse impacts of climate change. But whether we are prepared to cope with impacts is also in our own hands. Effective implementation of SDGs will enable us to cope with adverse impacts of climate change. Along with international commitment, for country like Nepal high-level political commitment is needed for planning and its effective implementation to achieve goal 13 of SDG.

Paudel is Assistant Planning Officer at Department of Forests and Soil Conservation, Pandey is Under-Secretary at Ministry of Forests and Environment

Nepal must be ready for Kunming and Glasgow

Former PM Oli receives tika from his parents
14 minutes ago

Motorcyclist killed after being hit by Scorpio
49 minutes ago