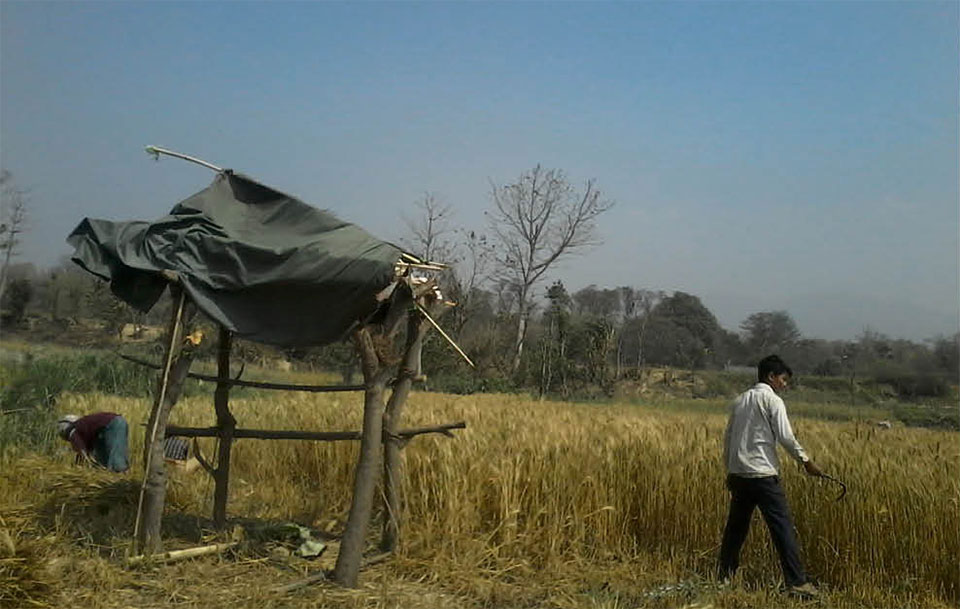 “It comes under their responsibility to manage human-wildlife conflict. Fencing properly is their duty, not ours, they allocate budget for that purpose every year,” said Karna Bahadur, a farmer of Raptisonari Rural Municipality.

NEPALGUNJ, April 6: Churna Bahadur Bhandari, a local farmer of Sauri village in Raptisonari Rural Municipality–1, could not harvest his crops this season as wild animals damaged his wheat and paddy. He hates animals for this reason.

“Nothing is left, they damaged all the crops,” he said.

The loss will have a lasting effect for him and his family. Even if he succeeds to make good harvest next season, that will not cover the loss he incurred this time.

“I had tried my best to protect my crops. Yet, I could not save them from the animals. It's very challenging for the farmers like us,” he noted.

He knew that wild animals roam around the fields. So, he used to keep vigil. Most of the times, he would patrol rather than sleep at night. Fencing would have probably kept the animals away. But that's not something he can afford to do.

Wildlife from Banke National Park bothers the farmers a lot. Whether they like it or not, wild beasts come around, storm their fields and eat the crops. Sometimes, they don't eat anything but just destroy the plants.

“This time, it was wild boars. They came and damaged all my wheat. Barely anything is left for me to collect,” he stated.

Karna Bahadur Budha of the same village this time lost mustard, wheat and beans to the wild animals. Had there been no encroachment by those animals, he would have made a good amount of money.

“Production was very good this time, it was better than last year. But it is useless as they damaged everything,” he said.

Such issues are not new for farmers like Budha and Bhandari. However, they have not been able to come up with lasting solution of the problem.

“Neither the national park cares, nor do we have anything in hand,” lamented Budha.

According to him, farmers in the buffer zones are bearing losses annually due to the animals.

“No matter what it is, they simply destroy it and leave. Farmers here are bearing huge losses, every year,” Budha said.

There is no particular time for those animals to come in the fields. They do not just come in broad daylight but even during the night time.

“There is no guarantee when would they storm in. When we keep vigil in the day, they come at night and when we are patrolling at night, they sometimes come in the broad daylight,” Budha explained.

There are instances when the farmers have encountered those animals and chased them away. In the process, there remains possibility of both the parties being injured. Sometimes, human causalities have also taken place, while even humans have killed animals a number of times.

As per the government provision, the national park should fence its border to prevent human wildlife conflict. However, as this very national park has fenced only certain areas and kept the remaining parts open, the problem is widespread, according to Budha.

“It comes under their responsibility to manage human-wildlife conflict. Fencing properly is their duty, not ours, they allocate budget for that purpose every year,” he said. “But we do not know where the budget goes,” he added.

Locals reported that the national park is biased while fencing. Those who have good connection with the park officials or have political connection get their work done easily while the grievances of other farmers' are never addressed.

Chief Conservation Officer of the national park Yuvaraj Regmi however claims that the conflict between humans and wildlife is not as fierce as before. “The problem is not that serious anymore,” he said.

He also claimed that the national park has been carrying out several programs for awareness among people for wildlife conservation.

“Such programs are being fruitful. There is not much problem as before,” he said. “In the case of loss of crops by animals, farmers get compensation,” he added.

The maximum compensation when wildlife from the national park destroys crops is Rs 10,000. According to farmers, that is too little amount to cover the losses.

For human causality due to animal, the victims' family can claim Rs 1 million. Similarly, those injured due to animal attack is given free treatment by the government.

NEPALGUNJ, Dec 31:  The Bheri zonal office of Food Management and Trading Company Ltd (FMTC) has said that it would increase... Read More...

Roads in the middle of forest threatening safety of wild animals

DHARAN, Feb 12: There is a road which runs right through the Panwari Community Forest of Dharan Sub-Metropolitan City-6, in between... Read More...