Why women should be given equal rights in citizenship 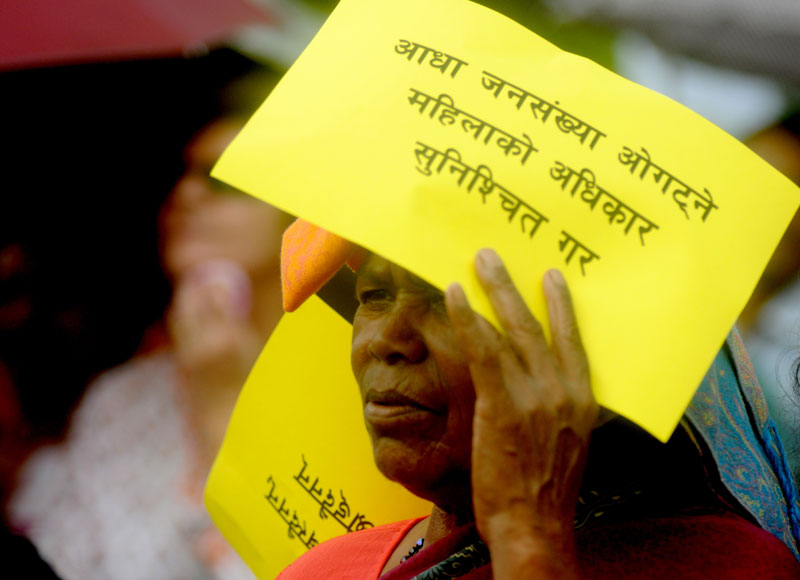 Riti Prasai, a student at Kathmandu School of Law, is a general member of Youth in Federal Discourse.
riti.prasai@gmail.com

Nepal’s sovereignty will be stronger if we empower our women and children and weaker if we disenfranchise the children of Nepali mothers. A nation that treats its citizens unequally is doomed from within.

It was a matter of pride and hope to many Nepalis when the Constitution of Nepal 2015 replaced “and” with “or” to substitute the requirement of “both father and mother are citizens of Nepal” by “either father or mother is a citizen of Nepal” for obtaining citizenship by descent. Article 11.2.b of the constitution promises citizenship by descent to the children born to parents one of who is a Nepali citizen. However, Articles 11.5 and 11.7 limit the scope of the “or” provisions incorporated under article 11.2.b, making the constitution a failure in addressing the historically suffered problem of unequal citizenship rights depriving women of equal status as men in imparting citizenship to their children.

There are two aspects of discrimination. First, a child born to a woman can obtain citizenship by descent only if the child’s father cannot be traced. The mother has to prove that the child’s father is Nepali and that the child was born in Nepal in order to obtain citizenship for her child by descent. Second, a child born to a Nepali mother and a foreign father can only be granted naturalized citizenship, if the child has permanently resided in Nepal and only after producing proof that the child has not acquired the citizenship of his father’s nation. None of these conditions apply to Nepali fathers who wish to transfer citizenship to their children. While technically a child born to a Nepali mother can obtain citizenship in her name, the law has several conditions that make it impossible. The buts and ifs attached to a woman’s right to pass on citizenship to her children make a mother dependent on the consent and assistance of the husband in imparting citizenship rights to her children and restrict mother’s right to confer citizenship to her children independently in the same capacity as fathers. As rightly pointed out by the Nepal Communist Party (NCP) lawmaker, Binda Pandey, “why do we pretend to grant equal citizenship rights through one clause, only to take it back by enacting many other clauses?”

In September 2018, a photograph on social media showed an activist who had pinned a slogan on her back that read in Nepali “our father isn’t lost; he is the rapist of our mother”. It was intended to highlight the plight of single Nepali mothers trying to get citizenship for their children. A mother has to declare that the father is unknown or unidentified and provide detailed information on why he is unknown or unidentified, with the entire stigma associated with it. In a highly conservative and patriarchal society like ours, revealing that the father is unknown makes women and their children more vulnerable to discrimination and stigmatisation. An incident where a 60 year old Nepali woman was denied citizenship for her grown up sons after her husband committed suicide and was mocked by the CDO, calling her Mother Mary who could give birth without a father, shows that the provisions have not only created discrimination but also humiliation to Nepali mothers.

According to the UN, the number of people combating the problem of lack of citizenship in Nepal is significantly huge. This is evident from the fact that an estimated 5.4 million individuals in Nepal, 24 percent of the population aged 16 and above do not have citizenship, as per the Country Reports on Human Rights Practices for 2018 released by the US Department of State. A particular cause, which contributes to the high number of stateless people in Nepal is discriminatory citizenship law. Besides contributing to statelessness, it also violates the basic human rights of people. Lack of citizenship violates one’s right to movement, right to education, and right to work as one cannot get a driving license, open a bank account, give examinations, pursue higher studies or carry out legal transactions without citizenship. There are 898,000 children below the age of 16 living with single mothers in Nepal according to the National Population and Housing Census of Nepal,2011, and the conditions imposed on a mother's capacity to transfer citizenship to her children do not resolve problems to these children of single mothers. Thousands of children that are the product of intermarriages between Nepali and foreigners could remain non-persons in Nepal as naturalized citizenships are only rarely distributed in Nepal. This problem of statelessness is a state made problem and can be minimized by sabotaging the discriminatory provisions.

A survey report prepared by the office of the UNHRC on gender equality, nationality laws and statelessness 2018 reveals that the equality between men and women relating to conferral of nationality upon children has not yet been attained in 25 countries. It is conventional that Nepal is also listed among those 25 countries having provisions discriminating against women with regard to conferral of nationality upon their children. It is a matter of shame to have proudly mentioned “All citizens shall be equal before law” in the constitution and be listed among 25 countries around the globe with discriminating provisions against women.

Binda Pandey, in her interview with the Kathmandu post said “when I present the achievements of our movement in international forums, everyone is surprised by how quickly Nepal has been able to accomplish so many things. But there are two issues that get constantly raised at international forums. Why are women being denied equal rights to citizenship? And why are women still being banished to goths during their period in a country which has achieved so much progress?” This testifies that Nepal’s stand on gender based equality is being questioned not only by activists inside the country but also by international societies outside. Nepal can prove its stand by removing the discriminatory provisions.

In the Sabina Damai v HMG case, the Supreme Court of Nepal issued a landmark verdict allowing children to obtain citizenship in the name of mother alone. This verdict of the Supreme Court didn’t aim to limit itself to grant citizenship to Sabina only through mother’s name, but also ruled that women should be allowed to pass citizenship to their children independently. “That verdict was not just for Sabina Damai, but for every person who wants citizenship through mother’s name” the former Supreme Court justice, Balram KC said. A handful of mothers who were determined to fight tiresome legal cases have managed to get citizenship for their children. The verdicts of such cases should be acknowledged and the unfair provisions must be removed so that mothers don’t have to take trouble seeking help from the judiciary for something that can be granted by the legislative.

Nepal has ratified majority of the international human rights treaties and the discriminatory citizenship provisions disregard its obligations under them, specifically under ICCPR (International Covenant on Civil and Political Rights), UDHR (Universal Declaration of Human Rights), CRC (Convention on the Rights of the Child) and CEDAW (The Convention on the Elimination of all Forms of Discrimination against Women). The citizenship laws are to be revised and the limitations imposed on women’s capacity to pass citizenship to her child must be removed in order to comply with the international standards as well.

The discriminatory provisions have been defended by lawmakers in the name of national security and sovereignty and in the name of preventing rape cases. It’s high time they understood that Nepal’s sovereignty will be stronger if we strengthen our women and children and weaker if we disenfranchise the children of Nepali mothers. It’s high time they realized that the gender based violence like rape will continue to increase if women are continuously regarded as the second class citizens and are discriminated by the nation itself. It’s high time they realized that a nation that treats its citizens unequally is doomed from within and does not need foreign threats to collapse.

A choice can be made to embrace and promote gender equality, to help eradicate statelessness, and to promote national sovereignty. Nepal can choose to make that choice by granting citizenship by descent to every child born to a Nepali mother, unconditionally.

KATHMANDU, March 29: After standing for almost an hour through traffic jams in a crowded public vehicle, two of the passengers... Read More...