Why we lag behind 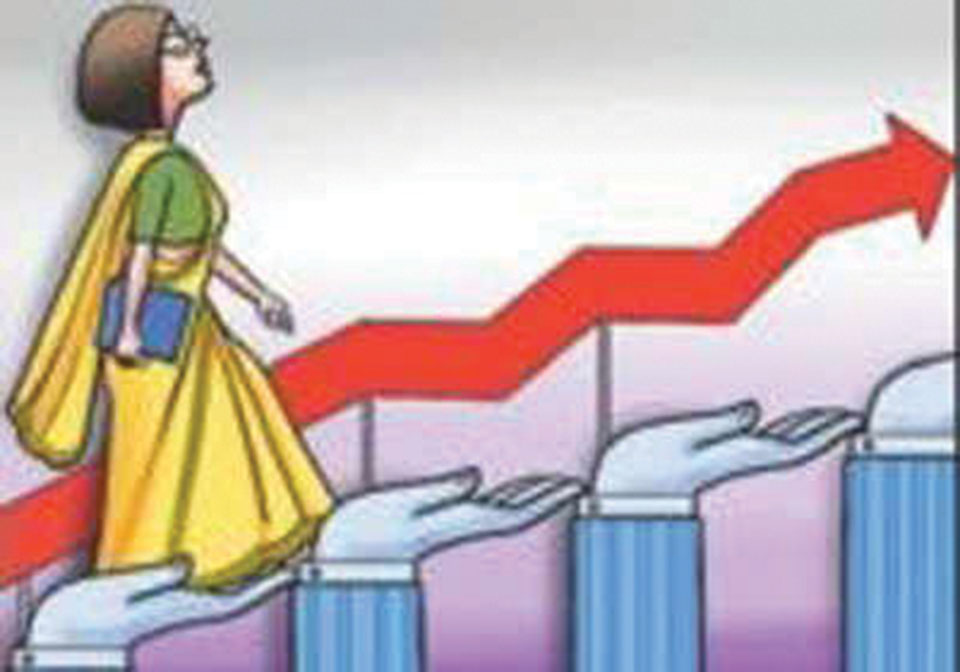 While the decision making executive positions are strictly male arena, women officers often get lost in the labyrinthine of the social and cultural gender constructs

The paradox of inclusion in Nepal’s civil service is that the policies designed for women representation are plenty but the number of women in policy making level itself is dismal. Nearly a decade has elapsed since the concentrated effort to increase women representation in Nepal’s civil service was materialized. In 2007, the second amendment of the 1992 Civil Service Act made the provision of 33 percent reservation for women to bridge the depressingly high gender gap in the civil service. In addition, the age bar for women to apply for the civil service jobs has been pushed further to 40 and after entry into the job, the probation period for women employees lasts only for six months (six months shorter than for their male counterparts). If a woman wants to file candidacy for promotion to the next level, she gets a year waived to the required number of years.

These provisions in principle have facilitated women’s speedy growth in professional life enabling them to enjoy a range of comparative benefits. However, pragmatically provisions for their promotion to the senior levels of public leadership have not been very encouraging.

It is interesting to note that there is no gender parity in top government posts even in the most developed countries. Despite a long history of the affirmative action, Canada is yet to reach the goal of gender balance in top government posts. According to the 2017 data by Women Leader Index, 46.4 percent of the senior civil officers in Canada are women—the highest in G-20 countries. In Nepal, nearly after a decade of introducing affirmative action, women account for around only 20 percent of the civil employees.

Binding constraints
Why are women not being able to make it to the top in spite of all the push?

Sheryl Sandberg, Chief Operating Officer of Facebook in her 2013 book Lean In: Women, Work and Will to Lead rightly remarks “career for women is a jungle gym not a ladder.” Women in Nepal, irrespective of their social and economic backgrounds are jugglers with multiple responsibilities at hand. Gender stereotypes on the other hand demands them to be women first undertaking the specific gender roles while the career aspirations demand them to be core professionals.  Gender weighs heavier in the scale in the society where the first generation gender biases still reign large. The fierce and often unresolved conflict between women’s personal and professional life explains why they lag in professional life.

The same gender prejudices is often reflected in the professional success of women in civil service. While the decision making executive positions are strictly male arena, women officers often get lost in the labyrinthine of the social and cultural gender constructs. For the male civil servants climbing the professional ladder is a smooth transition whereas women civil servants often have to grapple with household chores, children and the professional demands at the same time. The societal expectation coupled with the socio-cultural roles women are supposed to undertake make them more inclined to stand as the ideal women rather than an ambitious civil servant.

The foundation of professional success to a large extent is built over the personal sacrifice one can make. But for the women civil servants, when it comes to balancing the personal and professional life, they either deliberately choose or are forced to choose personal over the professional. Biological conditions like pregnancy and childbirth may push their professional advancement behind. For promotion in government jobs it is necessary to score marks as designated for work performance evaluation, seniority, academic qualifications, service in geographical areas and trainings. Women often lag behind in these.

Due to this glass ceiling that is still entrenched in the organizational structure, women civil servants fail to measure themselves up to their male colleagues on the above mentioned basis, despite all other privileges in principle.

Research has identified women’s lack of networks and sponsors as other hurdle to their smooth elevation to leadership roles. A 2013 Harvard research on women leadership entitled “Women Rising: The Unseen Barriers” has concluded that women lack access to influential colleagues which leads to the weaker networks that are almost mandatory for scoring leadership positions. This lack of networking ability in part of women may have been one reason for the minimal presence of women in government special class.

Many researchers have highlighted that the gender constructs have deeper psychological implication in women keeping them from envisioning themselves as leaders. In a patriarchal society like Nepal gender roles are deeply entrenched in the psyche of women right from the beginning of the socialization process. This could be one possible explanation of why the women often hesitate to fiercely strive to achieve career growths against all odds and their growth gets stagnated somewhere in the mid management positions.

While reservation is an effective way to increase women representation in civil service, the initiatives must be backed by concrete research to analyze and eliminate potential obstacles for women’s smooth elevation to senior level positions. Empowerment and capacity building programs are crucial to enable women to raise themselves along with changing traditional organizational nexus to make it gender-friendly.

The author is a Section Officer with Ministry of Home Affairs

Province 6, 7 and 2 lag behind in overall dev indicators, report says

KATHMANDU, March 10: Province 6, 7, and 2 lag behind in overall development indicators, while the indicators of province 3 are... Read More...