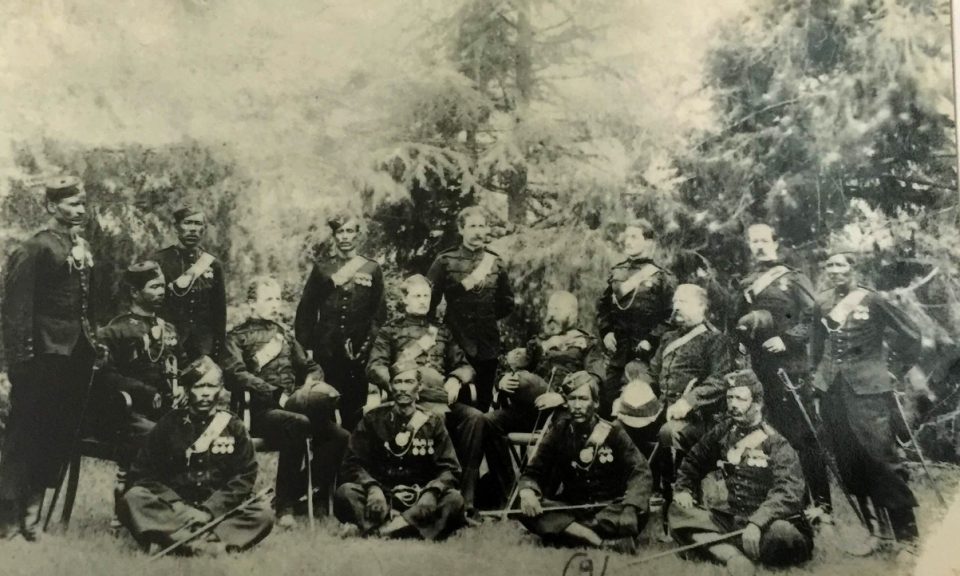 When the British East India Company, led by Robert Clive, defeated the Nawab of Bengal and his French allies in the war of Plassey in 1757, it consolidated its position in Bengal and subsequently expanded to all over India during the next 100 years.

At the same time, an ambitious king of Gorkha, a princely state only a few miles from the outskirts of Kathmandu valley, was also on the rise and busy expanding his kingdom. His name was Prithvi Narayan Shah and he later became known as the father of modern Nepal. He created Nepal by conquering all the small states in the surrounding areas, including the Kathmandu valleys.

The Indian subcontinent had only two major powers by then: The Honorable British East India Company and the Gorkhali Army of Nepal. The two powers were to eventually lock horns as they crossed each other’s paths and fought a decisive battle known as the Anglo-Gorkha War of 1814-16.

Defeat for the Gorkhali side did not only stop its ongoing expansion, but also clipped its wings once and for all. The war had crippled the losing nation and it never recovered its former glory.

However, the 1814-16 war was not the first time the two sides had clashed – they fought a brief war in 1767. The king of the Kathmandu valley and the British had already established a trade relationship and the British sent troops to aid the troubled valley king when he was attacked by the Gorkhali army.

The British, led by Captain Kinloch, suffered a humiliating defeat at the hands of the Gorkhali force, losing more than 1,000 men. They fled, leaving behind weapons and munitions. The incident became known as “The Kinloch Expedition.”

In its heyday, the borders of Nepal extended to Kangra, including Simla and Dehradoon, to the west to the River Tista, including Darjeeling and Sikkim, to the east. After their previous defeat, the British avoided confrontation.

But the Gorkhali army had its own problems. It was founded on an ill-thought out plan called the Jagir system, which meant that the army was paid through taxes raised from newly acquired lands. Since the troops were not paid from the national treasury, they needed to conquer more lands to pay their expanding ranks.

Greed also played a role in defining the course of history. When the Gorkhali army attacked the British Protectorate state of Oudh, the British had no choice but to go to war.

Initially, the war did not go well for the British. Four of six generals had to be reprimanded and eventually relieved of duty, one died and the last remaining general, David Ochterlony, was the final senior ranking man left standing.

Despite being outgunned and outnumbered, the Gorkhali army fought bravely and held on. However, they were finally defeated by deception and their own system of recruitment. The men fighting for the Gorkhali army were not all from the hills – they were men of different tribes from the newly conquered lands and their allegiances were not to the Gorkhali commanders, but to their tribal leaders.

The British knew the situation and exploited it. As a result, soldiers deserted in large numbers, forcing the Gorkhali army to accept defeat. The defeat in the Anglo-Gorkha War was the end of the Gorkhali army, and as the saying goes, the rest is history.

Nepal was nothing more than a remote, mosquito-infested and mysterious place for the British, run by a beast-like tribe, and they had no stomach for taming that beast. Still, they had some expectations for the place and hatched a brilliant plan on how to achieve them.

First, they needed an open route to Tibet via Kathmandu for trade and it was imperative to have a friendly regime in Kathmandu, which they achieved once Nepal was brought under the nations of its influence.

Secondly, the British needed someone in Kathmandu to check on the Nepali regime on a regular basis. Having a British resident at the heart of Kathmandu did that job perfectly and the regime in Nepal came under the group of British Protectorate nations without even realizing it.

By signing the Treaty of Sugauli, the British did get what they had hoped for and needed nothing more. The question of colonizing Nepal must have never occurred as it would have further complicated the situation.

Besides, colonization entails responsibility. The British had a free hand with the resources of a whole nation without having to bear any responsibilities. And the British were smart – the resources of the nation were at their disposal and they did not even have to ask for it. History can attest that the rulers of Nepal did their best to help make it even easier for the British for their personal gain, and the ulterior motives of the British side were never questioned.

Had the British colonized Nepal, it would have become a member of the Commonwealth later on and the British would have had to treat the Gurkhas on an equal basis like the forces of other member nations.

But if you can get something for free, why bother to pay for it? That was the main reason the British did not colonize Nepal.

Why will we never again fly with FlyDubai?