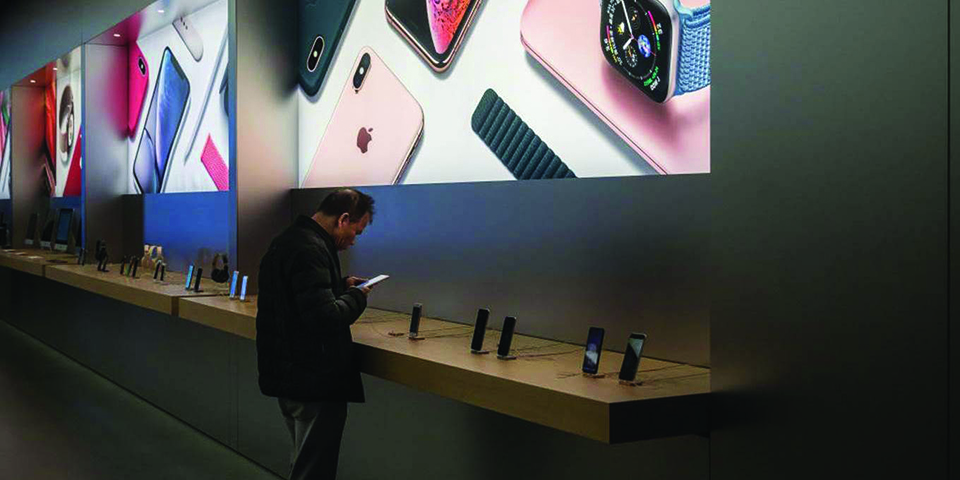 By 2020, Chinese consumers would be more relevant to the global economy than anyone except Americans

WASHINGTON, DC – For most of the past decade, the growing spending power of China’s expanding middle class has fueled the global economy. After the 2008 financial crisis, I argued that the United States and China would need to swap places—with the US saving more and consuming less, and China doing the opposite. Until the past year, that is largely what had been happening. Not so anymore.

Last week, Apple published a letter to shareholders revising down its expected revenues for the first quarter of 2019, citing an economic slowdown in China, which has become an increasingly important market for iPhone, Mac, and iPad sales. Though tech industry analysts are debating whether internal dynamics at Apple might also explain the change, the company’s new guidance nonetheless adds to the evidence that Chinese consumption is slowing.

A sustained decline in Chinese consumption would be even more worrying than the current US-China trade dispute. Given that US trade policies and other external influences should not have much effect on domestic Chinese spending, the problem may be more deeply rooted in China’s economic model.

To understand what is at stake, consider all that has changed just within the past decade. At the end of 2010, domestic consumption accounted for around 35.6 percent of Chinese GDP, according to official Chinese data. That was remarkably low compared to most other economies, not least the US, where consumption accounted for almost 70 percent of GDP. In nominal dollar terms, China’s domestic consumption thus was around $2.2 trillion, or almost five times lower than that of the US ($10.5 trillion).

Yet China’s high overall growth rate meant that Chinese consumers could potentially play a much larger role, with far-reaching benefits for global brands such as Apple, BMW, Burberry, Ford, and many others. As of 2017, Chinese consumption as a share of GDP had risen to 39.1%, representing just over $5 trillion in nominal dollar terms. That is an increase of almost $3 trillion in just seven years. And though Chinese consumer spending still lagged far behind that of the US ($13.5 trillion in 2017), the gap has narrowed.

If China were to continue on the same trajectory in terms of nominal GDP growth and domestic consumption, its consumer spending could increase by another $2 trillion by 2020, putting it at around half that of the US. Chinese consumers would be more relevant to the global economy than anyone except Americans.

Looking ahead to the 2021-2030 period, an annual growth rate of eight percent (compared to the 10 percent rate of the past decade), and a gradual increase of consumption to 50 percent of GDP, would translate into Chinese consumer spending of $18.4 trillion per year by 2030. In this scenario, Chinese consumption would surpass that of the US in dollar terms.

The question at the start of 2019, then, is what it will mean for the global economy if this scenario does not play out. If Apple’s recent guidance points to an across-the-board, indefinite reduction in Chinese consumption, will American consumers be able to serve as the sole engine of the global economy for yet another decade? If not, could any other country fill this role, even partially?

The last 40 years have taught me never to write off the US. It is possible that American consumers will keep plugging away, one way or the other. Yet consumer spending is vulnerable to a number of factors, including inflation, higher borrowing costs, and pressures on the US to increase savings. Besides, the risk of relying too much on US consumers should be well known by now. As we saw in 2008, when America sneezes, the rest of the world catches a cold.

It is very unlikely that any other country could step in to drive consumption, at least not in the next decade. The larger developed economies are all experiencing slow growth, and their consumer spending has never mattered much for the rest of the world anyway.

Emerging economies such as India, Indonesia, and Nigeria certainly could make up for declining US or Chinese consumption 20 years from now; but none is in a position to match the growth of Chinese consumption today, or even over the course of the next decade. For its part, India’s nominal GDP could exceed $3 trillion by 2020, which would make it the world’s fifth-largest economy; but it will take far longer for Indian consumers to match the spending power of their Chinese counterparts.

Can the Chinese consumer be resurrected? I am cautiously optimistic. Chinese policymakers will need to consider providing more direct fiscal support, as well as reforming the hukou (household registration) system, which currently denies rights to migrant workers from the country’s rural areas. With more economic security, this significant cohort of the country’s population will be more likely to save less and consume more. To be sure, these policies will place additional demands on the Chinese leadership. But without them, we could all find ourselves worse off.

To enable China to extend its additional support to Nepal for its fast growth, Nepal should think of teaching Mandarin... Read More...

Electoral alliance a must to safeguard democratic values: Minister Shrestha
46 minutes ago