Where have Nepalis gone? 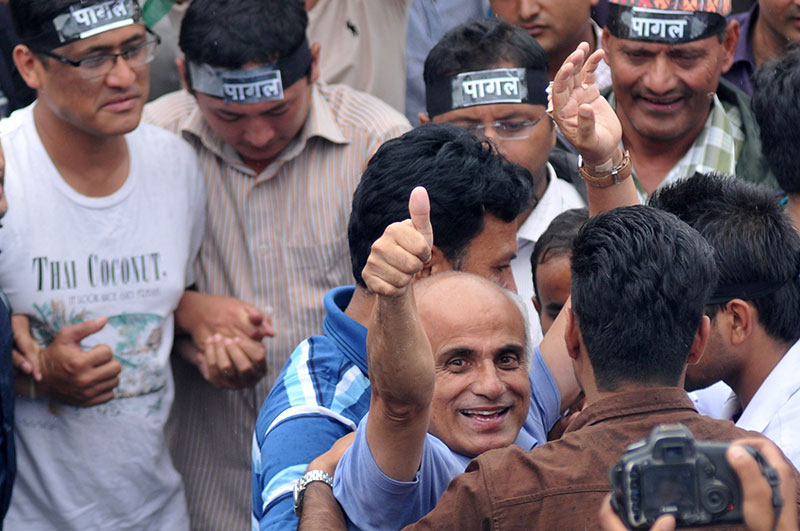 A simple meeting to evaluate the prospects of a micro solar grid in Rolpa permanently reshaped my view. Politics, I saw, had percolated down to every strand of civilian life
This story starts in Jungar, a remote and under-developed VDC of Rolpa district. Home to just over a 1,000 household, Jungar is a picture-perfect postcard when it fits within the frame of a camera.

Nestled among rolling hills dotted with small and old houses, and with a village square flanked by colourful shops and eateries, Jungar is like many other places in Nepal—ideal for a brief visit but with no seeming prospect for imminent development, and not a place you would want to live.

The drive to Jungar was long, through treacherous roads and sharp turns. About 25 local community members had already assembled when we arrived for our meeting. We were there to assess the feasibility of a micro solar gird.

Every community member belonged to some political party. Their political association defined their identity at the meeting. No one seemed to live there simply as ordinary Nepali citizens free of any political tag. It got worse as we conducted the survey. Every house was tagged as a Congress, Maoist or UML household.

A simple meeting to evaluate the prospects of a micro solar grid left me with an impression that would permanently reshape my view on Nepal: politics, I saw, had percolated down to every strand of civilian life.

On my return, I realized that Kathmandu was only a magnification of Jungar. The roads were less treacherous (though still bad), the houses bigger, electricity supply better, the commercial squares more abuzz. But politics had corrupted every strand of civilian life, perhaps more visibly and blatantly than in Jungar.

We are less a country of ordinary citizens and more of political opportunists. Where have all the citizens gone? And if there are no Nepalis left, why do we still have a Nepal?

In uncertain times with unsteady political leadership, it is always helpful to have political cover. This makes it easier to secure a job, win a contract, gain admission to a school or college, or just to get ahead. And if you don’t do it, someone else will; so, what the hell!
Today’s Nepal is no different. Political patronage is essential not just for success, it is essential for people’s very survival. Corruption and nepotism are widely accepted and deeply rooted in every area of our society, even within the most revered parts of our religions and the justice system.

The most worrisome part is that the decay has infiltrated our homes. Our moral compass has ceased to function. Lying, cheating, bribery—everything is acceptable because we have conveniently justified to ourselves that if we don’t do it, someone else will; so what the hell!

One option is to do what Dr Govinda KC did with his hunger strikes. In his tenth hunger strike, Dr KC successfully got the government to replace several key people at Tribhuvan University and the Institute of Medicine, with those that he found less corrupt and more suitable for the positions.

If Dr KC’s hunger strike gives him implicit authority to choose who gets which position, why isn’t he a politician? If he is a civilian, why does he get to dictate who gets which appointment? And if his appointments don’t produce the desired results, who will take the responsibility? Unlike the government, we can’t hold Dr KC to account.

Another option is to challenge the decision of politicians in court, as Advocate Om Prakash Aryal did against Lokman Singh Karki, the former chief of the Commission for Investigation of Abuse of Authority (CIAA). Four years into Karki’s appointment, the courts sided with Aryal’s petition and disqualified Karki, overriding a political negotiation that had installed Karki as CIAA chief.

The outcomes of Dr KC’s and Aryal’s struggles are false victories. While the results have reversed political decisions that may have had malicious intent, it further blurs the distinction between political and civilian life.

Odd as it may sound, the best way to rebuild civil society in Nepal is to step back from the temptation of politics. This involves not attempting to correct politicians—let politicians be politicians, even though many of them will continue to act on their narrow self-interest.

As civil society, we should not be making political decisions, for example, by judging who is fit for a position. Instead, our effort must go towards ensuring that those that were politically selected deliver on their promise.

Our job as civility society is to ensure that once appointed Karki does his job well. This requires greater transparency from government, which we must fight for. It requires us to be actively engaged as a shadow government of civilians. But we shouldn’t fool ourselves into believing we can correct things by simply reversing self-interested political decisions.

As civil society, we need to work harder to protect our institutional space granted in the constitution. Across all agencies and institutions, civil society is given a seat at the table—typically at the highest level, for instance, at the board-level. We shouldn’t allow political interests to fill those seats with political cronies who echo the interest of politicians that put them there. We need to do more to regain the autonomy and sanctity of civilian space without being pulled into politics.

As civil society, we need to be able to rise above their decay, be their conscience and moral compass.

There is no easy way except as citizens “we all have to be the change that we want to see”.

Any time you feel inclined to cut a little corner, remember that the filth in the political system we keep complaining about is a reflection of the decay in our civilian lives.

Scientists have identified the exoplanets where Earth-like life could exist

Aug 2: How should humans go about searching for alien life? After all, astronomers have already identified thousands of candidate... Read More...

Infographics: Where Have US Women Served As Ambassadors?

CPN-UML is further united after the General Convention: Secretary Bhattarai
13 hours ago