What is pro-monarchy protest all about? 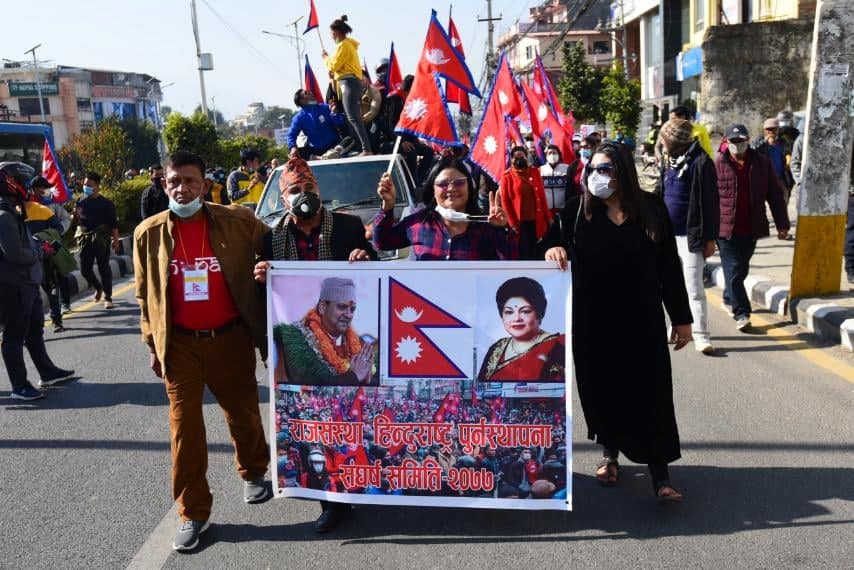 Because of the government’s inability to provide ‘freedom from’ things like exploitation, corruption and poverty, citizens are thinking about giving up on ‘freedom to’ with hopes that a monarch might at least be able to provide the former.

When the citizens of a country are able to freely protest and share their difference of opinions, we can assume that the country is democratic. But what does it say about the state of democracy if the people are exercising their right to expression, which was acquired through years of struggle and sacrifice, in support of an autocratic intervention?

In the last few weeks, we saw rallies in cities like Pokhara, Chitwan and Kathmandu that demanded the restoration of monarchy. Former Prime Minister and one of the leaders of the Maoist revolution, Dr Baburam Bhattarai, was quick to comment on the issue as he warned the younger generation to not turn their backs on the republic just because of the leadership’s inability to steer the country towards prosperity. This brings us to the question about what the public really wants and what they are willing to do should they not get it.

In 1989 Francis Fukuyama published an essay “The end of History?”  that later took the form of a book in which he essentially argued that Western liberal democracy was the “final form of human government”. This was primarily based on the idea that a liberal democracy among other political systems was able to better satisfy two main concerns of the society. The first once was its ability to address the demand for material wealth. The second one was the recognition of human worth that it theoretically acknowledged. In both cases, people’s perception is vital. Now even though Fukuyama has himself accepted that the superiority of Western liberal democracy isn’t as clear cut and the debate about political and economic systems will go beyond the ‘end’, his basis of measuring the performance of political systems nonetheless still remains quite relevant. The pursuit of material wealth is directly related to and reflected by economic progress. The more prosperous a country the better the chances of citizens acquiring material wealth.

A lot of research has gone into studying the relationship between democracy and economic growth and many have argued that the former leads to the latter. If we have a look at the richest countries in the world, we will find that the overwhelming majority of them are democracies. However, there are exceptions. There are some democratic countries that are very poor and then there are countries like China who belong to the other end of political spectrum and have an economy that many countries can only dream of. The ‘Brazilian Miracle’, for instance, was a period of unprecedented economic growth that happened under a military dictatorship. Except for the years after 2015 leading up to the pandemic, Nepal has not seen consistent and rapid economic growth rate after 2001 that could live up to the lofty and absurd promises made by the champions of the federal republic.

As a result, there is this frustration among people who are unable to tell the difference that the dawn of this constitution/political system brought. There are also factors that make it difficult to notice change. One of the most easily visible indicators and outcomes of growth is the state of infrastructure among which roadways are hard to miss. And the general consensus, at least in the capital, is that they have been bad for a long time—which to the mind of the public symbolizes the presence of an ineffective state and serves as evidence of failed development. Because there is no consistent ‘rapid’ economic growth on paper and there is no visually discernable progress in terms of infrastructure, people might be tempted to think that the continuation of the republic does not hold the potential to satisfy their pursuit of prosperity. But despite a country’s inability to perform well economically, citizens can still continue to wholeheartedly embrace a democratic system because of assurances of freedom and equality that all human beings typically strive for. This is linked with Fukuyama’s second point about recognition of human worth.

The central idea behind a democracy is that every opinion and voice matters and that the ones in power are there to serve the interests of the mass. The only problem in Nepal is that those statements don’t ring true.

There are two prominent ways through which citizens can take part in a democratic process. The first is when they vote politicians into power and the second is when they voice their concerns through demonstrations to the ones they voted in the first place. We are yet to see timely and regular election cycles so people don’t see the relevancy of the first way, which means that all they have been relying on in the past and are left with in the present is their voice. And when the leadership continually ignores the pleas of the public then it is understandable for people to feel alienated and oppressed in a system that should—according to the popular and somewhat misleading understanding of democracy—be anything but.

This makes people question the point of democracy altogether—you are yet to vote regularly and for the time being your voice goes unheard. What political system does that sound like?

Graham Allison, a professor of Government at Harvard Kennedy School, says that the idea of liberty includes ‘freedom from’ and ‘freedom to’. What we currently see in Nepal is that because of the government’s inability to provide ‘freedom from’ things like exploitation, corruption, poverty et cetera, the citizens are thinking about giving up on ‘freedom to’ means like expression and participation with hopes that a monarch or an authoritative figure might at least be able to provide the former.

Singapore is one country that has found success in such a tradeoff. But then again, Nepal is no Singapore. After many many years, we now find ourselves very close to completing the democratizing process and if we could hold free and fair elections regularly for at least a couple of more election cycles and have stable governments in office serving full terms, then perhaps some of the frustration of people would dissipate. But given the impatient nature of the public, some of whom who do buy into the idea of utopian change, it might be difficult to convince them that reverting from democracy at this stage is not the fairytale option.

The current state might be ineffective and apathetic and it might itself represent autocracy, but it can change if we participate in timely and regular elections.