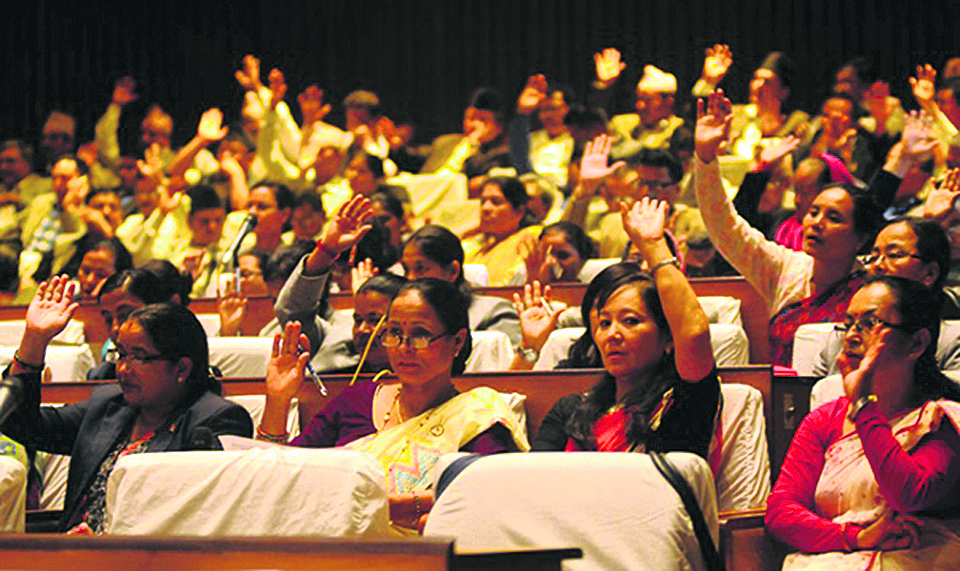 The fact that I, a foreigner, can write this article and it is published is an example of how democratic norms have been rooted in the fabric of Nepali society.

The ongoing political developments in Thailand remind the entire world of the power of youths, of their sheer determination in fighting for freedom and democracy. Until a few months ago, before a new security legislation was imposed, protesting students were also venting their frustration and anger in the streets of Hong Kong. Achieving a better democratic system is a daily effort not only in the Asia Pacific region but throughout the world.

We are about to witness some tectonic changes with discussions going on about revisiting capitalism and its perverse impact on the daily lives of peoples. Should we also reflect about the meaning of democracy? What does democracy really mean in the 21st century context?

It is not only about confirming and expanding the people’s rights but it is also about rethinking how established democratic system, namely the liberal model based on delegation of powers to elected representatives, can really be the best method for the new century. But does such system really guarantee the most effective governance? Are political parties the only indispensable medium to channel people’s aspiration in the decision making?

I believe this is the right time to reconsider the foundations of our democratic system and try to build a better system that could be adopted and adjusted to local circumstances. It is also important to understand why the one party system, itself at least nominally representative of people’s aspirations according to the governments based on it, cannot truly tolerate dissent unlike democracies.

Understandably, country like China might not be prepared to move forward towards a representative democracy but why should it crush dissent? The ultimate purpose for any political system is to allow freedoms to prosper and grow.  I am not talking about absolute freedom that would lead to anarchy but about inalienable rights that allow citizens to fully openly express their opinions without defaming or harming anyone else’s.

Is it possible to forge a system with proper checks and balance that allow people to truly exercise their powers?

In Nepal, once again we have seen that entire political class is not up to the job and many youths are losing their patience and hope. With increasing levels of corruptions and mismanagement, should we call Nepal a less democratic country than, for example, Luxemburg and Norway? But the fact that politicians in general are not doing a good job does not necessarily mean a country is less open and democratic.  Nepal has such democratic openness others may envy. People here can talk freely.

The fact that I, a foreigner, can write this article and it is published is an example of how democratic norms have been rooted in the fabric of Nepali society. This, however, is the outcome of decades-long quest for democracy—anti-Rana Movement, People’s Movement, Maoist Movement and so on.

In a country like Nepal politicians might not like it when citizens write about their corruption and mismanagement but they cannot escape dissent. The same politicians in power are those, in one way or another, who fought for a better Nepal.  In that sense, like it or not, citizens of Nepal owe them gratitude. We should not forget this even when we are frustrated by incompetence often shown by the political class.

Democracy is a work in progress in Nepal and it is so in so many other countries, even those more developed and more assertive of their democratic credentials. Still the real question is not about when the existing political class in power in Nepal will retire. Certainly there might be an almost unequivocal consensus that the sooner a younger generation takes over, the better for the entire country. The real question is if we can rethink the democratic model in line with the federal structure where citizens aren’t only indispensable at the time of voting but on every single day. Promoting the Sustainable Development Goals locally could be a great way of doing the right kind of politics because politics is all about pursuing the common good.

When people, especially the youths, are too tired and too frustrated, they end up in the streets. What is happening in Bangkok and what we saw in Hong Kong are familiar scenes for the vast majority of Nepalis. Should peaceful protests again be the best way to settle disputes and lingering frustrations in this country?

I still believe that there is still room for the current political class, under some bits of pressure, to perform better and decide to transition towards retirement. For sure, protests alone won’t do the job of rethinking and reinventing a more participatory democratic system.

This is a global challenge, not just Nepal’s but perhaps the existing political leadership after their biggest success, the federal constitution, should set the conditions for enabling a new paradigm to take roots where youth and citizens do not just protest and complain but actively participate.

The future of democracy in Nepal and elsewhere is called civic engagement and this country could be at the forefront of such important evolution. A younger political leadership must step up but also every citizen should step up their civic commitment to a prosperous and happy nation.

Democracy was saved but hope is all we have

Hope is all we have. Let’s hope 2022 will be a productive year in Nepal’s journey to peace and prosperity.... Read More...