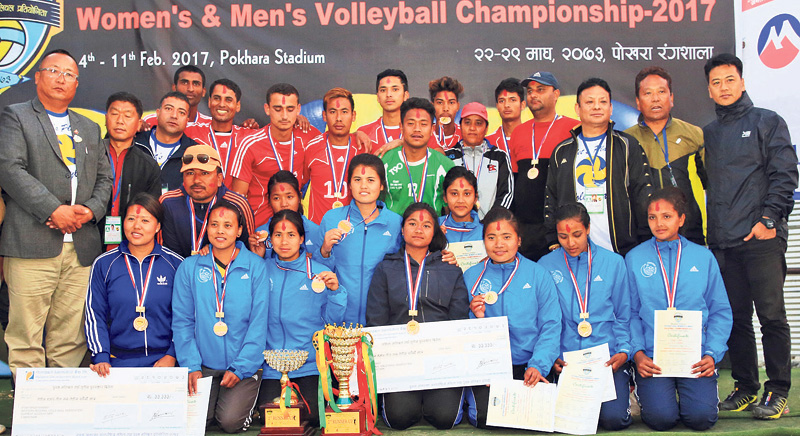 Members of Western Region pose for a group photo after securing third position in both men’s and women’s category of Srijana Invitational International Volleyball tournament in Pokhara on Friday. Photo: Republica

The host defeated departmental sides - Armed Police Force (APF) and Nepal Police Club- with the score line of 3-2 and 3-0 in the men's and women's third place play-offs respectively.

Both men's and women's teams of Western Region bagged Rs 33,333 each.

After the match APF's head coach Prakash Thapaliya accused referee Shankar Thapa of taking side of the home team. “The referee did not make fair decision during the match.

He awarded as many as seven fouls committed by the home team. He applied double standards as he awarded points for our simple mistakes while he did not do the same for Western Region,” said head coach Thapaliya.

Western Region's head coach Kumar Thapa said that his team took advantage of imbalanced APF team which was close to victory after wining the first two sets. “We came back in the game after APF lost coordination. Though we struggled in the early sets we improved in the rest of the match after Ramesh KC came in the lifter position,” said head coach Thapa.

Similarly to claim the third place in the women's event of the tournament Western Region overcame the challenge of Police in straight sets of 25-21, 25-22, 26-24. Western Region's Manju Gurung was declared the woman-of-the-match.

After guiding her team to third place finish, Western Region's head coach Kaushila Khatri said that her players did well in the tournament despite having less time for preparation.

“Police is a strong team but we managed to pull victory as my players played well today. We had to collect the players from different regions and did not have much time to train in order to set the team. If we had sufficient time for training together we would have done better than this,” said head coach Khatri.

Meanwhile, Police's head coach Bharat Shah said that he has a very thin squad and hasn't got game changers on the bench. He also said that his team missed key player Kamana Bista who was ruled out for the match due to the injury. “Kamana is our most experienced player and her absence affected the performance as other players couldn't fill the void. We also don't have enough talents on the bench so it was very hard for us,” said head coach Shah.

Do not assume COVID pandemic reaching 'end game', warns WHO
58 minutes ago