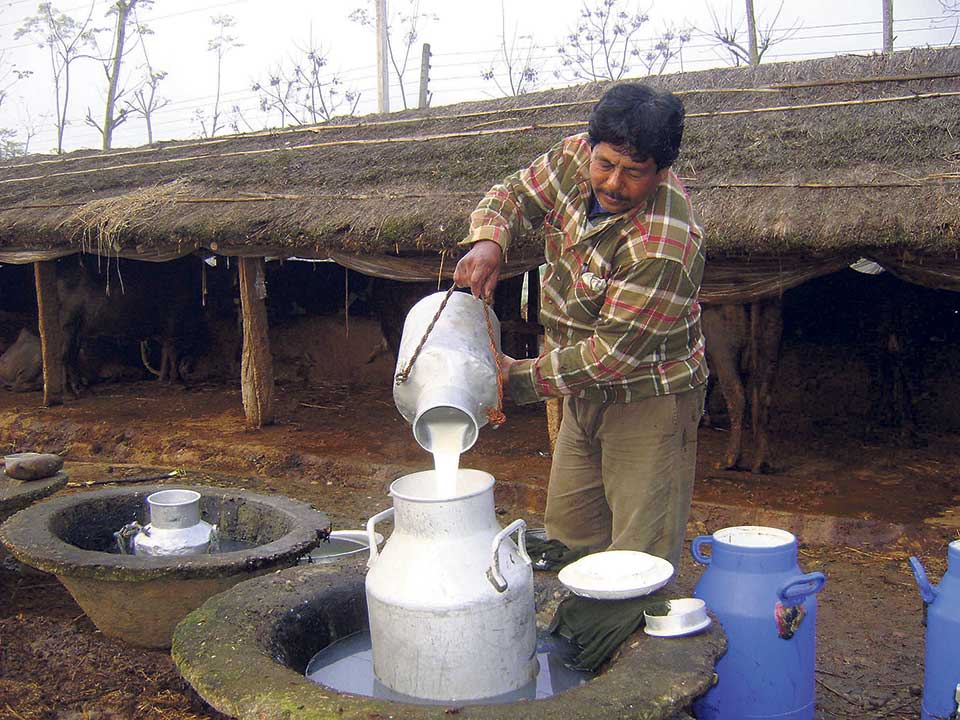 Commit to be fully self-sufficient within two years

KATHMANDU, March 3: Dairy industrialists have urged the government not to open gates for Foreign Direct Investment (FDI) in the dairy sector, stating that the country was on the way to becoming self–sufficient in dairy products.

The dairy industries' concern came in response to the Foreign Investment and Technology Transfer (FITT) Act Amendment Bill 2019 forwarded by the Ministry of Industry, Commerce and Supplies.

Except poultry farming, the bill has proposed to open FDI for all small and cottage industries including livestock, fish farming, bee farming, and dairy industries. Dairy entrepreneurs have said that this initiative of the government discourages domestic industries.

"While we are trying to become self-sufficient on dairy products, the government's decision to amend the FITT Act comes as a discouragement for us," said Ram Krishna Sapkota, president of Nepal Dairy Association (NDA). "Dairy entrepreneurs do not support FDI in this sector as we are becoming self-sufficient with seven percent annual growth."

Currently around 500,000 farmers are involved in this sector and there are 1,850 cooperative organizations across the country, with a total investment of Rs 30 billion and 20,000 direct employees.

According to Bhandari, the current demand for milk is 92 liters per year per person and the country produces 72 liters per person per year, fulfilling 80 percent of the market demand.

Pointing out the announcement of Indian company Amul to extend its products in Nepal, industrialists said that if FDI was opened in this sector, Nepali farmers will be hard hit.

Earlier in July 1, 2017, Amul had announced to start production from Nepal and Sri Lanka.

“Nepal does not lack investment. What is lacking is reliable policy for local investors,” Bhandari added.

“If the domestic industries are fulfilling 80 percent of the market demand then why should the government bring FDI?” Kedia questioned, adding, “Such policy may cause big losses to local industries.”

Meanwhile, former Finance Minister Surendra Pandey said that local industries should not be afraid of FDI as it would bring new technology along with training and skills.

“We are lagging behind in research and new technology in every sector, therefore we need new technologies and ideas to develop our industrial sector,” Pandey said, “We must open FDI in different sectors, albeit with certain conditions.”

Pandey added that both the government and industries should take this as an opportunity to bring in new technology with a condition of technology transfer in future.

KATHMANDU, July 3: After the establishment of one-stop service center at the Department of Industry, foreign direct investment (FDI) of Rs... Read More...