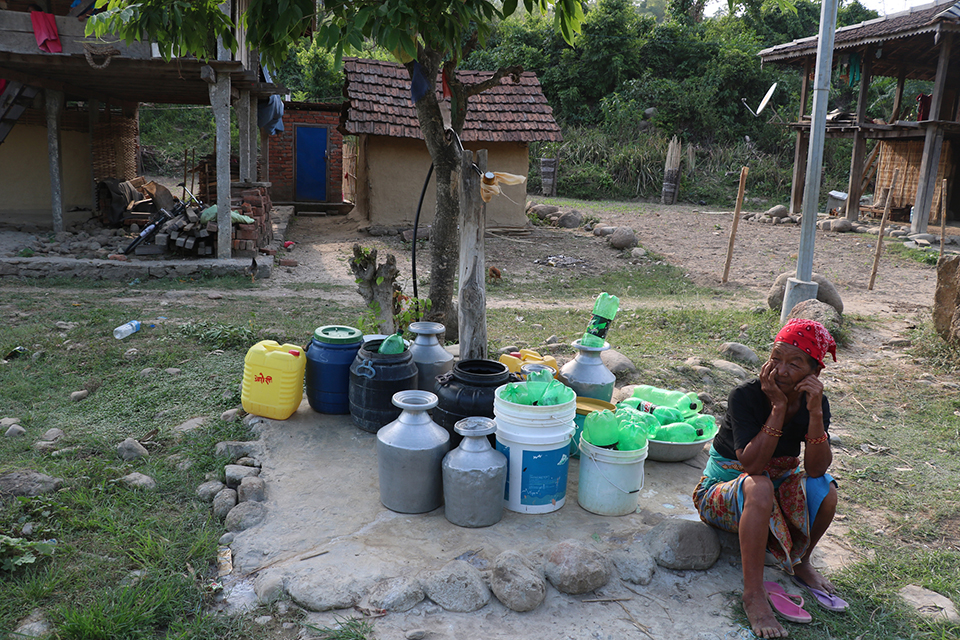 A woman standing in front of a water tap to fetch water. Villagers receive water only in the mornings and evenings. So, they reach the water taps hours before to make sure they don't have to stand in a long queue.

SARLAHI, June 11: Despite being a part of urban Tarai, many villages in the northern parts of Sarlahi are struggling with the scarcity of drinking water. With the wells, ponds and other sources of water in the district drying up fast, locals are obliged to reach the far-flung villages to fetch a jar of water. Many are also relying on contaminated river water for survival.

People living in the villages along the East-West Highway have been forced to deal with this ordeal for the past few years. Tom Bahadur Ghising, chairperson of the consumers' committee of an under-construction drinking water project in Atrauli says people are in trouble as more sources of water dried up this year.

"This year, we may have to die due to the shortage of water," said Ghising, adding, "We had some sources of water until last year but they dried up now." He laments that people are dealing with this problem due to the delay in the construction of the drinking water project.

"The project kicked off two years ago but it has not picked up pace - due to the negligence of the contractor and also due to the lack of budget," Ghising added. Buddhiman Bal, secretary of the committee, informed Republica that the villagers can fetch water from the tap only in the morning or evening. But the water is so little that it is barely enough for cooking.

"We have been providing some water to the locals from a few sources in the hills," said Bal, adding, "However, that water is not enough." There are only a few taps in some villages. As the people can fetch water from community taps from 5 to 7 am and 5 to 7 pm, the villagers stand in queue from early in the morning for water. It is their everyday routine.

Most villages in the Chure area such as Harion, Bagmati, Lalbandi and Ishwarpur are suffering from a shortage of drinking water. Hundreds of villagers here are found reaching other villages on cycles or on foot to fetch a jar of water.

Meanwhile, engineer at the Drinking Water and Sanitation Division Office, Malangawa, Shiva Shankar Rauniyar said that the project has stalled due to the lack of budget. He blamed decreasing budget for the delay in most of the projects.

SARLAHI, July 4: The body of the youth who died in a police firing near Banke forest of Sarlahi and a... Read More...