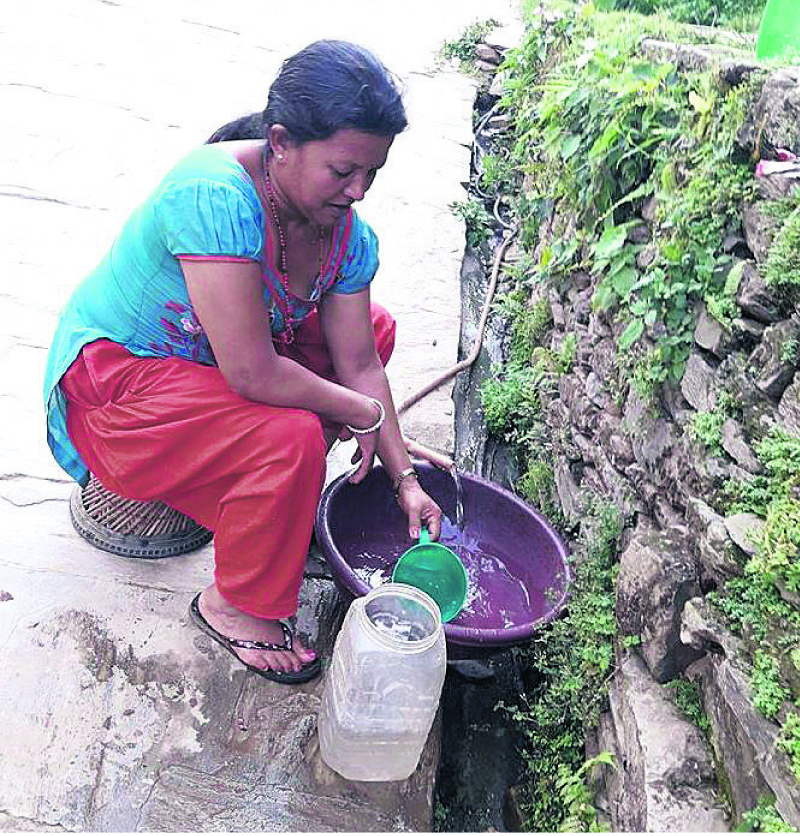 Even though monsoon has begun, water sources in this town, seated on top of a hill, are yet to revive.

According to Joshi, water discharge from Tamu River has reduced by nearly half. “We were bringing 300,000 liters per day from the source which lies 7 kilometers way from the town. Now, we are getting only around 150,000 liters,” he added.

Sita Thapa, a homemaker, told Republica that women like her were facing difficulty due to shortage of drinking water. “Our taps have run dry. We have to travel to faraway places to fetch drinking water,” she added. Another local, Sangita Pradhan, said women like her fill up water pots by using kitchen utensils like bowl and jugs which is time consuming.

Kishan Pradhan, a local tourism entrepreneur, said scarcity of drinking water has affected people in Depchedanda, Piplegaun and Bandipur for the past few months. Similarly, most of the hoteliers say their service quality has been affected due to shortage of drinking water. “Some hoteliers are bringing water in tanker from as far as Dumre Bazaar which is eight kilometers away from Bandipur,” Bainsa Bahadur Gurung, president of Tourism Development Committee, Bandipur, said. “I am a hotelier myself. That water that we are getting is enough to serve only four customers. He further added that most of the hoteliers like him were using tankers to bring water from Dumre.

Water shortage has affected hospitals, police stations and government offices alike, according to Patthar Pradhan, a local of Bandipur.

Water scarcity is a perennial problem for Bandipur that sits on a hilltop.
Ananda Man Joshi, president of a local consumer committee, said that the committee was doing its best to end shortage at the earliest. “The source itself is small. And supply is affected because of landslides,” he said, adding: “There is no alternative to going for deep boring as there are not reliable water sources in and around Bandipur.”

Russia registers virus vaccine, Putin’s daughter given it
23 hours ago

Is Nepal's coronavirus different from the rest? A study will unravel the mystery of the virus structure at the genetic level
3 hours ago

Three killed, 33 others injured in bus accident in Doti
2 hours ago