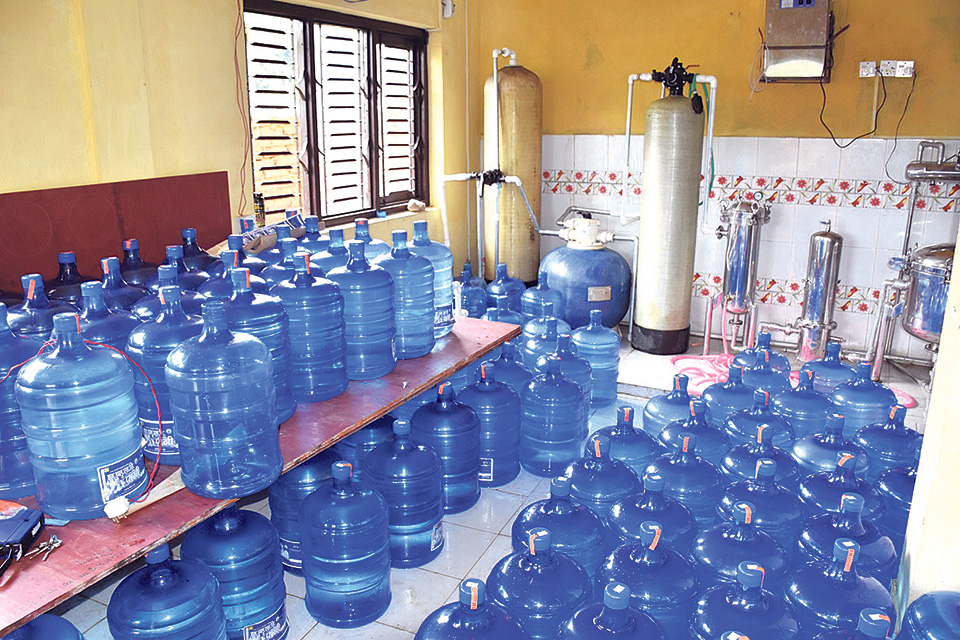 BANEPA, August 28: Nepal Water Supply Corporation has started sale of bottled mineral water under the brand name ‘NWSC Pani’. The corporation’s officials have said the water supplied in jars have received a good response from the market.

The plant, recently installed at the corporation’s Panauti branch in Kavre district, can produce 2,000 liters of water per hour.

In the first phase, the plant operates only in two shifts, according to Buddha Ratna Maharjan, chief of the corporation’s Kavre branch.

This is the first time the government-owned water authority has produced bottled mineral water. Each jar is of 20 liter and the price is Rs 47 per jar. The commercial production started on June 16.
“We are now supplying mineral water to the Ministry of Home Affairs in Kathmandu,” Maharjan said: “We have received demand from other ministries also.”

Banks and several other offices in Panauti and Banepa have started using NWSC Pani. Banks of Banepa like Sanima Bank, Global IME Bank and Agricultural Developmental Bank are buying it since its production.

“We have also received response from several corporate houses and offices in the local market,” added Maharjan.  The corporation’s plan of producing mineral water is not new. It had acquired private land at Panauti for producing bottled mineral water years ago, but the plan did not take off for four years though a building for installation of water processing plant was built after acquiring the land.

Maharjan claimed that the water is produced based on Nepal Drinking Water Quality Standard and standards of World Health Organization. The water of Mulkhola and Haridol has been brought to the plant through pipeline.

There are two chemists working in two shifts, who supervise and analyze water production. “Though this is mineral water, Nepal Bureau of Standard and & Metrology has not allowed to write ‘mineral’ on the jar label,” said Maharjan. The corporation officials have claimed that the water is of high quality.

A total of Rs 10 million has been invested for installation of the plant. Minister for Water Supply and Sanitation Mahendra Yadav inaugurated the plant on Friday. Speaking at the inauguration event, Minister Yadav also directed the corporation staff to do the needful to supply water in one-liter bottles. The corporation officials said that they have mainly targeted to supply to the government offices, diplomatic missions, and other similar institutions.