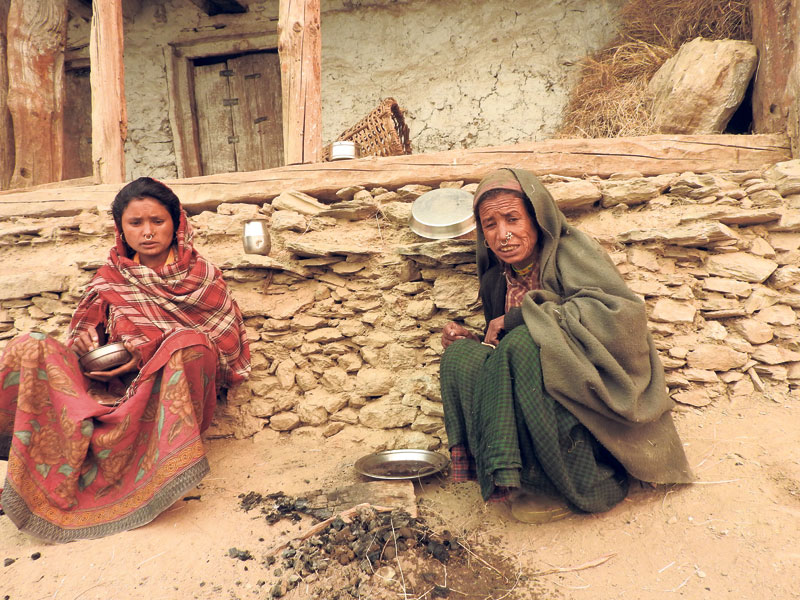 Two women of Khyalcha village of Gima VDC having their meal outside the house during menstruation. People in the far-flung areas still follow the tradition even though the practice is declining among the VDCs nearby the district headquarters. (Suman Malla/ Republica)

MUGU , Oct 25: In what appears to be a positive sign for social change, shamans of the district have joined the campaign to abolish social stigma around menstruation.

Earlier women used to get confined to a shed during their periods. People used to be superstitious, considering menstruating women as “untouchables”. The situation has changed now.

There is competition among locals to declare their village a “Chhaupadi-free zone”. Six village development committees (VDCs) of the district have been organizing various activities to abolish the tradition.

One example is Sobha VDC, which was declared a Chhaupadi-free village in 2013. Shamans, who once used to direct locals not to touch women during their periods, have now been involved in anti-Chhaupadi campaign.

“I used to avoid the areas tread by menstruating women. I wouldn't touch them or eat the things touched by them, thinking that it will displease the deities. But now that times are changing, I don't follow that practice anymore. I have been going from door to door to educate the villagers regarding this matter,” said Tirtha Bam, a shaman of Pina VDC, ward number -5.

According to this custom, women shouldn't consume dairy products or enter the house during menstruation as doing so will irk the deities of the household. They are sent outside to live in makeshift tents during this period which lasts for 5-7 days.

“I haven't seen anyone follow this practice in our village since three years. When people heard of Sobha village going Chhaupadi free, they decided to do the same here. Even the shamans, who had been propagating this practice for centuries, are now working hard to abolish it,” said Dharmadat Buda of Rowa VDC, ward no-7.

“This practice of excluding women during menstruation has been declining steadily due to several factors like mass education, support from government and non-government organizations, and individual initiatives,” said Bhagwati Giri, head of Children and Women's Welfare Committee.

Only essential services to remain open from today
53 minutes ago