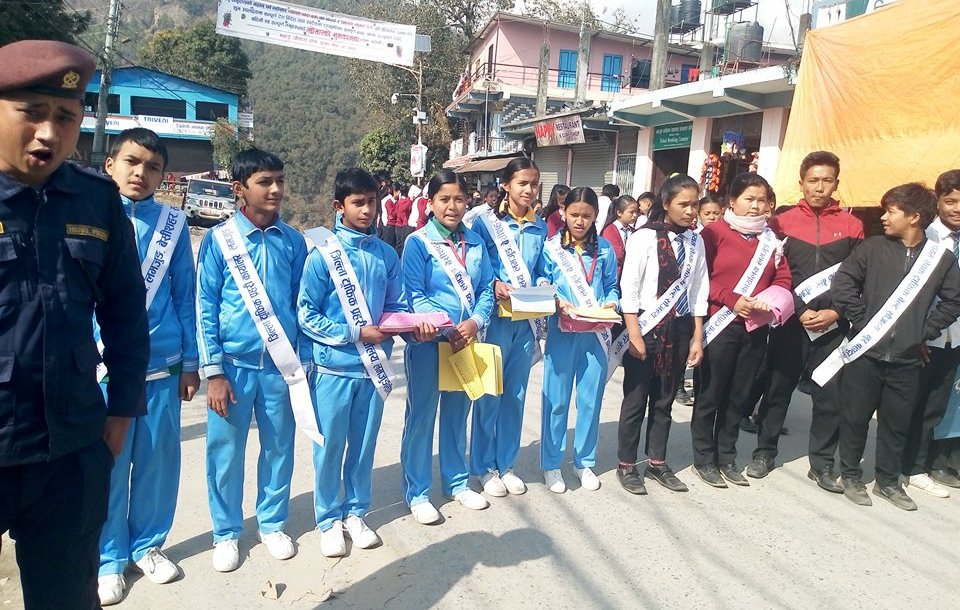 Students and local traffic police are in the road to raise awareness with pamphlets and brochure. (Kishan Sangeet/Republica)

LAMJUNG, Jan 30: Students have started an awareness campaign for driver and pedestrians following the increment in the road accidents in the district.

One of the participants Saroj Ghimire informed that they organized the campaign awareness in Manange Chautara, Bhimsensthan, Narayansthan, Jhingekhola and Sere Bajar of Besisahar. He said, “The accidents are increasing due to the carelessness of drivers and pedestrians, so we conducted awareness programs to make them responsible and attentive."

During the campaign, they distributed posters, pamphlets and stickers about traffic rules to the pedestrians and driver. The campaign was jointly organized by Office of District Traffic Police and Community Service Center Besi Sahar. “The solo efforts of traffic police is not enough to minimize road accidents, so different awareness campaigns are being conducted with the collaboration of schools, campuses, community service centers, youth clubs, social organizations and local mother groups”, said traffic constable Bhumiraj Ghimire. According to Ghimire, the road accidents are decreasing in the district following the conduction of such programs.

Re-enrollment campaign in Khotang to bring students to school