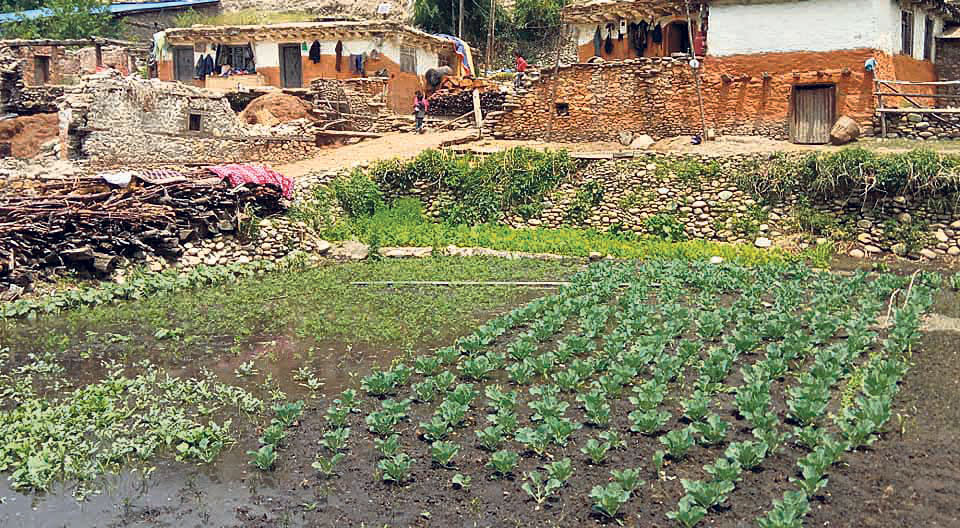 A vegetable farm in Jumla in this recent photo. Farmers in Jumla have switched to vegetable farming after finding it more profitable. Photo: Republica

JUMLA, May 11: It has not been very long since Samjhana Devkota of Talichaur village started vegetable farming. Just like other village folks, she was accustomed to growing only crops in her field before.

"I never thought that growing vegetables could be so profitable. Or else, I would have done this before."

The middle-aged woman is financially sound despite discontinuing her studies at a young age. She not only sends her kids to a good school but is also capable to give loan to relatives and neighbors.

Except for a little break time which she takes for household chores, Devkota gets busy in her vegetable farm from dawn till dusk. But working in the field so much relentlessly does not exhaust her but keeps her more energetic.

"When you are sure of a good return, you work happily. Vegetable farming has brought fortune to my family," Devekota said, adding, "The more I work dedicatedly, the more satisfied I feel."

Although she has a few helpers, she takes the lead while preparing soil, cultivating plants, watering them and finally harvesting.

"Actually, I make sure that everything happens under my watch," she said.

Devkota grows vegetable in over 10 ropanis of land. Earlier when she used to grow paddy in this field, her investment would be costlier than the return.

"What I harvested before didn't last for long. There would be no profit at all if I calculated the time I spent in the field. We did not know back then that vegetables are more suitable for our land."

Her neighbor Radha Neupane switched to vegetable farming four years ago. Since then, Radha has not looked back.

"Earlier, we had to struggle for survival. Crops would not suffice even for half a year. Now, everything has changed due to vegetable farming," she noted.

Neupane however has a complaint. Vegetable farmers in Juma would have made much more profit had there been a proper irrigation facility.

"We are making good profit even now. But we have to work very hard for it. Due to the lack of irrigation facility our efforts are quite centered on managing water," said Neupane. "If there had been irrigation facility, we could have utilized our time to expand our farms," she added.

Vegetable farming is getting quite popular in Jumla villages. In Tilachaur village alone there are close to 50 households who are involved in vegetable farming. All of them used to grow paddy in the fields earlier.

According to Mayalal, vegetable farming is now becoming a means of prosperity for Jumla locals. If better marketing and distribution of fresh vegetables from Jumla is ensued, there would be a dramatic change in the economy, he remarked.

The farmers commonly grow potatoes, onions, cabbages, carrots, beans and green vegetables. They claim the vegetables are organic. No wonder, the vegetables have a good market. "Our market is Khalanga bazaar," said Mayalal.

The locals feel that there is a need of better transportation service so that the vegetables could be sent away to other cities. "For this, we need storage facility and other technologies to keep vegetables fresh. Then we can think of producing vegetables in huge quality," added Mayalal.

From Khalanga bazaar, the vegetables reach as far as Mugu, Kalikot, Nepagunj and even Kathmandu. But the farmers hardly know more about it. They sell it to the wholesalers in the bazar.

"We do not have a direct access to the businessmen. So middlemen take huge profit," said Mayalal.

Meanwhile, another farmer Jiwan Bahadur Neupane lamented that the producers are not getting even half of the profit they deserve. "If you talk about government's grant distribution, it does not even reach the farmers," he said.

Farmers in Jumla expect better facilities so that they could grow by leap and bounds. "Our villages these days look like a vegetable garden. Even tourist loves the site and captures photos. But to make it really a successful venture, the government must give us subsidies, grants and provide other necessary facilities," said Neupane.

KHOTANG, April 17: At a time when thousands of people from the rural areas are opting for foreign employment due to... Read More...

JHAPA, Jan 16: Many small-scale tea farmers of Jhapa are leaving the profession due to rising cost of production, a decline... Read More...

Rain with thunderstorm predicted for today
24 minutes ago