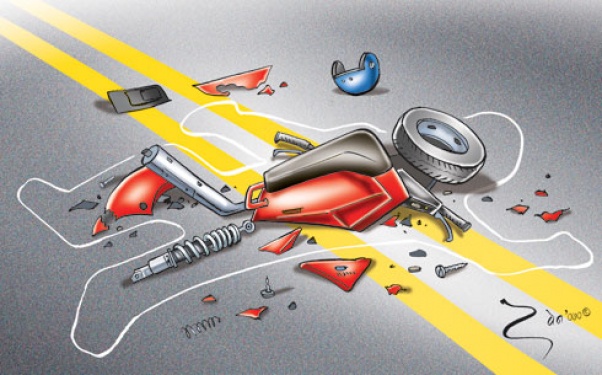 KATHMANDU, Jan 21: Road accidents in the Kathmandu Valley have claimed 132 lives in the first six months of the current fiscal year, indicating a sharp rise in the number of road fatalities.

According to the data maintained by police, the number of fatal road accidents has surged by 36 percent this year as compared to the average semi-annual data on road accidents of the last fiscal year.

Meanwhile, police informed Republica that 194 people had lost their lives in road accidents in Fiscal Year 2017/18.

Chief of MTPO Senior Superintendent of Police (SSP) Basanta Kumar Panta informed Republica that the newly widened Koteshwar-Kalanki road section, a part of the ring road, has seen a massive number of road accidents taking place since it was opened.

“Road accidents have increased in the past six months due to the unscientific and unsafe nature of the newly constructed roads,” he said, “In this regard, the newly widened Koteshwar-Kalanki road section is a dangerous road.”

The construction works for the expansion of the 9.5-kilometer stretch of road was started from May 2016 with Chinese funds.

According to SSP Panta, a majority of accidents take place in the road section due to over speeding.

“The road signals on the section are very difficult to understand in addition to the unchecked over speeding that takes place on the road section,” he told Republica.

He claimed that the MTPO is currently working on bringing out a new program in order to control road accidents.

KATHMANDU, Jan 20: The Kathmandu Valley needs the installation of CCTV at 21,441 locations. A recent study by the Metropolitan... Read More...

KATHMANDU, Jan 19: Volunteers collected 36 metric tonnes of waste in course of cleaning the various rivers and the Ring... Read More...