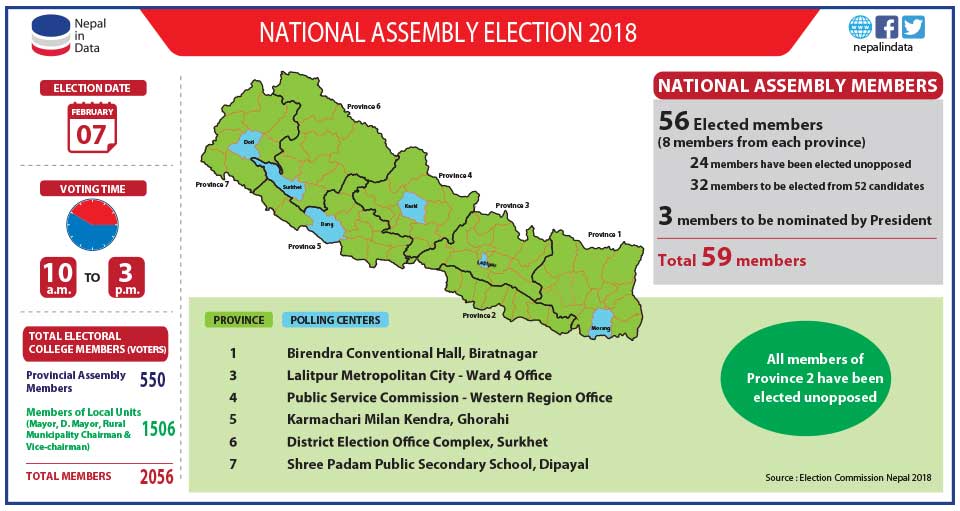 KATMANDU, Feb 7: Two months after completion of the parliamentary and provincial assembly election, the Election Commission (EC) is conducting the National Assembly (NA) poll on Wednesday.

On the eve of the NA poll, the election body said that the stage is all set for the upper house election. “All preparations for the election have been completed. The government has arranged foolproof security, so we urge all voters to exercise their rights without any fear,” Chief Election Commissioner Ayodhee Prasad Yadav told reporters at the EC headquarters while briefing them about the poll preparations on Tuesday.

Constitutionally, there will be a 59-member upper house. Out of the total 59 members of the upper house, the election will elect 56 members while the government itself will nominate the remaining three members.

All eight members from Province 2 and 16 from other provinces have already been elected unopposed. Since some members of the upper house have already been elected unopposed, election will take place in six places where the government has established high courts. As per the poll schedule, the upper house election will be held in Morang, Hetauda, Pokhara, Dang, Surkhet and Dipayal, according to election officers.

The election slated for Wednesday will elect the remaining 32 members. According to the details provided by the provincial election officers, 52 candidates from 13 parties are contesting for the remaining 32 seats of the upper house.

As per the constitution, each province elects eight members whereas the government nominates three National Assembly members. Chiefs and deputy chiefs of 753 local units and members of the provincial assembly will elect the upper house through single transferable voting system.

Citing ambiguous constitutional provisions regarding formation of the new government, the election body has refused to allocate PR seats obtained by the political parties for the central parliament. This has delayed power handover to the poll wining parties.

The election body has been facing criticism from all quarters for delaying releasing the poll results.

Concerned over the criticism, the election body has deployed separate teams from the central level to assist poll officers in releasing timely results. Also, it plans to handover poll results to the president immediately after the vote counting for the upper house is over and clear the way for formation of new government.

“The EC is committed to handover the results of all polls to the president within February 19,” said CEC Yadav.

After the submission of poll results, the party commanding majority will urge the president to let them form the new government.  Despite releasing poll results under the first-past-the-post electoral system, the EC has not allocated parliamentary PR seats so far.

Elections of speaker, upper house chair ahead of presidential election

KATHMANDU, Feb 28: The parliament secretariat has been asked to plan the election of speaker and deputy speaker of the House... Read More...

Rainfall likely to continue for three more days
18 minutes ago