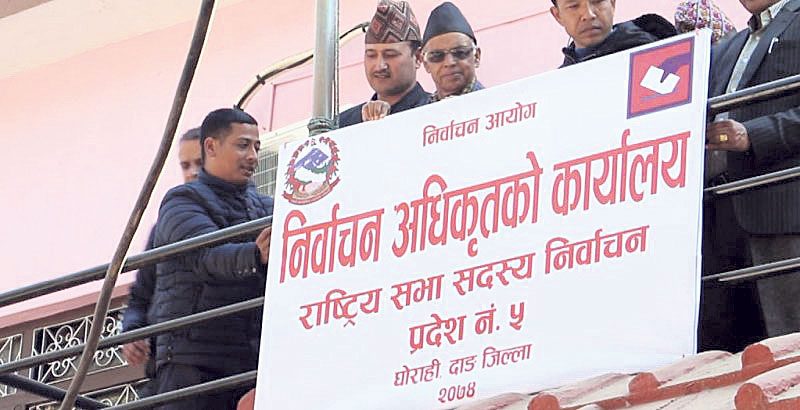 Government officials setting up an office of returning officer in Dang on Saturday.

KATHMANDU, Jan 14: As part of its preparations to conduct the upper house elections, the Election Commission (EC) on Saturday set up the offices of returning officers in all the seven provinces.

Upper house elections scheduled for February 7 will be conducted in all provinces.

Returning officers' office for Province 7 has been established in Doti.
Voters from across the province concerned will have to go to the offices of the returning officers to cast their votes. Chiefs and deputy chiefs of 753 local units and 715 members of the provincial assemblies elected under both the first-past-the-post electoral system and proportional representation category will elect the upper house through the single transferable voting system.

Of the total 59 members of the upper house, 56 will be elected through election while the government will nominate the remaining three members.
Altogether 21 parties have registered for the upper house elections. They will have to file nomination on January 24, according to the election calendar released by the election body.

Army personnel to be involved in upper house poll security

KATHMANDU, Jan 23: A meeting of the High-level Election Security Committee has decided to involve all security agencies including the Nepal... Read More...

KATHMANDU, Jan 3: As part of ending the ongoing row over the process of forming the new government formation, the government... Read More...