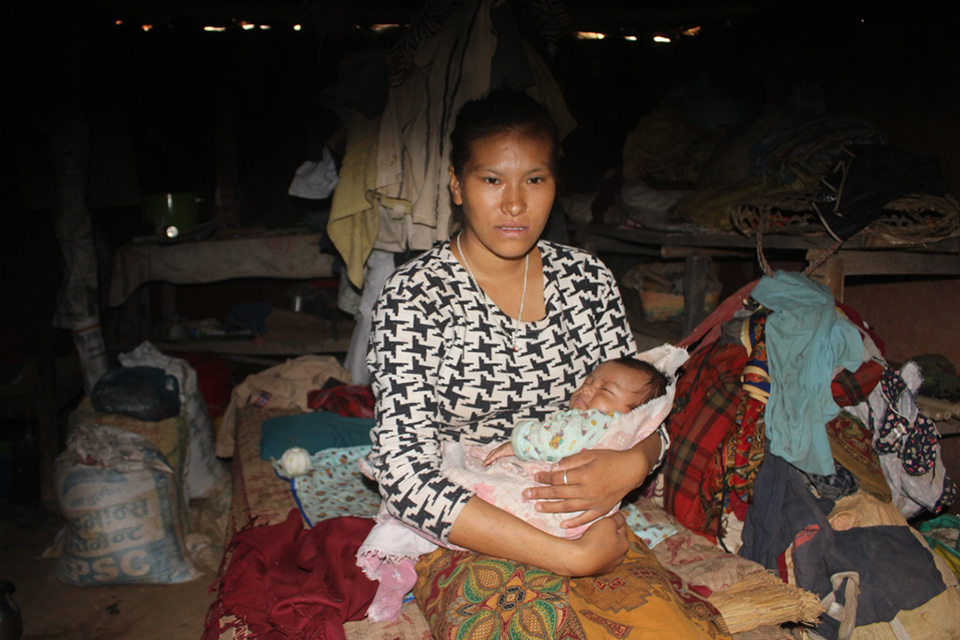 GORKHA, Oct 3: It is not easy to imagine how a woman could live inside a congested makeshift hut with just tarpaulin to cover the roof while taking care of a one-month-old newborn. The situation becomes even more difficult without sufficient nutritious diet and proper sleep. Yet, such is the situation of an unmarried woman who just gave birth to a newborn in Gorkha district, the epicenter of the catastrophic 2015 earthquake.

Let alone the nutritious diet, she is sometimes forced to sleep empty-stomach due to lack of food. There also isn't sufficient clothes for the baby, depriving the newborn of proper sanitation. This is the story of Srijana Ale, 20, of Gorkha Municipality-4.

She gave birth to the child on August 9. The problem is that she is unmarried and the father of the child is missing. Due to this, her society did not accept her. Since giving birth, Srijana has been looked down upon by her family and society. She would not get food without begging.

“I'm continuously being told to leave the tarp-hut. They tell me to leave every single day,” said Srijana with tears rolling down her eyes. “We have been living under tarpaulin after our house was destroyed by the quake. But my family has refused to reconstruct the house until I leave. They do not want me to stay with them.”

Sharing her story, Srijana said she had a relation with a man from Bhimsen Thapa Rural Municipality of the district. They would meet sometimes and talk over phone. However, he broke the relationship and went out of contact after finding about her pregnancy.

According to her, the man works as driver's assistant in a public vehicle. After he went out of contact, she could neither go out to find him, nor would her family help her. Her mother scolds her every time demanding the identity of the man so that they can send her away to him at the earliest.

Srijana and her child both are sick due to lack of proper care. The eyes and mouth of her child have swollen but her family has not offered any kind of medical help.

“Please help me find the child's father. It's unbearable living here,” she requested.

KATHMANDU, March 22: Minister for Health Gagan Thapa has praised the role of the social activists and social workers for... Read More...

Celebrity news reports over the past four decades may have contributed to the changing makeup of the traditional family and... Read More...