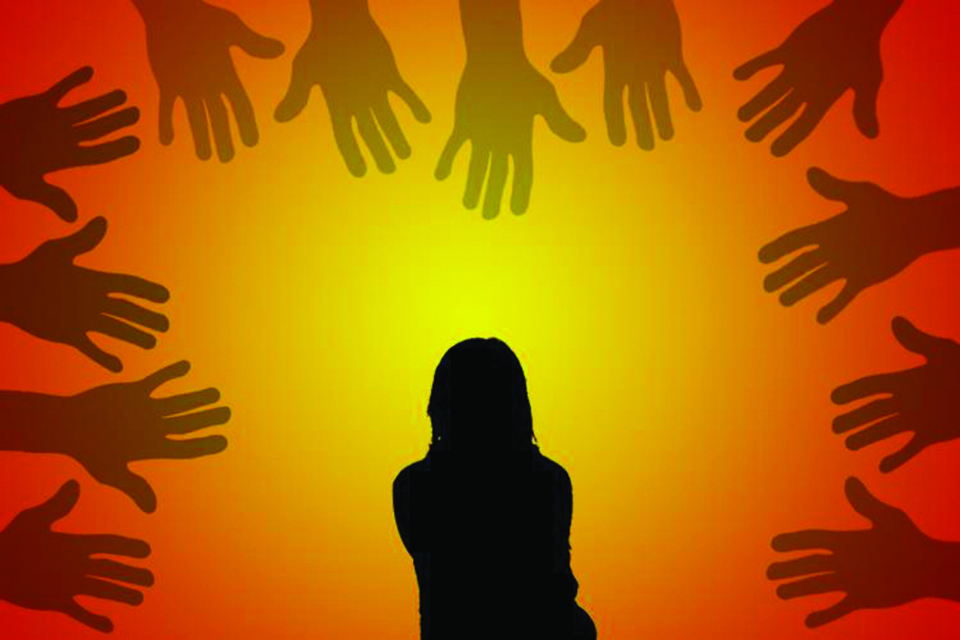 The author writes on women and youth issues
news@myrepublica.com

Rather than the victims, rapists should be persecuted, ostracized and humiliated. Survivors need support both from the state and the society

On an average, four girls and women are raped every single day.  According to the data of Nepal Police, 1480 rape cases were registered last year followed by 720 attempted rape cases.  Despite pervasiveness of sexual crimes, laws are not systematically enforced. So women in Nepal feel insecure in our society.  Rape survivors also lack adequate health service, counseling and legal assistance.  If women are not safe how can we achieve sustainable development?

Women are more likely to be victimized when they are seen only through sexuality. In our patriarchal society, men feel superior to women and exercise their authority over women. Feminists from around the world argue that eliminating patriarchal gender norms is the most important step in eliminating the widespread prevalence of rape. In Nepal, we have not been able to challenge these norms.

According to the statistics, mostly 11-16 age group girls suffer sexual violence and perpetrators in 90 percent of these cases are none other than their family members, relatives and neighbors. The heinous social crime of rape has defamed our country globally. Rape incidents of Nepal have started to become headlines in the international press.

It is necessary to raise public awareness about sex assault among girls and women. There should be open discussion on sex and sexuality and we must stop blaming girls, their behaviors and their dress up for rising crimes of rape. Because we hold such negative perceptions about women,    survivors of rape are also silenced in our society. We need to change this mindset.

Rather than the victims, rapists should be persecuted, ostracized and humiliated. Survivors need support both from the state and the society. Victims suffer from grave physical, mental and emotional consequences, which may even lead them to suicide. This is why we need to stand with the victims all the time.

The rape and murder of 13-years old Nirmala Panta has triggered explosion of outrage across the country. Central government paid attention to this case only after protests erupted in Mahendranagar and one of the protestors lost life. Prime Minister KP Sharma Oli has promised to book the guilty and provide justice to the victim but there has not been any progress in it as yet.  The movement ‘rage against rape’ has brought people’s anger against this crime out onto the streets.

The government’s delay in investigation has further enraged people.  The inability to provide justice to Nirmala has led the government to failure path. The number of rape cases is rising across the country. Even eight and nine months old children have been targeted.

The United Nations data suggests “a third of women worldwide have suffered sexual or physical violence, and one in 10 girls have been raped or sexually assaulted”.  And International Human Rights Organizations have revealed “the inadequacy of laws all over the world to protect women and girls against sexual violence.” “Many laws around the world do little to deter violence against women.” In Nepal, new Civil Code has come into effect and it has defined rape as criminal offence. But the punishment for rapists is not strong enough. Minimum punishment in case of rape is imprisonment of four years, depending on age of victim and circumstance of rape. In case of rape of girl below 10 years, punishment will be imprisonment for 10-15 years.

If the rapist murders the victim after rape, then the culprit will get life time imprisonment. First of all, this unequal provision of punishment is unfair and second, the government has failed to protect our daughters. We need to enforce our laws strongly to make the girls and women feel safe.

It is good that members of civil society and people from various walks of life have united against rape. They are protesting regularly. Now is the time for the government rise to the occasion.

If the government fails to enforce laws and instead traumatizes the victims, it will further agitate the people. We all need to stand together to fight this heinous crime against humanity. It is time to rise, from every corner and from every place, to create a better society for women and girls.

The author writes on women and youth issues

Can investments be efficient?

At a time when protectionism is on the rise, the risk of trade disruptions is only increasing ... Read More...

Unless and until the selfishness and myopia that define our politics is overcome, an economy that serves the many, rather... Read More...

Fresh mandate a must for peace, stability and development: Prez Bhandari
16 hours ago