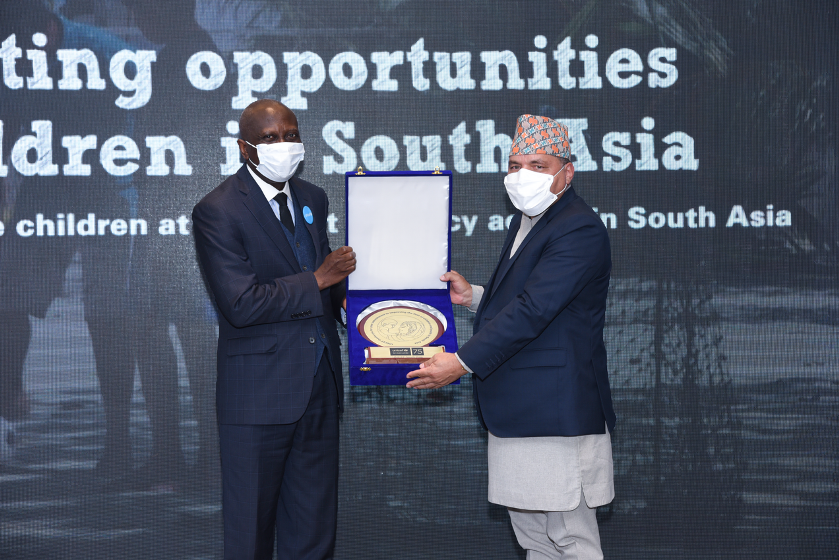 KATHMANDU, Dec 10: While highlighting the disproportionate impact that the pandemic has had on the most marginalized of the region’s 600 million children,  a UNICEF report “Reigniting Opportunities for Children in South Asia,” launched recently coinciding the 75th anniversary of the UNICEF's creation has called for urgent action.

The launch event co-hosted by UNICEF and the South Asian Association for Regional Cooperation (SAARC) was attended by ministers, decision-makers, influencers and young people from the region, to renew commitments to the Convention on the Rights of the Child, and accelerate action on issues impacting children across South Asia.

According to a press statement issued by UNICEF, the report highlights the terrible price children are paying not only as a result of COVID-19 but also due to the climate crisis and humanitarian disasters affecting the region. Such has been the impact on children’s education, health care, nutrition, and protection services that the hopes and futures of an entire generation are at risk.

In the developed countries, COVID-19 vaccination rates are steadily increasing, and wealthier economies are recovering. But in South Asia, the picture remains bleak. Just 30 percent of people in South Asia are fully vaccinated against COVID-19, leaving families dangerously unprotected as new variants continue to emerge. While the region braces itself for future waves of the virus, more children and families are slipping into poverty, according to the report.

Prior to the pandemic, South Asia was one of the world’s fastest-growing regions and was making major advances in child survival and health, education, protection and other areas. The report points out that these transformative gains for children are now at risk of being erased - and the poorest, most disadvantaged children will suffer the greatest setbacks.

At the same time, the pandemic has created opportunities, which - if capitalized on today by decision-makers - can prevent further rollbacks for children and kick start recovery. "Today, we have a unique opportunity to do things differently, and build strong and adaptable health, education and protection systems that meet the needs of all children. By acting now, we can ensure every child in South Asia not only survives but can thrive," adds the press statement.

UNICEF has also called on governments and their partners to seize these new opportunities and make the best investment they can ever make – to invest in children. "To make it happen will require new and strengthened partnerships between governments, the business sector, civil society and UN agencies. It also requires the active involvement of children and young people themselves. Their strength, creativity and solutions give renewed reason for hope," it said

The report is supplemented by essays in which children, young people and experts from the region, as well as UNICEF’s Regional Ambassador, Sachin Tendulkar, share their thoughts on the future of childhood in South Asia.

KATHMANDU, June 20: For the first time in Nepal, a vaccine against COVID-19 arrived on Sunday that can be administered... Read More...

KATHMANDU, March 13: The UNICEF Nepal has said that characterizing COVID-19 as a pandemic is not an indication that the... Read More...