UML’s success owes to linking of blockade with statute amendment 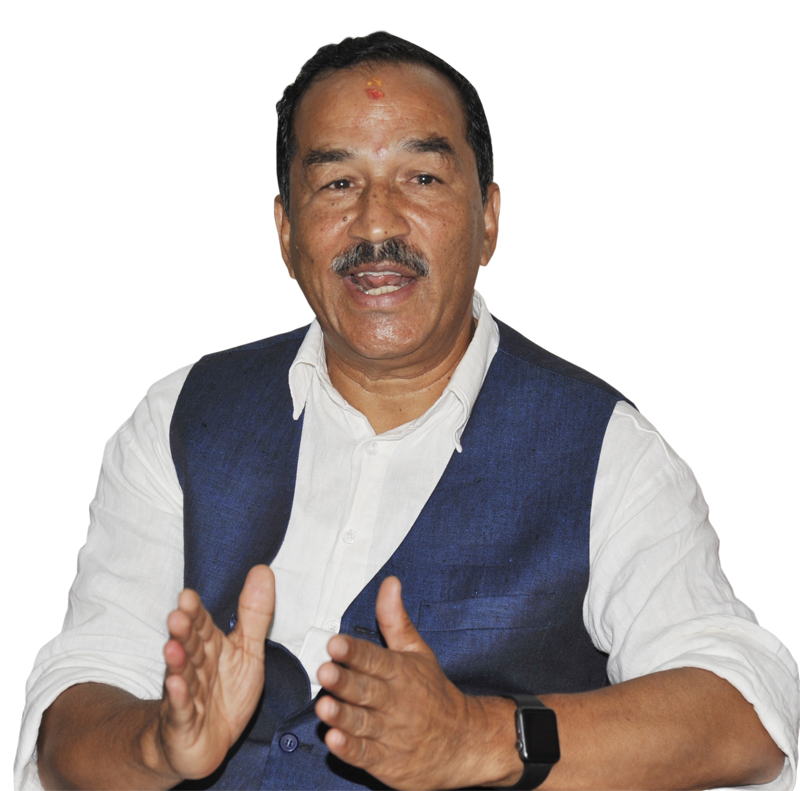 It is said that one reason the ruling Congress-Maoist coalition could not muster two-thirds majority in favor of the constitution amendment bill was the vacillating stand of Rastriya
Prajatantra Party (RPP). Was RPP, as a party, in favor of or against the bill? Is it even one united party? Is it joining the government? What is its stand on key political issues? RPP
President and former Deputy Prime Minister and Foreign Minister Kamal Thapa shared his views with Biswas Baral and Mahabir Paudyal.

You were in a position of a kingmaker on constitution amendment. But RPP seemed a divided house on the bill. Why so much confusion?

In broader national interest, we had always been in favor of constitution amendment. Actually, the amendment bill in question was registered with our support, while we were in the government. So we were morally committed to it. Yet, there were two important aspects to the amendment motion that we must not forget. First, amendments had been proposed even over the amendment bill. Second, there were some differences over the content of the bill in our party. Prime Minister Sher Bahadur Deuba and Maoist Center Chairman Puhspa Kamal Dahal had requested us to vote in favor of the bill and we had told them in no uncertain terms that we were morally committed to it.

Some of your MPs were absent when the bill was to be put to a vote. How do we see this?

Actually, the constitution amendment bill had not been put to a vote in parliament. And those parliamentarians who were said be absent had actually been absent in a parliamentary party meeting, not in the parliament itself. There are differences in all political parties. But when the party as an institution makes a decision, all its members are obliged to stick by it.

Let us talk about the results of the two phases of local elections. They didn’t go exactly as planned, did they?

True, the results of local elections were disappointing for us. There are various factors behind this and we will assess them and try to correct our mistakes. But let me also tell you this: There had been a planned and organized effort to sow misperceptions among the electorate about our principles, ideologies and our stands on important issues. We failed to clear those misperceptions on time. This could also have contributed to our loss.
Some attribute RPP’s poor showing to its unclear stand on constitution amendment.
Let me reiterate my position. The five issues that had been proposed in the amendment bill did not in any way jeopardize our national interest. Amendment was not our agenda. But we still supported it because the passage of the bill would have helped bring Madhes-based forces on board. There should thus be no confusion on this front.
Also, I believe you need to see the amendment proposal in a larger context. Separatist elements in Madhes are slowly gaining ground. It was thus important to stop mainstream Madhesi forces from tilting towards those extremist elements. Moderate forces need to be brought to mainstream and radical and extremist forces must be isolated. It was for this purpose that we supported the bill, and we still do.

Do you think the results of the two phases of local elections vindicate CPN-UML’s stand on constitution amendment?

No doubt the stands UML took on key national issues played a role in local elections. But look at the big picture again. The events of the past one and half years threatened our national unity, national interest and national integration. There are two views on how to tackle that challenge. One is reflected in the nationalist stand of UML. The other view is that moderate forces need to be taken into confidence through timely amendment. We believe in the second view. This is a truly nationalist stand. But we failed to properly communicate this to the people and to make them believe in our cause. The day we are able to clearly communicate this to the people, that the issues incorporated in the amendment bill are in no way anti-national, and that this is the only way to bring the disgruntled Madhesi forces within the constitutional framework and isolate extremist forces, that day our position will be vindicated. It will also strengthen national unity.
There is also another factor to UML’s popularity. The Indian economic blockade created a strong anti-India sentiment in Nepal. People then started seeing the amendment bill through the prism of the blockade. This created a perception that amendment was India’s project or was being done to appease those who subjected Nepalis to untold sufferings or those who supported or provoked India into taking such extreme measures against Nepal. This is why the amendment bill was viewed as not in Nepal’s interest.  We need to clear this illusion.

But didn’t UML and Oli steal your nationalist thunder? The Kamal Thapa of the blockade days was nowhere to be seen on the eve of the elections.

I am still proud of the way I (as foreign minister) and K P Oli (as prime minister) worked tirelessly to end the Indian blockade through clever diplomacy, even while we were uncompromising on national interest. We did a lot to end the long stalemate with India. Our stand back then was thus purely nationalist.

My current stand on bringing moderate Madhesi forces into mainstream by isolating them from extremist forces will also someday prove to be a strong nationalist stand. I am confident about that. This is my challenge to those who say the current amendment bill is rastraghati (anti-national). Which clause of the bill is anti-national? If the amendment can bring moderate Madhesi forces into mainstream and isolate secessionist forces in Madhes, why not endorse it? The reason there has been so many questions and doubts about the bill is that, like I said before, people only saw it through the prism of the blockade.

Like I said, our stand on amendment has always been clear. But our clear stand was overshadowed because of a planned and coordinated hate campaign to weaken our party, a party that is committed to protection of national unity and Hindutva.

The amendment process was actually the outcome of the initiatives I took as a Deputy Prime Minister and Foreign Minister in Oli government. This is continuation of what we did in those days. Oli government had decided to resolve contentious constitutional issues, including provincial demarcation, through a high-level political committee, which I headed. The idea was to resolve the amendment issue within three months based on my committee’s recommendation. But our government was soon toppled. So it is wrong to accuse us of shifting position on amendment.

If so why didn’t you clearly tell the people that you would vote in favor of the bill?

Let there be no confusion. We had a moral commitment to constitution amendment bill, and we still do. If we have to, we will still vote in its favor. We have been projected as bargaining for ministerial berths so that we can go into government and support the amendment bill. For RPP, constitution amendment and power sharing are two completely different things. Let me remind you, we withdrew support from Pushpa Kamal Dahal government over its controversial decision to impeach Chief Justice Sushila Karki. No other party could do that. So we are not supporting amendment bill just to get some ministerial berths. Even when we withdrew our support from Dahal government over impeachment issue, we had said that we would still vote in the bill’s favor.
Today, whether we will join this government is a secondary issue. We will join it only if we are recognized as a reliable and equal coalition partners. We will not join if all that Congress and Maoist Center expect of us is to rubberstamp their decisions. But even if we aren’t in the government, our stand on constitution amendment won’t change. We are always in favor of bringing Madhesi forces into mainstream politics.

Earlier you said amendment bill is not against national interest. Can you elaborate on that?

Frankly, those who say the bill is against national interest do not seem to have read it. So before you come to debate read the content of the bill carefully.

What will be your electoral strategy for the third phase of local elections now slated for September 18?

When we go to Province 2, we will go with three agendas: Hindutva, rights of Madhesi people and development.

Doesn’t your agenda of Hinduism seem a little out of place in local elections?

We want to restore the Hindu identity of Nepal. Hinduism was Nepal’s core national identity. The core character of our society and the country is also Hindu. We are guided by Hindu values, norms and principles. Like it or not, the country stands on the foundation of sanatan Hindu values. But these values have come under coordinated attack in recent times. We want to revive and reestablish those values on which our conduct and behavior are based. Think of it: What is the basis on which our state and society stand? Are they not the same sanatan Hindu values that have bound us for hundreds of years? Didn’t our Hindu faith connect families with their communities and the communities with their state?

You were the foreign minister at the time of the blockade. In your view has there been a definite shift in India’s Nepal policy since the blockade?

I would say Nepal-India relations are more or less back on track. But the path to normalization of relationship between India and Nepal had been paved at the start of 2016 when we were in the government. I also believe that we first need to put our own house in order before we talk about improving our foreign relations. Our parties and leaders need to maintain decorum and respect diplomatic boundaries when dealing with foreigners. But this does not seem to be happening.

The disgruntled forces were themselves making it appear like constitution amendment was an India-backed agenda. When they go to a dinner or breakfast meeting in Indian embassy and only then raise amendment issue with vigor, why wouldn’t people doubt their motive? Why wouldn’t people be misled?

KATHMANDU, Feb 28: United Democratic Madhesi Front (UDMF) took a decision not to participate in any process of the local... Read More...

KATHMANDU, Jan 4: The Federal Alliance has vehemently stated that the constitution amendment proposal registered in the Legislature-Parliament could not... Read More...