Ukraine searches for its dead at Russian occupation burial site 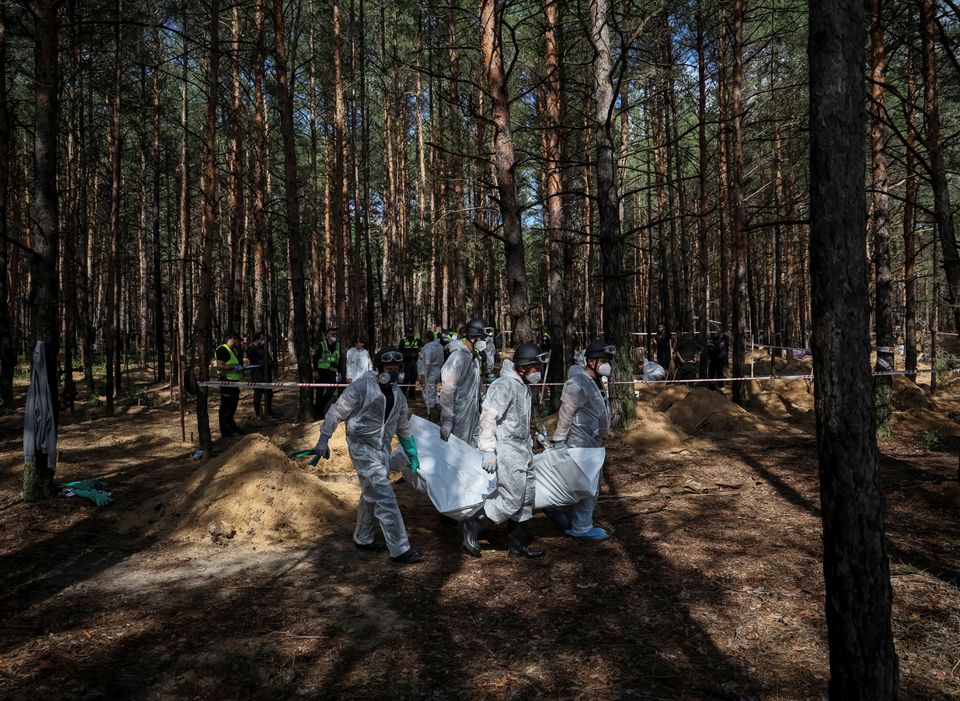 Ukraine says hundreds are buried at the site discovered this week, including at least 17 Ukrainian servicemen found in a mass grave on Friday and others who may be civilians buried in individual graves marked with flimsy wooden crosses.

The causes of death have not yet been established, although residents say some of the graves near the town of Izium were of people who died in an airstrike. Ukrainian authorities have said at least one of the bodies had tied hands and rope marks on the neck.

Moscow has not commented on the discovery of the graves. It regularly denies committing atrocities in the war or targeting civilians.

Reuters saw workers carefully exhume at least five graves with shovels, while police experts and investigators documented the findings on camera and inspected the bodies on the sandy soil between trunks of pine trees.

Investigators said the condition of the teeth showed some of the people were elderly.

"Exhumations are under way. Their identities are currently not known," said Roman Kasianenko, a regional prosecutor. He said three bodies dug up on Friday had been identified.

Clutching a neatly written list of names and numbers, resident Volodymyr Kolesnyk stepped between graves looking for relatives he said were killed in an airstrike on an apartment building shortly before the town fell in April, as the invaders swept through the northeastern region of Kharkiv.

Ukraine last week took back dozens of towns and villages in the area in a surprise counterattack.

Kharkiv regional governor Oleh Synehubov on Friday said he had been aware of mass deaths when shells hit a five-storey apartment block shortly before the Russian occupation. In May, a Ukrainian military official said more than 40 people died in an attack in the town.

Reuters could not immediately verify details of the attack, or who buried the bodies.

Kolesnyk said he knew his relatives had been taken to the burial site, and were in some of the graves marked with numbers, but that he had not dared visit while the town was under occupation.

He paused before a cross marked with the number 199 and after checking the list, carefully hung a small sign on it bearing the name of Yurii Yakovenko, his cousin.

The list was given to him by a local funeral company that dug the graves, he said.

"They buried the bodies in bags, without coffins, without anything. I was not allowed here at first. They (Russians) said it was mined and asked to wait. And there was a lot of them in the woods, so it was scary to come here," Kolensk told Reuters.

Ukrainian President Volodymyr Zelenskiy on Saturday said officials have found evidence of torture on exhumed bodies, adding that around 10 torture sites have been found across the territory liberated this month.

The head of the Russia-installed administration that abandoned the northeastern area around Izium last week accused Ukrainians of staging atrocities. "I have not heard anything about burials," Vitaly Ganchev told Rossiya-24 state television.

KYIV, Sept 16: Ukrainian authorities found a mass grave containing 440 bodies in the northeastern town of Izium that was... Read More...