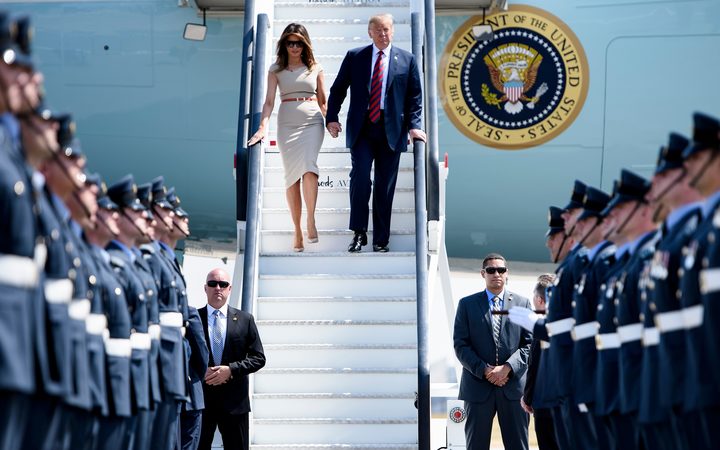 Donald Trump has said the UK will "probably not" get a trade deal with the US, if the UK prime minister's Brexit plan goes ahead.

He told The Sun that Theresa May's plan would "probably kill the deal" as it would mean the US "would be dealing with the European Union" instead of with the UK.

Downing Street has not yet reacted to Mr Trump's remarks.

Ms May has been making the case for a US free trade deal with Mr Trump, on his first UK visit as president.

She said Brexit was an "opportunity" to create growth in the UK and US.

In his interview, he renewed his criticism of London Mayor Sadiq Khan over last year's terror attacks in the capital, saying he had done "a terrible job".

The president and his wife were given a red carpet reception at Blenheim Palace, Oxfordshire on Thursday evening.

They were at a black tie dinner with Mrs May as news broke of his interview with the newspaper, which said it was conducted while he was in Brussels.

After it was published, Whitehouse spokeswoman Sarah Sanders said the president "likes and respects Prime Minister May very much", adding that he had "never said anything bad about her".

Mr Trump told The Sun newspaper that the UK's blueprint for its post-Brexit relations with the EU was "a much different deal than the people voted on".

He said the Brexit proposals Ms May and her cabinet thrashed out at Chequers last week mean it would be "most likely ... we would be dealing with the European Union instead of dealing with the UK, so it will probably kill the deal".

He also said he had told Ms May how to do a Brexit deal, but: "She didn't agree, she didn't listen to me."

The US president also said he was "cracking down" on the EU because "they have not treated the United States fairly on trading".