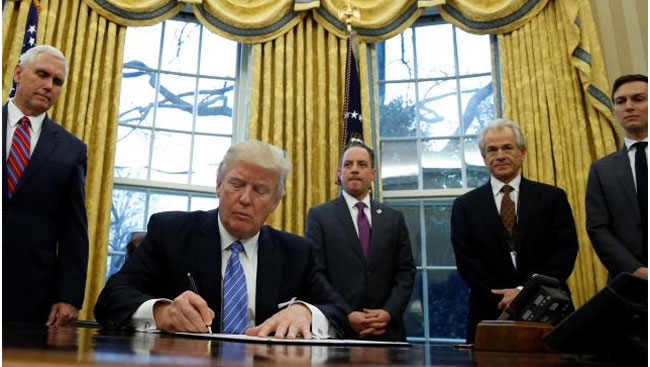 U.S. President Donald Trump formally withdrew the United States from the Trans-Pacific Partnership trade deal on Monday, distancing America from its Asian allies, as China's influence in the region rises.

Fulfilling a campaign pledge to end American involvement in the 2015 pact, Trump signed an executive order in the Oval Office pulling the United States out of the 12-nation TPP.

Trump, who wants to boost U.S. manufacturing, said he would seek one-on-one trade deals with countries that would allow the United States to quickly terminate them in 30 days "if somebody misbehaves."

"We're going to stop the ridiculous trade deals that have taken everybody out of our country and taken companies out of our country," the Republican president said as he met with union leaders in the White House's Roosevelt Room.

The TPP accord, backed heavily by U.S. business, was negotiated by former Democratic President Barack Obama's administration but never approved by Congress.

Obama had framed TPP, which excluded China, as an effort to write Asia's trade rules before Beijing could, establishing U.S. economic leadership in the region as part of his "pivot to Asia."

China has proposed a Free Trade Area of the Asia Pacific and has also championed the Southeast Asian-backed Regional Comprehensive Economic Partnership.

Trump has sparked worries in Japan and elsewhere in the Asia-Pacific with his opposition to the TPP and his campaign demands for U.S. allies to pay more for their security.

His trade stance mirrors a growing feeling among Americans that international trade deals have hurt the U.S. job market. Republicans have long held the view that free trade is a must, but that mood has been changing.

"It's going to be very difficult to fight that fight," said Lanhee Chen, a Hoover Institution fellow who was domestic policy adviser to 2012 Republican presidential nominee Mitt Romney. "Trump is reflecting a trend that has been apparent for many years."

Harry Kazianis, director of defense studies at the Center for the National Interest think tank in Washington, said Trump must now find an alternative way to reassure allies in Asia.

"This could include multiple bilateral trade agreements. Japan, Taiwan and Vietnam should be approached first as they are key to any new Asia strategy that President Trump will enact,” he said.

Trump is also working to renegotiate the North American Free Trade Agreement to provide more favorable terms to the United States, telling reporters he would meet leaders of NAFTA partners Mexico and Canada to get the process started.

The new president met with a dozen American manufacturers at the White House on Monday, pledging to slash regulations and cut corporate taxes - but warning them he would take action on trade deals he felt were unfair.

Trump, who took office on Friday, has promised to bring factories back to the United States - an issue he said helped him win the Nov. 8 election. He has not hesitated to call out by name companies he thinks should bring outsourced production back home.

He said those businesses that choose to move plants outside the country would pay a price. "We are going to be imposing a very major border tax on the product when it comes in," Trump said.

Liveris said the CEOs discussed the border tax "quite a bit" with Trump, explaining "the sorts of industry that might be helped or hurt by that."

"Look: I would take the president at his word here. He's not going to do anything to harm competitiveness," Liveris said. "He's going to actually make us all more competitive."

At part of the meeting observed by reporters, Trump provided no details on how the border tax would work.

The U.S. dollar fell to a seven-week low against a basket of other major world currencies on Monday, and global stock markets were shaky amid investor concerns about Trump's protectionist rhetoric.

"A company that wants to fire all of its people in the United States, and build some factory someplace else, and then thinks that that product is going to just flow across the border into the United States - that's not going to happen," he said.

The president told the CEOs he would like to cut corporate taxes to the 15 percent to 20 percent range, down from current statutory levels of 35 percent - a pledge that will require cooperation from the Republican-led U.S. Congress.

But he said business leaders have told him that reducing regulations is even more important.

Fields said he was encouraged by the tone of the meeting.

"I know I come out with a lot of confidence that the president is very, very serious on making sure that the United States economy is going to be strong and have policies - tax, regulatory or trade - to drive that," he said.

Trump told the executives that companies were welcome to negotiate with governors to move production between states.