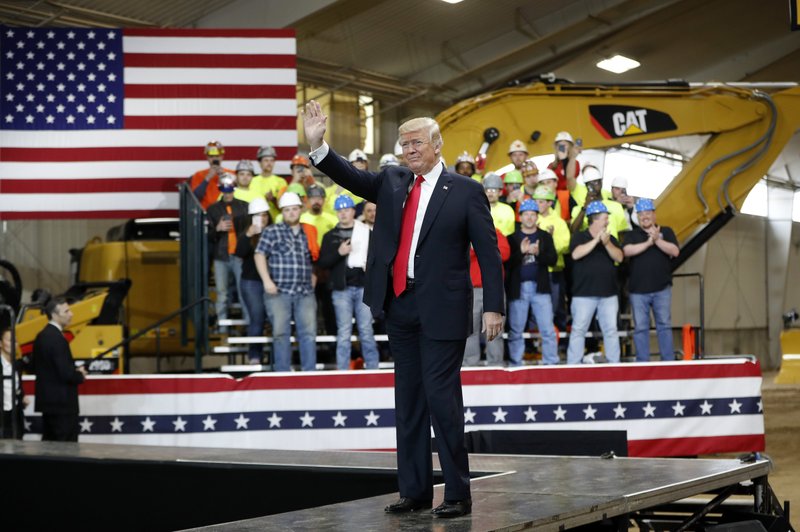 RICHFIELD, March 30: President Donald Trump on Thursday threatened to hold up the trade agreement his administration finalized this week with South Korea in an effort to gain more leverage in potential talks with North Korea.

Speaking on infrastructure in Ohio, Trump highlighted the recently completed renegotiation of the Korea-U.S. free trade agreement. But he warned, “I may hold it up until after a deal is made with North Korea.” The remark comes as the two Koreas have announced plans to hold bilateral meetings next month in advance of a possible meeting between Trump and North Korea’s Kim Jong Un by the end of May.

Trump noted the “rhetoric has calmed down” with North Korea, but added he may put a hold on the first trade agreement concluded by his administration, “because it’s a very strong card and I want to make sure everyone is treated fairly.”

Trump did not explain what leverage the U.S. would achieve by holding up the trade deal with South Korea. The South Korean embassy in Washington declined to comment.

The liberal government in Seoul wants Washington to engage with Pyongyang to help foster inter-Korean relations and reduce nuclear tensions. Trump may be suggesting that a prospective nuclear deal with North Korea is desired by South Korea, so by delaying it the U.S. could extract better trade terms with the South. But chances of a nuclear deal remain deeply uncertain.

Typically, the U.S. has sought solidarity with South Korea to resist attempts by North Korea to divide the allies. Resurrecting the complex and politically charged issue of trade could prove distracting just as the U.S. is pursuing high-stakes diplomacy with Pyongyang.

The president’s visit to Ohio was meant to be a push for upgrades to the nation’s aging roads and bridges. Instead, Trump turned what was billed as a “major speech” on infrastructure into 53-minute campaign-style rally, with talk of defeating the Islamic State and caring for veterans — not to mention a plug for the television reboot of “Roseanne.”

He highlighted his plan deploying $200 billion in federal money to spur at least $1.5 trillion in spending over a decade to repair or replace highways, bridges, ports, airports and other infrastructure.

“We will transform our roads and bridges from a source of endless frustration into a source of incredible pride,” he said.

But in a concession to political realities in Washington, where lawmakers are increasingly focused on their re-elections in what is set to be a difficult campaign cycle for Republicans, Trump said, “You’re probably going to have to wait until after the election.”

Trump said Democrats don’t want to work with him on infrastructure because they don’t want to give him any additional “wins” after his tax bill passed in December.

Trump unveiled the sweeping infrastructure proposal in February and cast it as one that could garner bipartisan support. But the plan relies heavily on state and local governments for the bulk of the spending, raising concerns among members of Congress about the possibility of higher commuter tolls and the sale of assets to raise the money.

There is little expectation that Congress will take up a sweeping infrastructure proposal along the lines of what Trump envisions — or that Republicans in control of the House and Senate will write their own legislation — as lawmakers begin to shift their focus to the challenge of getting re-elected in November.

Instead, Congress plans to package a series of related measures, including beefed-up spending in the big budget bill Trump signed into law last week. That bill, which funds the government through Sept. 30, included more money for transportation projects, rural broadband and other investments.

House Speaker Paul Ryan, R-Wis., promoted it in a tweet as “long-overdue updates to our country’s infrastructure.”

Donald Trump has said the UK will "probably not" get a trade deal with the US, if the UK prime... Read More...

China Warns US: No Trade Deal if Tariffs Go Ahead

BEIJING, June 3: China has warned that any agreements with Washington in their talks on settling a sprawling trade dispute “will... Read More...