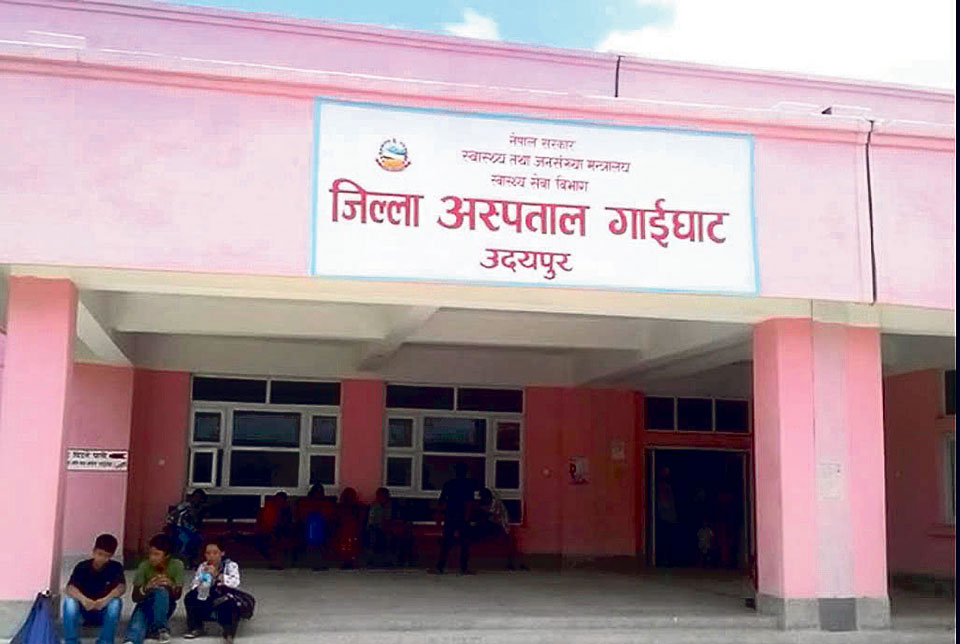 UDAYAPUR, Feb 3: The district hospital of Udayapur has been reeling under severe medicine crunch of late. The hospital lacks many of the life saving drugs for common ailments, including the government-provided free medicines for the needy.

According to Birkha Bahadur Khatri, chief of the hospital's administration department, they have run out of 90 percent of the free medicines. “The remaining 10 percent medicine stocks are not very useful. This has affected the treatment of the patients.”

As a result, the patients are forced to visit private hospitals and pharmacies, which charge them hefty fees. The elderly and those with poor financial backgrounds have been hit hard by the situation.

The hospital said that medicines for cough and cold, viral fever and antibiotics have run out of stock, adding that they have not been able to replenish the medicine stocks.

Udayapur District Hospital is a 50-bed hospital. However, the hospital has not been able to provide service up to its standard due to the lack of skilled manpower, the locals complain.

Around 100 patients visit the hospital seeking out-patient department (OPD) services. Likewise, the hospital receives around 10 people for emergency services on a daily basis. The number of patients has doubled since the past month due to excessive cold, according to hospital sources.

But the hospital is forced to send back the patients empty handed. Even those seeking treatment for common diseases are also forced to return without treatment due to severe shortage of medicines.

“Our capacity to provide service has been badly affected by the shortage of medicines,” said Acting Medical Superintendent Astha Subba. “We fully lack even oxygen cylinders and medicines needed for emergency patients such as those with respiratory illness and other severe diseases,” he added. Even worse, most of the remaining stocks of the medicines are date-expired.

After the local restructuring process under the newly adopted federal system, the lack of coordination between the district hospital, Udayapur's District Public Health Office and department of medicine has led to the current situation, said Subba.

“Doctors have raised the issues before the medicine crunch. However, the problem in supply resulted in the current situation,” he added.

If the stock of medicines is not immediately replenished, both the OPD and emergency services of the hospital could face closure, sources said.

Ilam, Feb 25: Students of the local schools in the southern rim of Ilam district have been reeling under drinking... Read More...

ILAM, Feb 18: In the hope of getting better health services than in their villages, dozens of people from the remote... Read More...