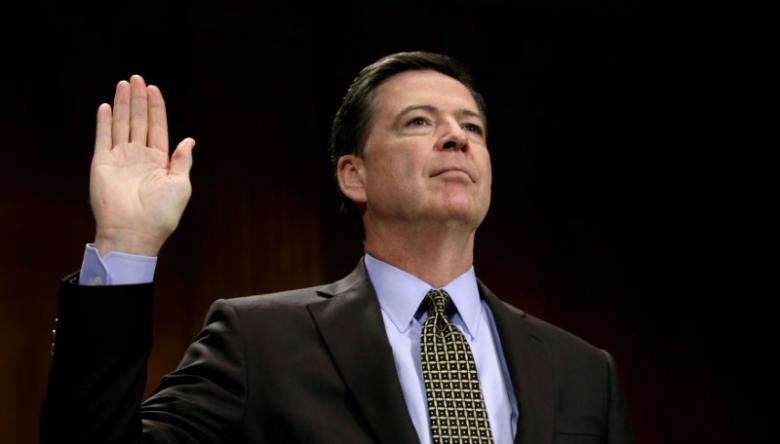 FILE PHOTO - FBI Director James Comey is sworn in to testify before a Senate Judiciary Committee hearing on 'Oversight of the Federal Bureau of Investigation' on Capitol Hill in Washington, U.S., May 3, 2017. REUTERS/Kevin Lamarque/File Photo 1/5leftright 2/5leftright 3/5leftright 4/5leftright 5/5leftright 1/5

WASHINGTON, May 10: U.S. President Donald Trump ignited a political firestorm on Tuesday by firing FBI Director James Comey, who had been leading an investigation into the Trump 2016 presidential campaign's possible collusion with Russia to influence the election outcome.

The move stunned Washington and raised concerns among Democrats and others that the White House was trying to blunt the FBI probe involving Russia.

Some Democrats compared Trump's move to the "Saturday Night Massacre" of 1973, in which President Richard Nixon fired an independent special prosecutor investigating the Watergate scandal.

White House officials denied allegations that there was any political motive in the move by Trump, who took office on Jan. 20.

But Senate Democratic leader Chuck Schumer said he spoke to Trump and told him he was "making a very big mistake" in firing Comey, adding the president did not "really answer" in response.

An independent investigation into Moscow's role in the election "is now the only way to go to restore the American people’s faith," Schumer said.

Senator Richard Burr, the Republican chairman of the Senate Intelligence Committee, which is overseeing its own investigation into Russian interference during the election, said in a statement he was troubled by the timing of Comey's termination.

"His dismissal, I believe, is a loss for the Bureau and the nation," Burr said.

U.S. intelligence agencies concluded in a January report that Russian President Vladimir Putin had ordered an effort to disrupt the 2016 election, with the aim of helping Trump.

Russia has repeatedly denied any meddling in the election and the Trump administration denies allegations of collusion with Russia.

Trump, in a letter to Comey released by the White House, said: "It is essential that we find new leadership for the FBI that restores public trust and confidence in its vital law enforcement mission."

The president told Comey in the letter that he accepted the recommendation of Attorney General Jeff Sessions that he could no longer provide effective leadership. Comey's term was to run through September 2023. He was appointed director by Democratic President Barack Obama in 2013.

Sessions advised Trump's campaign before being picked by the president to lead the Justice Department. Sessions had recused himself from involvement in the Russia investigation, after he misstated his own 2016 contacts with Russia's ambassador to Washington.

Pushing back against critics of the move, White House officials said Deputy Attorney General Rod Rosenstein, a career prosecutor who took office on April 25, assessed the situation at the FBI and concluded that Comey had lost his confidence.

The White House released a memo in which Rosenstein wrote: "I cannot defend the Director's handling of the conclusion of the investigation of Secretary Clinton's emails, and I do not understand his refusal to accept the nearly universal judgment that he was mistaken."

Trump, in his letter to Comey, said: "While I greatly appreciate you informing me, on three separate occasions, that I am not under investigation, I nevertheless concur with the judgment of the Department of Justice that you are not able to effectively lead the bureau."

Comey, 56, had been the target of criticism from many quarters for his handling of a probe involving Clinton's use of a private email server while she was U.S. secretary of state under Obama. As recently as Tuesday, the FBI clarified remarks that Comey made on the matter last week.

Trump had originally criticized the FBI director for not pursuing criminal charges against Clinton last July, but later lavished praise on him.

Comey had said in July the Clinton email case should be closed without prosecution, but then declared - 11 days before the Nov. 8 election - that he had reopened the investigation because of a discovery of a new trove of Clinton-related emails.

Clinton and other Democrats say they believe Comey's decision help cost her the election.

"Trump praised him for the work on the email investigation, so that’s not it," said Austin Berglas, a former FBI supervisory agent on hacking cases. "I think he realized the extent of the Russia investigation under way and moved him out. To me, that’s the only logical explanation right now."

"The reason they’re giving for firing Comey doesn’t add up," said a senior U.S. official who has served in both Democratic and Republican administrations for more than 20 years.

"There has to be another reason, and I can think of only two possibilities. One is that despite the facts, the president considers Comey a political animal, and not a friendly species. The second is that he’s afraid of a real investigation into his Russia business," said the official, speaking on condition of anonymity.

On Monday, former acting Attorney General Sally Yates told a Senate panel that she had informed the White House on Jan. 26 that Trump's then-national security adviser, Michael Flynn, was at risk of blackmail by Moscow because he had been untruthful about his discussions with the Russian ambassador, Sergei Kislyak.

Yates, a holdover from the Obama administration, was later fired by Trump after she declined to defend his travel ban on seven Muslim-majority countries, a policy that Trump said would help protect Americans from Islamist militants.

Kim fires off insults at Trump and hints at weapons test

NC-proposed candidate must be made new President: Sharma
19 minutes ago

Why was the University Bill introduced, leaving aside the Education Bill?
39 minutes ago