Trump cancelling Poland trip is a blow for ruling populists 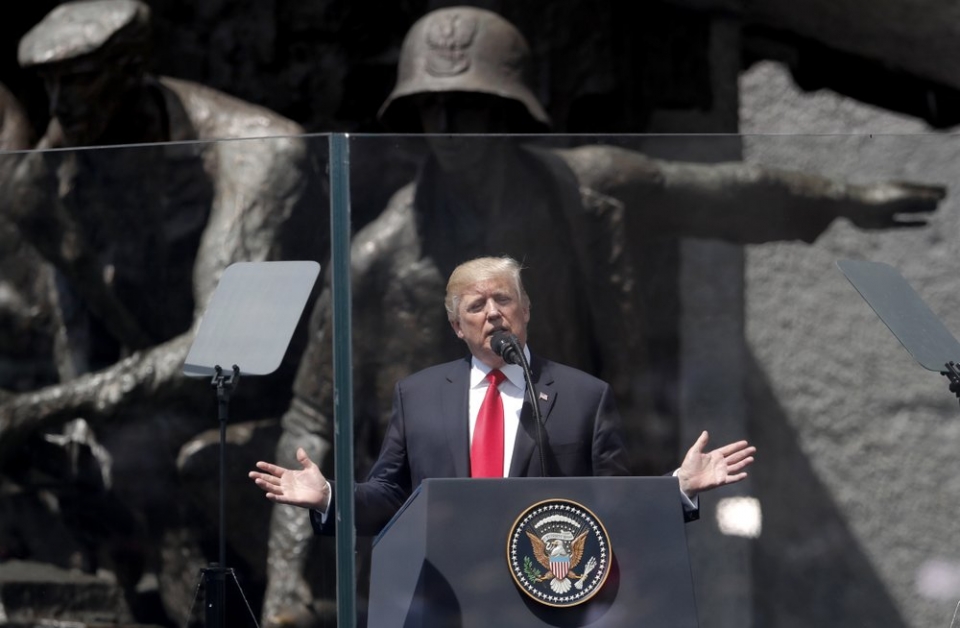 FILE - In this file photo dated Thursday, July 6, 2017, U.S. President Donald Trump delivers a speech before the Warsaw Uprising Monument in Warsaw, Poland. Dozens of former Polish ambassadors are telling Trump that Poland's democracy is at risk, in an open letter published Tuesday Aug. 27, 2019, ahead of the U.S. President's visit to attend ceremonies upcoming Saturday in Warsaw marking the 80th anniversary of the start of World War II. (AP Photo/Petr David Josek, FILE)

WARSAW, POLAND, Aug 30: President Donald Trump’s decision to cancel a planned trip to Poland to deal with a hurricane comes as a sharp blow to Poland’s populist government, which had been counting on the visit for a boost ahead of October elections.

Trump is instead sending Vice President Mike Pence to observances Sunday marking the start of World War II and for meetings with Polish leaders Monday expected to include new military and energy deals. Trump announced late Thursday that it was “very important” to stay home to deal with Hurricane Dorian, which is predicted to make landfall in Florida on Monday.

A top aide to Polish President Andrzej Duda, Krzysztof Szczerski, said Trump expressed that he was sorry about the cancellation in a phone call with Duda and promised that the trip would be rescheduled when possible.

“It’s very understandable and obvious that the president, who is also responsible for emergency situations in the United States, should be there and wants to be there,” Szczerski said in comments Friday to the TVN broadcaster.

Meanwhile, government-friendly media were casting the best light on the situation, stressing the severity of the hurricane and that Florida will be a crucial battleground state for Trump in 2020.

“Donald Trump cannot afford the mistake of George W. Bush during Hurricane Katrina,” said wPolityce.pl a pro-government news portal, a reference to criticism of Bush’s reaction during that natural calamity of 2005.

Some political opponents, however, voiced satisfaction that the ruling party lost the potential electoral boost only six weeks ahead of Oct. 13 parliamentary elections.

Some also called it a reminder to the government not to rely too heavily on the United States at the expense of other international alliances, as some believe the ruling Law and Justice party has been doing with nationalist policies that have created tensions with European partners.

Adrian Zandberg, a left-wing party leader vying in the upcoming elections, said it’s a reminder that “other matters, interests will always be more important” to the United States.

“Therefore, basing Poland’s security on a mirage of ‘friendship’ with Trump is unreasonable,” Zandberg said on Twitter.

Some critics, who accuse the government of drifting in an illiberal direction, voiced satisfaction that the ruling party was losing the likely image boost it was counting on.

The populist Law and Justice party is already far ahead in the polls, riding the wave of a booming economy and popular social spending policies. Still, it will be fighting to hold on to the parliamentary majority that it now holds.

The change of plans also deprives Trump of a chance to bask in an enthusiastic welcome abroad. On his first visit, in 2017, he was met by flag-waving crowds chanting his name — a sharp contrast to protests and “Trump Baby” balloons that have greeted him in London and elsewhere.

It’s the second time Trump has canceled a trip in recent weeks. The president had originally been scheduled to fly from Poland to Copenhagen for his first official trip to Denmark, but canceled after leaders there mocked his desire to purchase Greenland.

For Poland’s government, which has been in conflict with the European Union over a controversial overhaul of its justice system, Trump’s presence was a chance to highlight the nation’s successes and bask in the global limelight.

Although Pence will be welcomed respectfully, a vice president simply doesn’t carry the same weight or garner the same level of attention.

On this government’s watch, Poland has officially transitioned to a “developed market,” and the prime minister — a former banker — pledged this week that it would have a deficit-free budget next year for the first time in the 30 years since communism collapsed.

The Law and Justice government has also dramatically reduced Polish dependence on Russian gas — an energy source increasingly provided by U.S. companies shipping it across sea — and has cultivated a stronger military relationship with Washington.

Above all, Prime Minister Mateusz Morawiecki, President Duda and ruling party leader Jaroslaw Kaczynski — the real power behind the government — had a chance to show voters that the party’s populist policies have not left it internationally isolated, as the opposition claims.

Still, more than 40 other world leaders are still due to attend commemorations marking the start of the war, which killed more than 70 million people over six years.

And the delegation now led by Pence will include other high-ranking U.S. officials and is expected to result in some concrete steps deepening energy and military ties.

One expectation is a refinement of a plan announced in June to increase the current level of U.S. troops in Poland from 4,500 to 5,500, a plan that Russia has vowed to meet with retaliation.

Perhaps the biggest symbolic reward of all would involve the U.S. giving a concrete timeline to finally lifting visa requirements for Poles traveling to the U.S.

The bureaucratic hassle, cost and risk of rejection in the visa application process has long made Poles feel like second-class allies compared to Western Europeans. And it has stung all the more given Polish military support for U.S.-led missions in Afghanistan and Iraq.

Michal Baranowski, director of the Warsaw office of the German Marshall Fund think tank, says there is no issue of greater relevance to regular Polish people.

“It’s been a thorn in Polish-American relations for several decades now, and if it happens it will be a big deal, and I am convinced it will,” Baranowski said.

Republican Donald Trump stunned the world on Tuesday by defeating heavily favored Hillary Clinton in the race for the White... Read More...

From start, Clinton, Trump set out to destroy one another

WASHINGTON, Oct 10:  It started the minute they walked on stage and skipped the pretense of a cordial handshake. ... Read More...

Four-day walk from KTM to Sindhuli: Laborers have to travel long
15 hours ago

INFOGRAPHICS: Nepalis affected by COVID-19 throughout the world
44 minutes ago

COVID-19 tests being conducted from 10 different places: MoHP
53 minutes ago

Nationwide lockdown likely to be extended by another week, until midnight April 14
6 hours ago