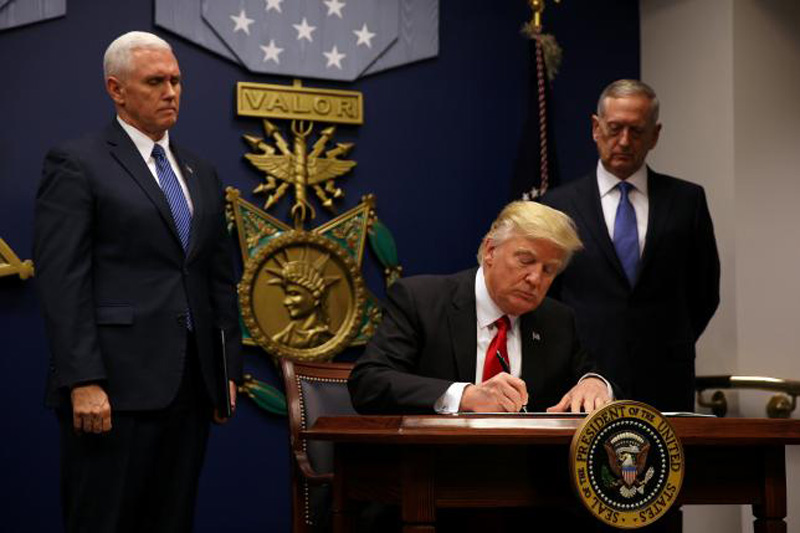 President Donald Trump on Friday put a four-month hold on allowing refugees into the United States and temporarily barred travelers from Syria and six other Muslim-majority countries, saying the moves would help protect Americans from terrorist attacks.

In the most sweeping use of his presidential powers since taking office a week ago, Trump paused the entry of travelers from Syria and the six other nations for at least 90 days, saying his administration needed time to develop more stringent screening processes for refugees, immigrants and visitors.

"I'm establishing new vetting measures to keep radical Islamic terrorists out of the United States of America. Don't want them here," Trump said earlier on Friday at the Pentagon.

"We only want to admit those into our country who will support our country and love deeply our people," he said.

The order seeks to prioritize refugees fleeing religious persecution, a move Trump separately said was aimed at helping Christians in Syria. That led some legal experts to question whether the order was constitutional.

One group said it would announce a court challenge on Monday. The Council on American-Islamic Relations said the order targets Muslims because of their faith, contravening the U.S. Constitutional right to freedom of religion.

"President Trump has cloaked what is a discriminatory ban against nationals of Muslim countries under the banner of national security," said Greg Chen of the American Immigration Lawyers Association.

Trump has long pledged to take this kind of action, making it a prominent feature of his campaign for the Nov. 8 election, but people who work with Muslim immigrants and refugees were scrambling on Friday night to determine the scope of the order.

Even legal permanent residents - people with "green cards" allowing them to live and work in the United States - were being advised to consult immigration lawyers before traveling outside the country, or trying to return, said Muslim Advocates, a civil rights group in Washington.

On Friday evening, Abed Ayoub of the American-Arab Anti-Discrimination Committee said he had fielded about 100 queries from people anxious about the order, which he said he believed could affect traveling green card holders, students, people coming to the United States for medical care and others.

During his campaign, Trump tapped into American fears about Islamic State militants and the flood of migrants into Europe from Syria's civil war, saying refugees could be a "Trojan horse" that allowed attackers to enter the United States.

In December 2015, he called for a ban on all Muslims entering the United States, drawing fire for suggesting a religious test for immigrants that critics said would violate the U.S. Constitution.

His idea later evolved into a proposal for "extreme vetting."

Trump said in an interview with the Christian Broadcasting Network that the exception would help Syrian Christians fleeing the civil war there.

Legal experts were divided on whether this order would be constitutional.

"If they are thinking about an exception for Christians, in almost any other legal context discriminating in favor of one religion and against another religion could violate the constitution," said Stephen Legomsky, a former chief counsel at U.S. Citizenship and Immigration Services in the Obama administration.

But Peter Spiro, a professor at Temple University Beasley School of Law, said Trump's action would likely be constitutional because the president and Congress are allowed considerable deference when it comes to asylum decisions.

"It's a completely plausible prioritization, to the extent this group is actually being persecuted," Spiro said.

Trump's order had been expected to include a directive about setting up "safe zones" for Syrian refugees inside the country, but no such language was included on Friday.

The order may also affect special refugee programs for Iraqis who worked for the U.S. government as translators after the 2003 invasion of Iraq.

It is already affecting refugees and their families, said Jen Smyers of the Church World Service, a Protestant faith-based group that works with migrants.

Smyers said she spoke to an Iraqi mother whose twin daughters remain in Iraq due to processing delays. "Those two 18-year-old daughters won't be able to join their mother in the U.S.," she said.

Democrats on Friday were quick to condemn Trump's order as un-American, saying it would tarnish the reputation of the United States as a land that welcomes immigrants.

Some Republicans praised the move. Representative Bob Goodlatte, chairman of the House of Representatives Judiciary Committee, said Islamic State has threatened to use the U.S. immigration system, making it important to do more screening.

"I am pleased that President Trump is using the tools granted to him by Congress and the power granted by the Constitution to help keep America safe and ensure we know who is entering the United States," Goodlatte said in a statement.

"We are a compassionate nation, and I support the refugee resettlement program, but it's time to reevaluate and strengthen the visa vetting process," Ryan said.

"President Trump is right to make sure we are doing everything possible to know exactly who is entering our country," Ryan said.