Trump accuses Obama of tapping his phones, cites no evidence 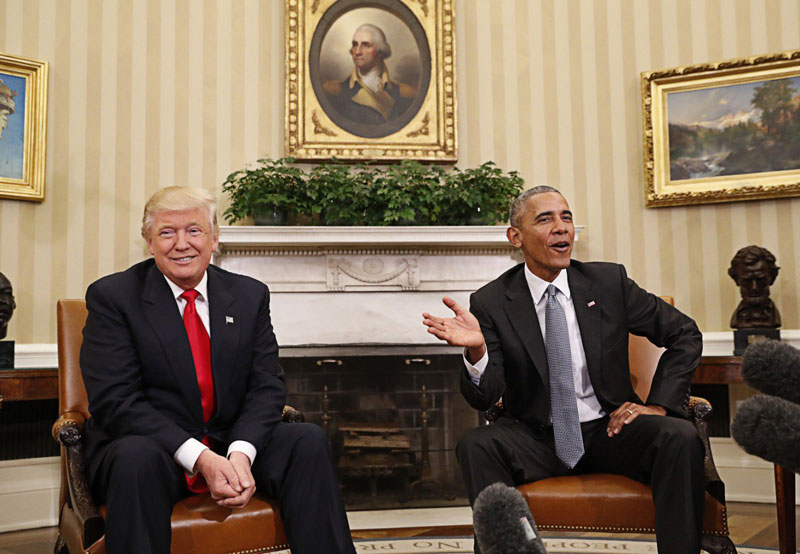 In a series of angry morning tweets, Trump suggested his predecessor was behind a politicallymotivated plot to upend his campaign. He compared the alleged events to "Nixon/Watergate" and "McCarthyism!" He called Obama a "Bad (or sick) guy."

Trump's claims drew bipartisan rebukes from Democrats and Republicans alike who find his habit of venting on social media to be beneath the office of the president. After delivering a well-received speech to Congress earlier this week, the tweets reflected the president's growing frustration with the swirling allegations about his advisers' ties to Russia, which are under FBI investigation, and his team's inability to overcome them. Trump lashed out at his senior team during an Oval Office meeting Friday, according to one White House official.

The White House did not respond to questions about what prompted the president's accusations that Obama had tapped his phones. Presidents cannot legally order wiretaps against U.S. citizens.

Trump said Saturday morning he had "just found out" the information, though it was unclear whether he was referring to a briefing, a conversation or a media report. The president has in the past tweeted about unsubstantiated and provocative reports he reads on blogs or conservative websites.

Still, the morning tweets stand out, even for the perpetually piqued Trump, given the gravity of the charge and the strikingly personal attack on the former president. Trump spoke as recently as last month about how much he likes Obama and how much they get along, despite their differences.

"How low has President Obama gone to tapp my phones during the very sacred election process. This is Nixon/Watergate. Bad (or sick) guy!" he tweeted, misspelling 'tap.'

Obama spokesman Kevin Lewis said a "cardinal rule" of the Obama administration was that no White House official ever interfered in Justice Department investigations, which are supposed to be conducted free of political influence.

"As part of that practice, neither President Obama nor any White House official ever ordered surveillance on any U.S. citizen," Lewis said, adding that "any suggestion otherwise is simply false."

Rep. Adam Schiff of California, the senior Democrat on the House Intelligence Committee, said in a statement that Trump was making "the most outlandish and destructive claims without providing a scintilla of evidence to support them."

Sen. Ben Sasse, R-Neb., called on Trump to explain what he knows about the wiretapping allegations "ideally to the full public, and at a bare minimum to the U.S. Senate."

Trump has been trailed for months by questions about his campaign's ties to Russia. The questions have been compounded by U.S. intelligence agencies' assessment that Russia interfered with the election to help Trump triumph over Hillary Clinton, along with disclosures about his aides' contacts with a Russian official.

On Thursday, Sessions recused himself from the FBI probe after acknowledging he did not disclose his campaign-season contacts with Russia's ambassador to the United States when asked during his confirmation proceedings. Sessions, a U.S. senator at the time, was Trump's earliest Senate supporter.

The Sessions revelations deepened the president's anger over what he sees as his team's inability to get ahead of the Russia allegations. In the Oval Office meeting Friday shortly before departing for Florida, he angrily told senior advisers that what had the potential to be a good week following his address to Congress had been overtaken by the Russia controversy, according to a White House official who insisted on anonymity in order to discuss the private meeting.

Chief of staff Reince Priebus, who was scheduled to depart with Trump, was told to stay in Washington, the White House official said. Chief strategist Steve Bannon also stayed behind, though he eventually traveled to Florida on Saturday with Sessions.

In his morning tweets, Trump said the wiretapping occurred in October at Trump Tower, the New York skyscraper where he ran his campaign and transition. He also maintains a residence there.

The president's allegations may be related to anonymously sourced reports in British media and blogs, and on conservative-leaning U.S. websites, including Breitbart News. Those reports claimed that U.S. officials had obtained a warrant under the Foreign Intelligence Surveillance Act to review contacts between computers at a Russian bank and Trump's New York headquarters.

The Associated Press has not confirmed these contacts or the investigation into them. Bannon is a former executive chairman of Breitbart News.

FISA is a 1978 law that created a system to hear requests to surveil foreign intelligence agents. It differs from a regular criminal warrant because it does not require the government to provide probable cause that a crime has occurred. Instead, under FISA, the government must simply provide evidence that the target of an investigation is an agent of a foreign power.

Such targetable agents would include Russian diplomats such as Sergei Kislyak, the ambassador who spoke with a number of Trump aides. But a FISA warrant could also include others for whom investigators could muster probable cause, potentially including entities directly connected to Trump.

Obama could not order a FISA warrant. Obtaining one would require officials at the Justice Department to seek permission from the FISA court, which is shrouded in secrecy. Judges could order prosecutors to share FISA information with defendants if they deem it necessary for challenging a search's legality, but courts have consistently agreed with the government that disclosing the material could expose sensitive intelligence secrets.

One exception to this practice is the president himself, who has the authority to declassify records. In Trump's case, he could confirm any such surveillance of his campaign or business undertaken before he took office in January.

US President-elect Donald Trump is likely to pick Exxon Mobil Corp CEO Rex Tillerson as his Secretary of State, according... Read More...