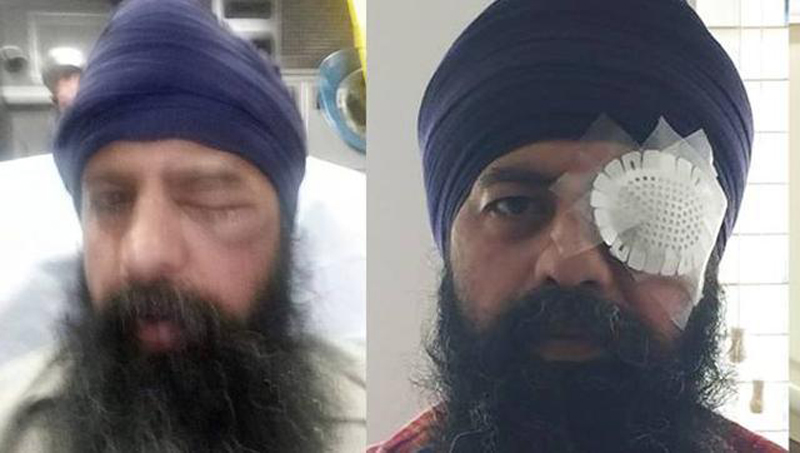 CALIFORNIA, Oct 9: Maan Singh Khalsa was stopped at a red light in Richmond, Calif., when, authorities say, a group of white men in a pickup truck began to attack him, completely unprovoked.

One of the men threw a beer can at Khalsa’s car while cursing and yelling at him. At the next red light, Khalsa’s head was pulled out of the window of his car, his turban was forcibly removed and his long hair was cut off, authorities say.

The Sikh Coalition, a national civil rights organisation, is urging California law enforcement officials to file hate crime charges in connection with the September attack that left Khalsa with several injuries. The group argues that Khalsa, an information technology specialist and part-time caregiver, was targeted because of his ethnicity and religion.

Khalsa, who is of South Asian descent, wears a turban and keeps his hair long for religious purposes.

“The attackers caused physical injuries and deep harm when they targeted my Sikh faith,” Khalsa said in a statement. “I urge a thorough investigation so we can address the tide of violence and bigotry in this country.”

The organisation wrote a letter on Friday to Richmond Police Chief Allwyn Brown and Contra Costa County District Attorney Mark A. Peterson, urging them to investigate the incident as a hate crime.

The attack happened about 9 p.m. on Sept. 25 when Khalsa was driving home from work. A white Ford F-150 truck, with about five to six men, who yelled at cursed at Khalsa, pulled up next to him at an intersection in Richmond, about 20 miles outside of San Francisco.

Khalsa rolled down his window to question the man who threw the beer can at him, according to the letter. As one of them got out of the truck and walked toward Khalsa’s car, the light turned green and the 41-year-old Sikh man drove away.

Khalsa, “frightened and fearful for his safety,” called 911 and told the operator that a group of men was trying to attack him, the letter says.

At the next stoplight, three men got out of the truck and attacked Khalsa through his open window. They punched his face repeatedly and removed his turban, according to the letter. One of the men grabbed a handful of Khalsa’s hair and cut it off with a knife.

“Cut his f—— hair,” one of the alleged attackers shouted, according to the Sikh Coalition.

Khalsa, who remained on the phone with the 911 operator during the attack, drove away after the light turned green and waited for police at a nearby gas station. The attack left Khalsa with a swollen black eye, a dental damage that will cost more than $2,000 and an infected finger that could be amputated.

Two of the three men who got out of the truck — Chase Little, 31, of Beaumont, Tex., and Dustin Albarado, 25, of Ponchatoula, La. — were arrested shortly after on suspicion of felony assault, but have been released on bail, according to the East Bay Times.

The driver of the truck drove away during the attack, leaving Little and Albarado behind, the paper reported. It’s unclear whether the two men have attorneys. No other arrests have been made.

Simon O’Connell, a Contra Costa county prosecutor, told the East Bay Times that he is reviewing the incident and is considering hate-crime charges. In California, injuring, intimidating and threatening people because of their nationality, ethnicity or religion is considered a hate crime, a felony punishable by up to three years in person. An additional four years could be added if the crime was committed with another person.

The attack left Khalsa with not only physical injuries but also “deep humiliation,” according to the letter from the Sikh Coalition.

“Targeting a Sikh’s turban and hair is analogous to targeting a Jew’s yarmulke or a Muslim’s hijab,” the letter states.

Keeping his hair long and wrapping it in a turban is required of Khalsa as a man of Sikh faith. Sikhs believe that keeping their hair in its natural state is a symbol of respect for God, and wearing a turban signifies preserving their identity as Sikhs.

“When a Sikh ties a turban, the turban ceases to be just a piece of cloth and becomes one and the same with the Sikh’s head. It is a religious commitment without which the believer ceases to be Sikh,” according to the Sikh Coalition.

Forcibly removing a Sikh man’s turban or cutting his hair “is perceived as the most humiliating and hurtful physical injury that can be inflicted upon a Sikh,” the organisation said in the letter, which was written by Khalsa’s attorneys.

About 700,000 Sikhs live in the United States. Richmond, where Khalsa, a U.S. citizen, lives, is home to a large Sikh population.

Sikh Americans have been victims of hundreds of hate crimes, and racial and religious profiling over the past 15 years since the 9/11 attacks.

According to a 2013 survey by Stanford University and the Sikh American Legal Defense and Education Fund, 49 percent of Americans believe that Sikhism is a sect of Islam, even though it’s a separate religion. Some Americans also tend to associate turbans and Sikhs with Osama bin Laden, al-Qaeda, the Islamic State or the Taliban. The survey found that 20 percent of respondents are likely to become angry or apprehensive if they encounter a stranger wearing a turban.

Sikhism, which originated in India, is the fifth largest religion in the world and is independent of Islam.

Still, Sikh Americans have been disproportionately targeted because of their religion or what people perceived it to be.

According to a 2010 survey by the Sikh Coalition, 1 in 10 Sikhs in the Bay Area reported being victims of hate crimes, 68 percent of which were physical attacks. Many of the attacks have been violent and fatal.

In 2011, for instance, two elderly Sikh men were out for a walk when they were gunned down in Elk Grove, Calif. No arrests have been made in connection with the men’s deaths.

In 2012, a white supremacist stormed into a Sikh worship centre in Oak Creek, Wis., and fatally shot six Sikh Americans.

Khalsa, the father of an 8-year-old girl, has lived in Contra Costa County for almost seven years. He works full time as an IT specialist for the Social Security Administration and part-time as a caregiver for the elderly. His attorneys did not immediately return calls from The Washington Post on Saturday.

Man, his wife and son injured after being attacked by brother

BHIMDATTANAGAR (Kanchanpur), June 22: A man attacked his brother and his brother's wife and son with an axe, leaving them... Read More...