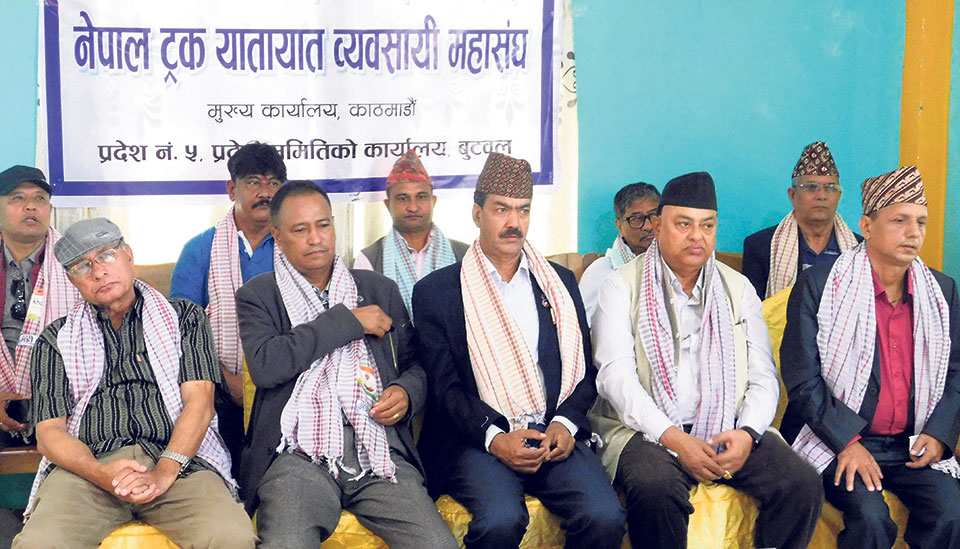 BUTWAL, Nov 4: Truck entrepreneurs of Province 5 have made it clear that they won't allow the government to add value-added tax (VAT) on freight transport cost.

A meeting of Federation of Truck Transport Entrepreneurs (FTTEN), Province 5, held in Rupandehi on Sunday took the decision.

Speaking at the meeting, Rajendra Kumar Shrestha, central president of FTTEN, said that the government was forcefully imposing VAT on freight transport cost which could push the sector toward crisis. He also warned of strike if the government imposed the VAT forcefully.

Stating that freight transport fare fixed in 2014 has not been revised yet, he demanded that the government review the fare at the earliest. "Truckers are not getting desired benefits due to delay in implementation of working procedure for operation of weighbridges to discourage overloading of trucks," he said, adding that condition of roads was worsening due to overloaded vehicles.

Shrestha also said that the government cannot stop renewal of transport entrepreneurs' associations and block their bank accounts if entrepreneurs are united.

Similarly, former general secretary of FTTEN Arjun Ranabhat said policies, rules and regulations of the government should encourage private sector rather than discourage them. Likewise, Founder President of FTTEN, Madhav Adhikari, said that the government should put in place effective mechanism to prevent movement of overloaded Indian cargo trucks

Federation of Truck Transport Entrepreneurs (FTTEN) has demanded that the government monitor weight of Indian trucks which are often overloaded. FTTEN officials argue that Indian trucks are not only worsening road conditions, but also displacing jobs in transportation sector.