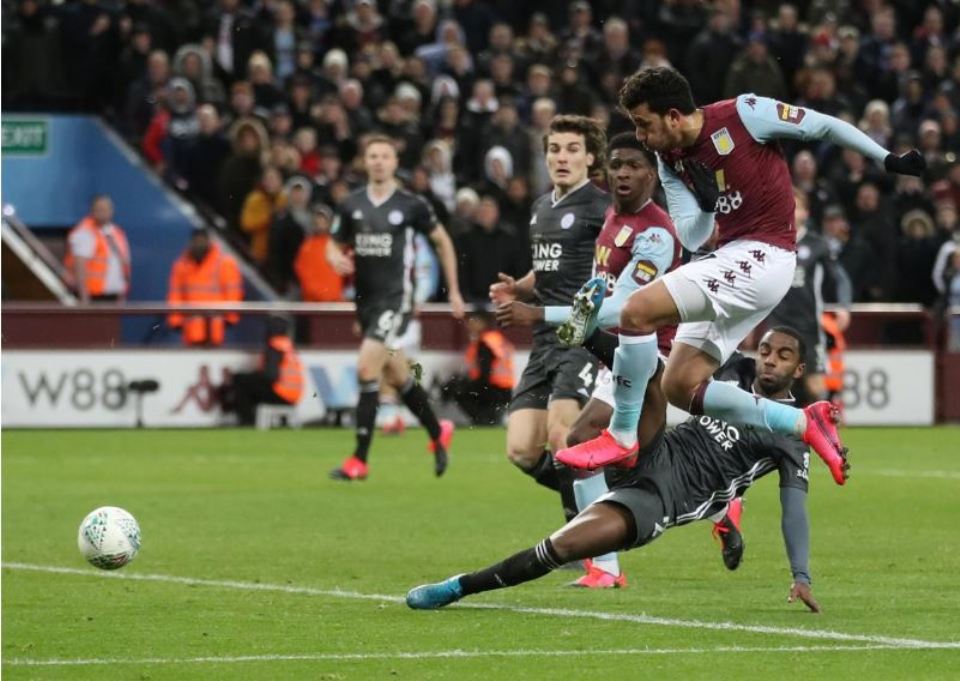 BIRMINGHAM, England, Jan 29: Aston Villa’s Trezeguet struck a dramatic 93rd-minute winner to send them into the League Cup final with a 2-1 victory over Leicester City that gave them a 3-2 aggregate win on Tuesday.

Matt Targett fired the hosts ahead in the semi-final second leg at Villa Park after being teed up by Jack Grealish, with Leicester’s Youri Tielemans hitting the crossbar at the other end.

Kelechi Iheanacho equalised from close range in the 72nd minute as he did in the first leg, but Trezeguet finished perfectly in stoppage time at the back post to win it for Dean Smith’s side.

Villa, five-times winners who are back in the final for the first time since 2010, will face either Manchester City or Manchester United, who meet in their second-leg clash on Wednesday, with City leading 3-1 on aggregate.

“It shows what character we’ve got in the team,” Villa captain Grealish told Sky Sports.

“We were in a sticky patch before Christmas, we couldn’t string four passes together, never mind winning, but we have started the new year in great form.”

Villa have struggled in the Premier League and sit 16th in the table, two points above the relegation zone, but fought well against their third-placed opponents in both legs of the semi-final.

Villa hit the visitors on the break to take the lead, with Targett blasting home Grealish’s layoff from an angle in the 12th minute after sustained Leicester pressure.

Anwar El Ghazi dipped a free kick narrowly over for Villa while the waspish James Maddison was repeatedly denied by the impressive Orjan Nyland at the other end.

Leicester came within inches of an equaliser when Nyland tipped Tielemans’s long-range strike onto the crossbar and fruitlessly appealed for a penalty after a shot struck Marvelous Nakamba’s arm.

Vardy was brought on after 56 minutes but found it hard to get involved and Villa might have doubled their lead but Samatta could not reach Grealish’s inviting cross.

Iheanacho levelled when he tucked home Harvey Barnes’ low cross after 72 minutes, and the game seemed destined for penalties.

Yet in the third minute of four added on Ahmed Elmohamady launched a dangerous ball into the area and Trezeguet coolly finished to send Villa to Wembley.