Tourists' spending, length of stay fall despite growth in arrivals 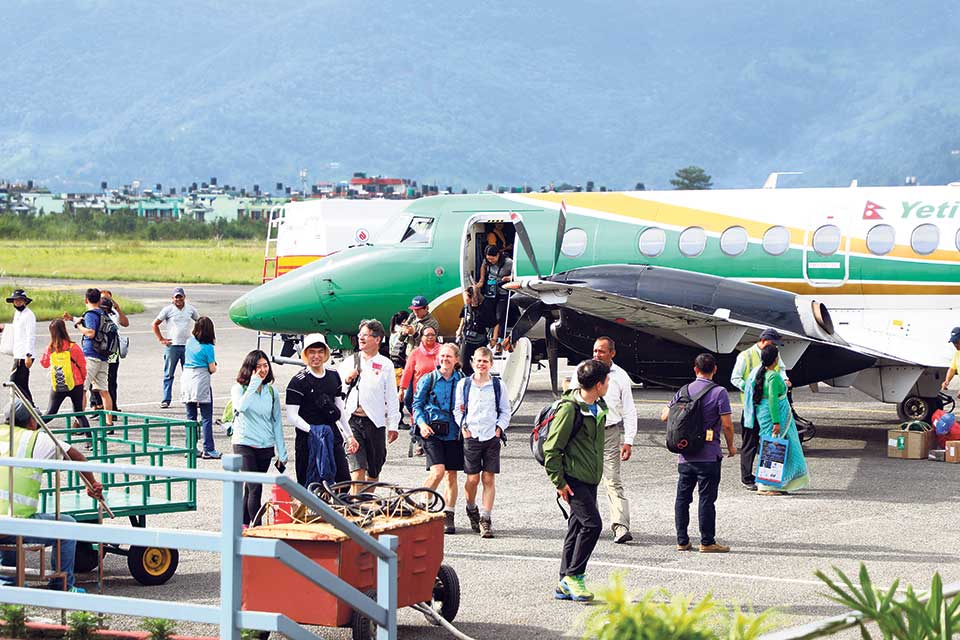 'Leakages' including growing use of Chinese digital wallets blamed

KATHMANDU, June 25: The average length and spending of foreign tourists are on a declining trend even though the government has made commitment to bring high-spending tourists to the country.

Both the average spending and length of stay fell in 2018 despite the country registering a huge growth in the number of tourist arrivals. Nepal welcomed a total of 1.17 million international tourists in 2018, a growth of 24.77 percent compared to arrival figures of 2017.

Tourism experts say that the focus should be on attracting high-spending holidaymakers in Nepal along with increasing tourist footfalls. “While there has been some efforts to diversify tourism markets including in provinces, our major destinations for tourists are still Kathmandu, Chitwan, Pokhara and Lumbini. We have to diversify our markets so that there are more avenues for tourists to spend,” Binayak Shah, the 1st vice president of Hotel Association Nepal, told Republica. “Even Kathmandu stay is not a pleasant experience in recent years due to dust and pollution," he added.

Deepak Joshi, the CEO of the Nepal Tourism Board (NTB), attributes the growing 'leakages' in the tourism market to the decline in the spending and length of stay in figures. One example he cited as the leakage in the market is the growing use of Chinese digital wallets by Chinese tourists.

“China is one of our major source countries. However, Chinese tourists have been paying in hotels and restaurants through digital wallets like Alipay and WeChat Pay. The payments through these digital platforms are not recorded in our system,” Joshi said.

International booking and payments of flight tickets and hotel rooms through online platforms have also been denying Nepal the money that should have entered the country through local travel agencies, according to Joshi. “Many tourists, who stay here for a long time, say two or three months, now live in private residences thanks to the Airbnb. Such spendings are also not recorded in our statistics,” said Joshi.

“Hotel's room prices have gone up, fares have gone up and all costs have increased. How would the tourists spending fall?" It's due to leakage or lack of recording of all transactions, Joshi added.

Govt, ASDP and NACCFL sign deal for capacity buildings of cooperatives in Karnali
12 minutes ago