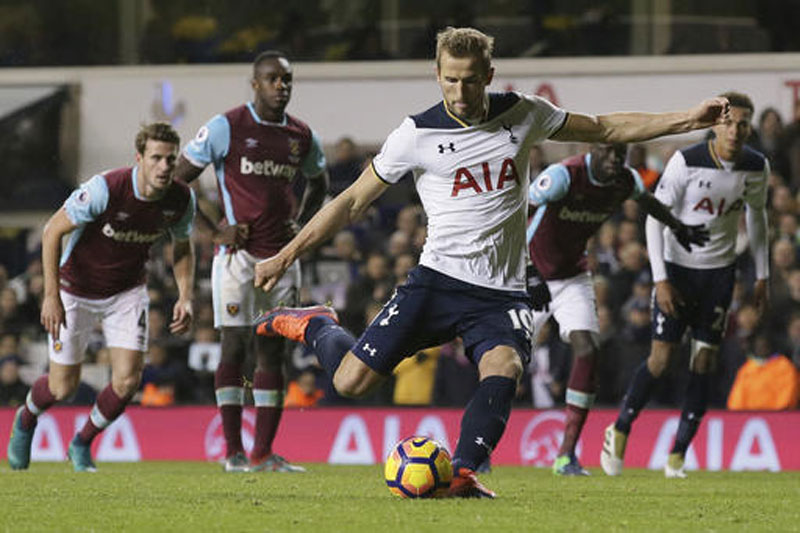 Arsenal striker Olivier Giroud scored only his third Premier League goal of the season to retrieve a 1-1 draw at Manchester United.

Tottenham forward Harry Kane, who missed almost two months through injury across September and October, scored twice in the closing minutes against West Ham to recover a 3-2 victory and end his team's seven-match winless run.

Liverpool remained on top despite being held by Southampton to 0-0, but Manchester City was only behind on goal difference after winning at Crystal Palace 2-1.

Chelsea, which plays Middlesbrough on Sunday, and Arsenal are two points behind the front-runners while Tottenham is a further point back in fifth.

Arsenal manager Arsene Wenger's winless run in competitive meetings with rival coach Jose Mourinho extended to 14 matches, but the Frenchman will probably not be too concerned with that after seeing his side escape with a point.

Giroud scored an 89th-minute equalizer in a disappointing meeting between two English heavyweights. In a rare attack by the visitors, Alex Oxlade-Chamberlain reached the byline and crossed for his fellow substitute to head home at the far post with Arsenal's first effort on target all match.

Juan Mata's 68th-minute goal put United ahead, the playmaker meeting a right-wing cut-back by Ander Herrera with a low, first-time shot into the corner.

Tottenham was the only unbeaten team in all four leagues in England thanks to Kane's late scoring exploits.

Kane, the league's top scorer last season, netted in the 89th minute and again in the first minute of stoppage time from the penalty spot as West Ham unraveled at White Hart Lane. There was still time for Winston Reid to be sent off after collecting his second yellow card for pushing Kane in the final seconds.

Michail Antonio put West Ham ahead with a 24th-minute goal that was canceled out six minutes after halftime by Harry Winks on his first Premier League start. West Ham went back in front thanks to Manuel Lanzini's penalty, after Reid was fouled by Vincent Janssen.

Yaya Toure made an immediate impact on his return from his Manchester City exile.

The Ivorian midfielder was a surprise inclusion in Pep Guardiola's starting XI, making his first league appearance of the season, and justified his selection by scoring goals in the 39th and 83rd minutes to bring City level on points with first-place Liverpool.

Substitute Connor Wickham's 66th-minute goal briefly made it 1-1 but Palace slumped to a fifth successive defeat.

Struggling champion Leicester conceded inside 33 seconds in its latest defeat before a Champions League fixture.

After 12 games of its title defense, Leicester is languishing in 15th place in the 20-team league on 12 points — two above the relegation zone. Claudio Ranieri's side has already lost six times, double the number of defeats it had in the whole of last season.

Leicester's fans started a rendition of "Champions of England, you'll never sing that" at kickoff, only to see their team quickly fall behind when Etienne Capoue scored and then Roberto Pereyra extended Watford's lead in the 12th minute. Riyad Mahrez pulled one back from the penalty spot for Leicester, which plays Club Brugge on Tuesday.

American manager Bob Bradley was denied a first win in charge of Swansea when Seamus Coleman scored an 89th-minute equalizer for Everton.

Bradley became the first Swansea manager in the Premier League to fail to win in his first five games — taking just two points from a possible 15 — and the Welsh club dropped to last place, behind Sunderland. Victor Anichebe's double and Jermain Defoe's 150th Premier League goal gave Sunderland a 3-0 win against Hull.

Bournemouth won away for the first time this season and ended Stoke's recent revival. Nathan Ake's 26th-minute header was enough for Eddie Howe's team to grab all three points and its first league win in four matches.