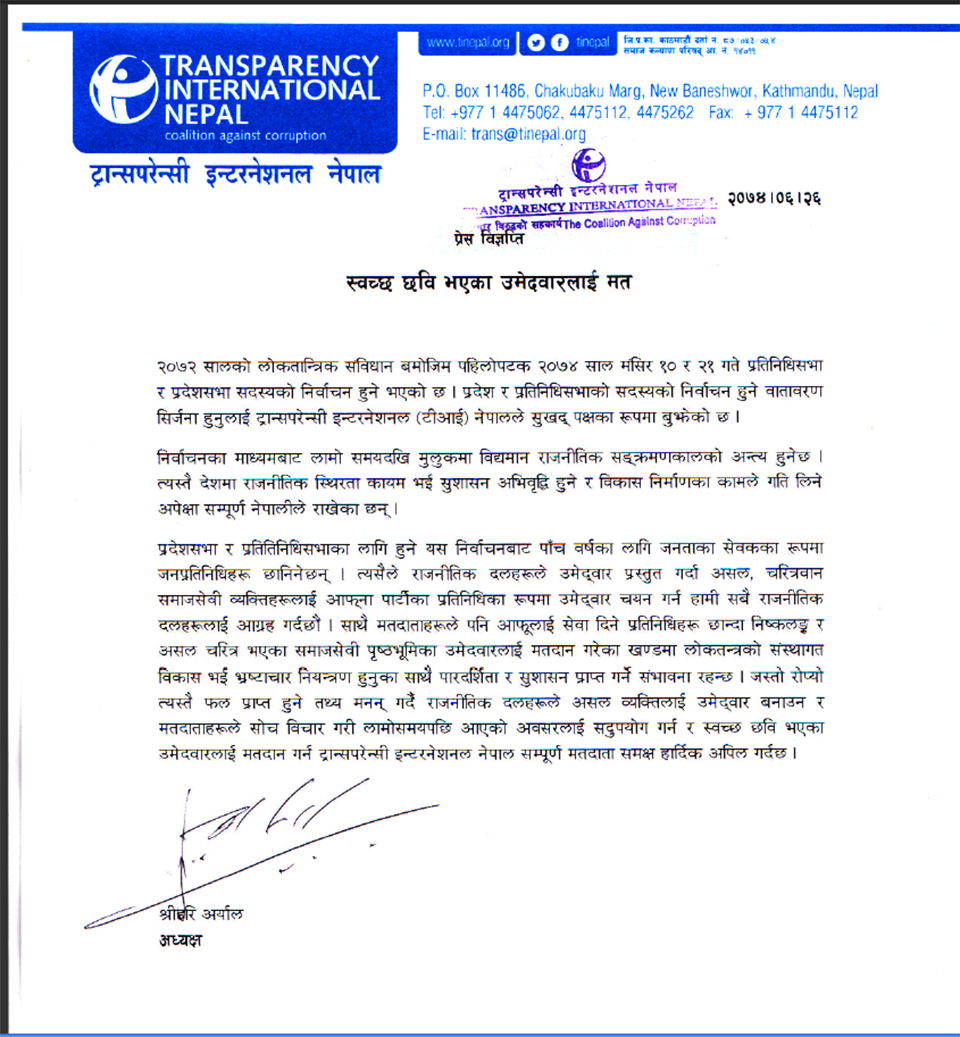 KATHMANDU, Oct 12: Transparency International Nepal has urged all political parties to field the candidates with clean image while contesting in upcoming parliamentary and provincial elections.

It has also urged the voters to vote against the corruption accused politicians. The suggestion from the graft watchdog body comes at a time when the parties have been recommending corruption accused or convicted leaders for the elections.

Ruling Nepali Congress has named corruption convicted Khum Bahadur Khadka as member of the party’s candidate selection board.  Khadka, who had been convicted by Supreme Court in 2012 for misusing nearly Rs 10 million, has also been recommended as a candidate for the parliamentary elections from Dang Constituency 1. Another NC leader Govinda Raj Joshi, whose corruption case is currently under hearing at the apex court, is also strongly lobbying to get the party’s candidacy from Tanahun.

Similarly, NC leaders including Chiranjivi Wagle, who were convicted for graft are also said to be lobbying to make their comeback in politics by contesting the upcoming elections.

The main opposition CPN(UML) has also recommended controversial gangster Dipak Manange as the candidate for provincial assembly elections from Manang. Manange was accused of amassing properties without legal means. But the Special Court gave him a clean chit though his case is yet to be testified at the apex court.

Issuing a press release on Thursday, TIN has urged the voters to select the right candidates to control the corruption and to institutionalize the democracy that will lead the good governance and development in the country.

KATHMANDU, Jan 23: Expressing serious concerns over the discrepancies in the details related to the earthquake victims, the Transparency International-Nepal (TI-N)... Read More...

WHO reviewing report urging new guidance over airborne spread of coronavirus
2 hours ago
Govt hands over leaking houses to the poor, many did not take it
3 hours ago

PHOTOS: Children being administered Vitamin A today and tomorrow
21 hours ago