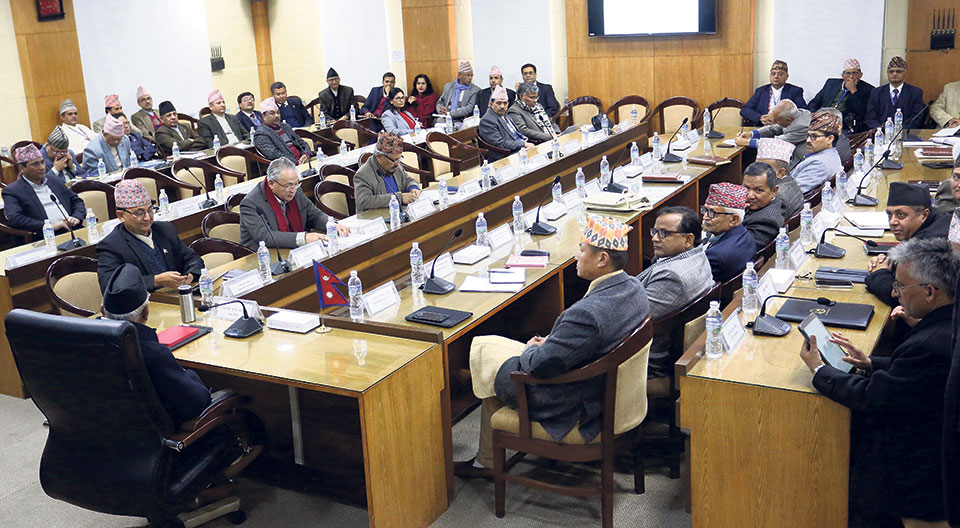 KATHMANDU, Dec 19: The Inter-Province Council (IPC) has endorsed a timeline for the implementation of federalism, including the management of civil servants, giving full shape to the Natural Resources and Fiscal Commission, and readying the necessary laws.

The second meeting of the council, held at the Prime Minister’s Office at Singha Durbar Tuesday, decided to pave the way for the provincial governments to appoint the required technical civil servants on contract if the federal government failed to fulfill the staffing requirements by mid-February.

Endorsing a report submitted by a task-force formed by its first meeting last week, the IPC has decided to settle by mid-April all the problems that have surfaced during the implementation of federalism. The meeting Tuesday was attended by the prime minister, federal ministers and the chief ministers of the seven provinces.

“We have endorsed a timeline for addressing the human resources crunch, the lack of necessary laws and other issues. According to the timeline, a Natural Resources and Fiscal Commission will be given full shape by mid-January while the general laws will be readied by mid-April,” said Mohammad Lalbabu Raut, chief minister of Province 2.

A five-man task-force was formed last Tuesday under the leadership of Finance Minister Yuba Raj Khatiwada and entrusted with recommending solutions to the grievances raised by chief ministers at the first IPC meeting.

Raut, who was also a member of the task-force, said that the report will help implement federalism. “The report has been endorsed by the IPC meeting, which helps address the difficulties in going federal, and we are hopeful the rest of the issues will also be solved gradually,” Raut told journalists while emerging from the meeting.

The report has mentioned a timeline to hand over projects which are under the jurisdiction of provinces but still remain under federal purview. Government bodies that fall under  provinces will he handed over to the provinces by mid-February. “The report has opened the way for provinces to hire temporary staff if the staffing needs are not met even after civil servant adjustments, and a deadline has been fixed for the purpose,” Raut further said.

The chief ministers had complained that they were not able to implement projects for lack of civil servants.

The Prime Minister’s Office is to coordinate with the provinces for sorting out any issues that surface while implementing the timeline.

No going back on republic, federalism: Shekhar Koirala

KATHMANDU, March 23: At a time when a section of Nepali Congress (NC) leaders are voicing in favor of a referendum... Read More...

Assault on civil liberties
18 hours ago