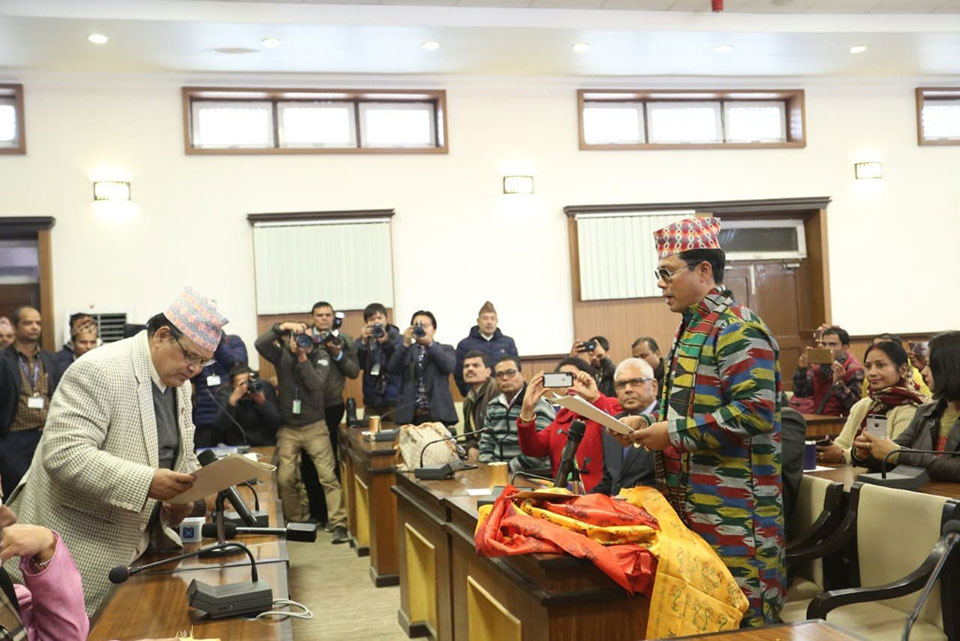 DHANGADHI, Jan 4: Locals of Tikapur have expressed deep dissatisfaction after lawmaker-elect of Kailali constituency-1 Resham Chaudhary, who is also the main accused in the Tikapur carnage, was sworn in as a member of parliament on Thursday.

Madhes-based Rastriya Janata Party Nepal (RJPN) had fielded Chaudhary as a candidate for parliament, and he subsequently won. Eight people including a senior superintendent of police (SSP) and a two-year-old toddler were killed in the Tikapur incident.

Families of the Tikapur victims had high hopes of justice after Chaudhary, who was on the run after being charged for his alleged involvement in the massacre, surrendered to the court. He was then held under custody in connection with ongoing investigations.

The victims were speechless on learning that Chaudhary was brought out of Dillibazar jail, administered the oath of lawmaker, and congratulated amid a ceremony at the parliament secretariat at Singha Durbar. The victims criticized the oath-taking ceremony and the preparations for Chaudhary’s release prior to the court verdict in the case, calling it a serious violation of the law.

“Had Chaudhary been proved innocent and given a clean chit, we would not have any objection,” said Janga Bahadur Saud, 66. He is the grandfather of Tek Bahadur Saud, the infant who was killed in the Tikapur incident. “But the body responsible for formulating laws has itself violated them and spat in our face as they did not wait for the court verdict.”

Saud argued that the government’s action has rendered the country’s laws meaningless. “Why do we need laws if they are not meant to be implemented? In future if someone commits murder, should he too remain untouched by the law?”

Other kin of the victims also said that criminals should not be given immunity from the law. Sharada Bohora, widow of police inspector Keshav Bohora, another victim, condemned the government for politicizing a criminal case by granting protection to a criminal.

“We feel a grave injustice. But we will fight for justice until the end,” said Bohora, adding that she is planning to file a writ petition at the Supreme Court next day.

The Tikapur incident took place on August 24, 2015 after agitating Tharuhat activists clashed with police while attempting to breach a prohibited zone in Tikapur Municipality. Irate protesters brutally lynched police personnel with domestic weapons such as spears, sickles, axes and slingshots.

Forty-two other policemen were injured in the clash which took place within the Shankarpur area of the municipality.

Cases were filed at Kailali District Court against 58 people accused of playing a role in the lynchings. Among them, 32 are still at large.

Tharuhat Unified Struggle Committee, Tharu Kalyankarini Sabha and various other organizations and political parties supporting the Tharuhat cause have been demanding an oath-taking ceremony for Chaudhary and nullification of cases against the accused, stating that the incident was a political one.