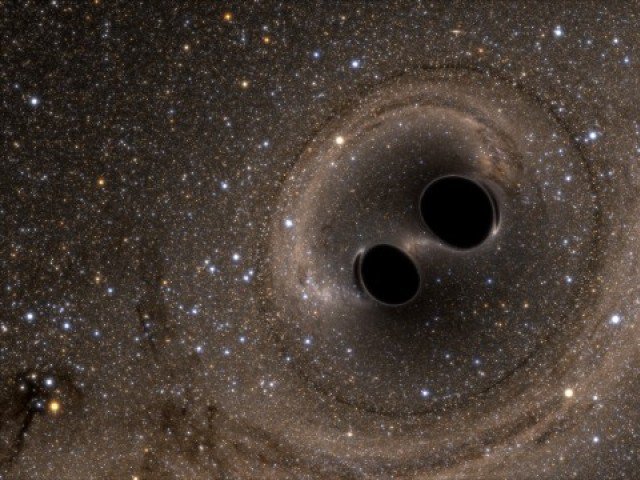 CAMBRIDGE, Oct17: Scientists in the United States and Europe have for the first time paired the detection of gravitational waves, the ripples in space and time predicted by Albert Einstein, with light from the same cosmic event, according to research published on Monday.

The waves, caused by the collision of two extremely dense neutron stars some 130 million years ago, were first detected in August by the Laser Interferometer Gravitational-Wave Observatories, known as LIGO, in Washington state and Louisiana as well as at a third detector, named Virgo, in Italy.

Starting two seconds later, observatories across the earth and in space detected a burst of light in the form of gamma rays from the same part of the southern sky, which analysis showed was likely from the same source.

“Imagine that gravitational waves are like thunder,” astronomer Philip Cowperthwaite, of the Harvard-Smithsonian Center for Astrophysics, said in a statement. “We’ve heard this thunder before, but this is the first time we’ve also been able to see the lightning.”

The observations confirmed that gold, platinum, and other heavy metals were blown into space by the aftermath of the merger of the stars, supporting the theory that such cataclysmic events are likely the source of these metals.

An artist’s illustration of two merging neutron stars. The rippling space-time grid represents gravitational waves that travel out from the collision, while the narrow beams show the bursts of gamma rays that are shot out just seconds after the gravitational waves. NSF/LIGO/Sonoma State University/A. Simonnet

The gravitational waves had been predicted by Einstein in 1916, as an outgrowth of his groundbreaking general theory of relativity, which depicted gravity as a distortion of space and time triggered by the presence of matter.

Three U.S. scientists who made that discovery were awarded the Nobel prize in physics this month.

The new finding confirmed another theory of Einstein’s that gravitational waves and light travel at the same speed, roughly 186,282 miles (299,792 kilometers) per second, scientists said.

The LIGO instruments work in unison and use lasers to detect remarkably small vibrations from gravitational waves as they pass through the earth.

Previously, scientists could only study space by observing electromagnetic waves such as radio waves, visible light, infrared light, X-rays and gamma rays. Those waves encounter interference as they travel across the universe, but gravitational waves do not, offering a wealth of additional information.

The National Science Foundation, an independent U.S. government agency, provided about $1.1 billion in funding for the LIGO research over 40 years.

KATHMANDU, April 16: Cloudy condition will likely prevail across the country, including in the Kathmandu Valley, today due to the influence... Read More...

KATHMANDU, May 16: The weather will remain partly to generally cloudy across the country including in Kathmandu valley with chances... Read More...

JAJARKOT, May 26: A teenage girl died after being struck by lightning at Junichande Rural Municipality-5. ... Read More...