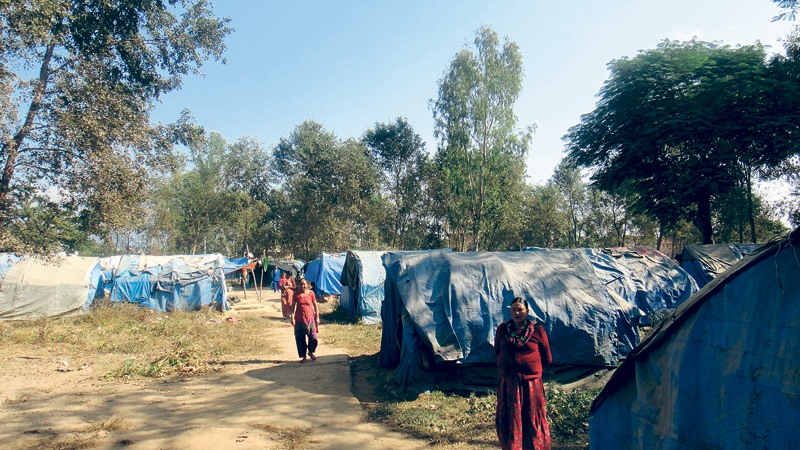 A temporary shelter for flood and landslide victims in Girighat, in Surkhet. Some victim families of the August 2014 flood have been living in this camp since then, waiting for the government to release pledged relief. Photo: Nagendra Upadhyay/Republica

SURKHET, Nov 28: Iman Nepali of Hariharpur Sisneri feels that he is an unlucky person after he lost all of his family members to a massive flood in 2014. His father, mother and younger brother were washed away by the mighty flood. Iman, who survived the devastation, has been living in a temporary shelter in Girighat along the Surkhet - Jumla highway since then, along with other landslides and flood victims.

The 19-year-old, whose life went out of gear after the incident, has not received any substantial support from the government so far. In name of relief, all he received was ‘last rites cost’ for the dead family members, he laments.

“I survived the flood that took away lives of my parents and brother. Then the government gave a little amount to perform their last rites. I have been living in this shelter since then, life is very hard here,” said Nepali.

Nepali crushes stone for survival. Even after hours of hard work, he gets negligible money. Had the government provided him with the promised relief package, Nepali would have left the camp and living in better condition, he says.

“Who’d like to stay here like this? I’d have gone back to my village if I had received the relief package. I do not want to stay here, it’s very difficult to live near a highway.”

Tulbahadur Nepali of Lekhparajul is also living in a hut since after the flood wreaked havoc in his village. Just like Iman, he too is looking forward to receive the relief package. “Right after the flood displaced us, the government had announced relief. It’s been two years since it made the announcement but nothing has been provided to us so far,” said Tulbahadur.

Thousands of people were affected due to floods in Surkhet, Bardiya and Dang in 2014. Hundreds of families were rendered homeless; dozens were washed away by the water. Since then, the country has already received three governments. All the three governments announced special packages for the victims. But none of them delivered. Victims like Tulbahadur feel that the state has not taken necessary steps for resettling them.

“We have been forced to live under huts. It was very hard to struggle against the rain during the monsoon and now we are scared to confront another cold winter. But we don’t have any option other than to live here,” he lamented.

The then Prime Minister Sushil Koirala had pledged a compensation of Rs 50,000 to victims for purchasing land and Rs 75,000 for building house. Stating that the amount was not sufficient, the victims had taken to streets.

Following the protest, Koirala had pledged half million rupees for flood-affected family when he was in Surkhet to inaugurate the Bheri - Babai Diversion Project a few months later.

KP Oli, who became the executive head of the country after Koirala, also took no time in announcing packages for the victims. He promised to provide them relief on par with the earthquake victims. The present Prime Minister, Pushpa Kamal Dahal, who took over the reigns from Oli guaranteed that the flood victims would be resettled without delay.

“Since we turned homeless, we received three prime ministers. Koirala, Oli and now Prachanda. All of them gave us assurances, none ever really cared delivering the promise,” said Narendra Khatri, another displaced spotted in Girighat. “Assurances do not work. We need a solid house to live in. Now it’s already winter, it’s going to get very tough in a few days,” he added.

According to Khatri, the victims not only had challenges for survival post floods, but they also had to deal with psychological problems. After losing family members to the floods, many needed psychological counseling and care. “However, let alone such things, we didn’t even get basic things to survive.”

Most of the flood victims don’t have any piece of land at all. During the flood, their only pieces of land were washed away. Without help from the government in acquiring land, they cannot afford buying land for building house, Khatri said. He stated that the government must chose a safe locality for them and facilitate their resettlement. “Else we don’t hope to ever resettle again?”

Iman feels that he won’t live longer if he has to continue like that. He said he’s finding it too hard to continue with the present life. “The piece of land that I owned has been claimed by the river. I cannot erect house there. I would not live here for a second if I was given a small plot of land by government,” he said, sounding very disappointed.

One hundred and nineteen families live in the Girighat camp. So far, only 24 of them have received first installment for house grant. The government data shows that 2329 families had been displaced by the floods which had killed 24 and later 91 people who went missing in the floods were also declared dead. As of now, over 500 families in several camps have been living in temporary huts with tattered roofs.

KOHALPUR, Dec 27: Even five months after hitting hard by the devastating floods in the Rapti River and Daduwa stream, the... Read More...

SAPTARI, July 4: Floods which hit over a dozen villages in Saptari on Saturday have rendered thousands of people in the... Read More...