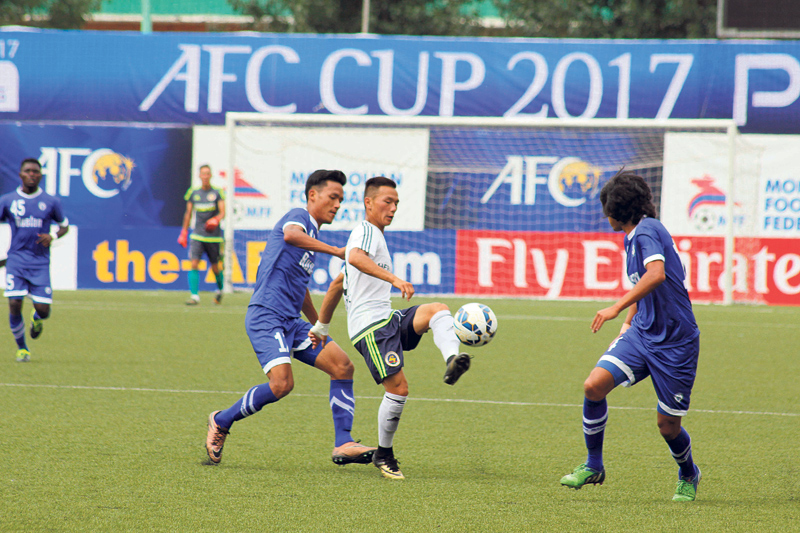 Bikram Lama (blue) of Three Star Club vies for the ball with a player of Erchim FC during an AFC Cup playoff qualifiers match in Ulaanbaatar, Mongolia on Sunday. ( Photo Courtesy: Nsjf )

With the victory, Three Star has strong chances of making it to the next round.

Erchim, which had started the game brightly in front of its home supporters, lost the tempo after the first 10 minutes.  Three Star took the lead in the 14th minute as striker Martins scored the opener capitalizing in an error made by Erchim goalkeeper. Similarly, captain Bikram Lama doubled the lead in the 74th minute scoring off a header from Sunil Bal's cross.

"I am feeling quite happy for scoring in the first game of my captainship," said Bikram, adding, "I want to dedicate this win to the club management, my team-mates and all the supporters. We can win the next game if we play with the same spirit."

"With this win, our chances of progressing to the next round have become stronger," he added.
Three Star created many goal-scoring chances but failed to add goals.

Erchim also missed many chances to score in the first half including a powerful shot from Nikola Duraki in the 9th minute as Three Star goalkeeper Alan Neupane saved it.

Three Star head coach Megh Raj KC expressed his happiness over the result. "We worked hard and delivered positive result. We had very little idea about Erchim's team, but we found them weaker than us," said KC.

"We spent the first ten minutes to understand their playing style and tactics. After that, we played the game as per our plans and registered victory. My players were impressive. We scored the first goal utilizing opponent goalkeeper's mistake and the second one was a world class goal," added KC.

Erchim head coach Battulga Zorigtyn said that the match against Three Star was very competitive. "Three Star is a very tough team. We couldn't capitalize on the scoring chances we had. Luck did not favor us," Zorigtyn said. He also claimed that his team will register victory against Nagaworld in the next match.

Three Star will face Cambodian opponent Nagaworld FC on August 23 in the last match of the group. Victory will take Three Star to the next round and if the result is otherwise, the national champion of Nepal will have to wait for the result of Nagaworld and Erchim FC.

Three Star off to Mongolia for AFC playoff