Three Star off to Mongolia for AFC playoff 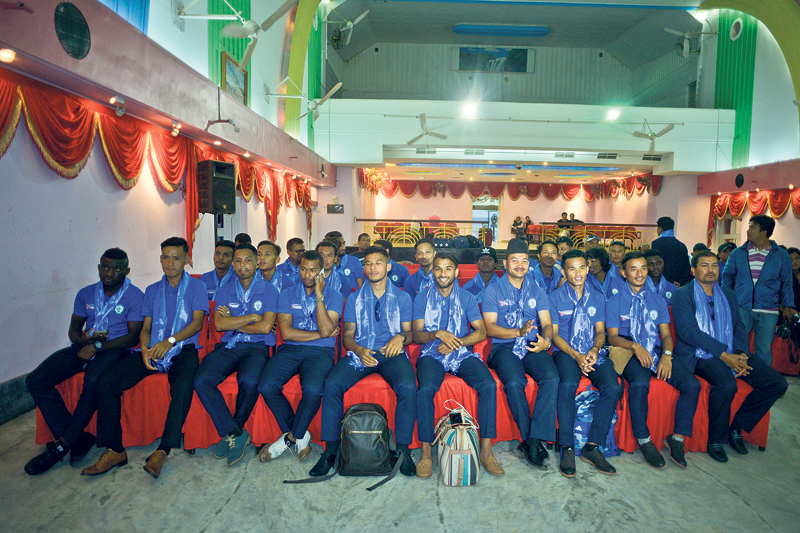 Members of Three Star Club during a farewell function in Patan on Tuesday before leaving for Mongolia to participate in AFC playoff qualifier. ( Bijay Gajmer/Republica )

KATHMANDU, Aug 17: Ruslan Three Star club has left for Mongolia on Tuesday to take part in the AFC Cup play-off qualifiers. The national champion will take on Erchim FC and Nagaworld FC in the Group B qualifying matches.

Three Star head coach Megh Raj KC has decided to hand the captain's armband to midfielder Bikram Lama. However, Nirajan Khadka was given the captain's role in the warm-up matches against departmental teams APF and Tribhuvan Army Club.

“Though Nirajan led the team in the warm-up matches, we were undecided about the captainship for the AFC Cup qualifiers. Last night, we made the decision to hand the captain armband to Bikram as he is now back from injury,” said KC, when asked about the change in captain's role. Nirajan is given vice-captain's role.

Talking to reporters in the farewell program organized in Patan on Tuesday, head coach Megh Raj KC said that Three Star's primary target is to top its group in the play-off. “The club is sending us to Mongolia with full trust. We won't let them down. We will give our best to make the club and whole nation proud,” added KC.

Captain Bikram Lama expressed his optimism of doing well in Mongolia. “The team has improved technically and tactically under coach Megh Raj KC. Understanding among the players is also very good. We are moreover an organized team rather than a star-studded team,” Bikram said, adding,  “We have played against Erchim in the past. Our opponents aren't stronger than us.”

Education should be employment generating, Pokharel reiterates
7 hours ago

Kobe Bryant: A global sports Icon and his 'Legacy'
2 hours ago
MCC should be approved soon, says NC Prez Deuba (with video)
3 hours ago