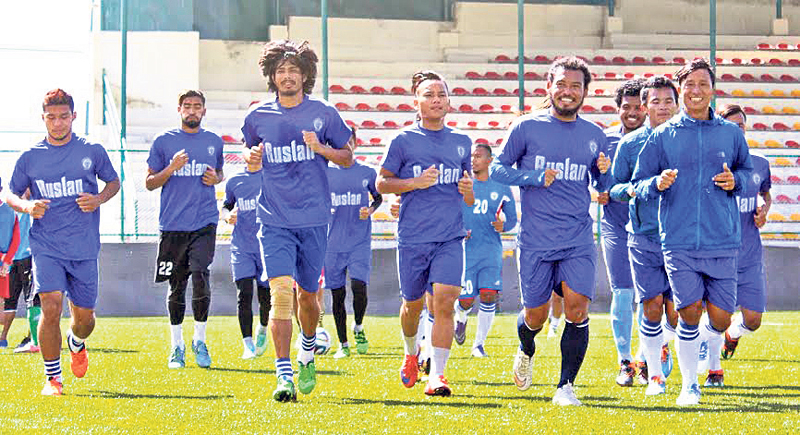 Three Star announces squad for AFC cup play-off
KATHMANDU, Aug 4: Three Star Club has announced a 20-member squad for the upcoming AFC Cup play-off to be held in the third week of August.. The National League champion is flying to Mongolia on August 16.

Nepali league champion is playing the play-off of AFC Cup, a second-tier Asian club football championship, for the first time after the AFC scrapped the third-tier Presidents Cup.

Head coach Megh Raj KC has expressed his satisfaction over the preparation of Three Star. “We have been training since the last three weeks, so the preparation has gone well,” said KC.

Coach KC also said that their two opponents play 'power game' so they are training accordingly. “Both Mongolian and Cambodian clubs play power game so we have formed our team and trained accordingly,” added the coach.

Three Star's target is to top the group and qualify for the next round, according to KC. “Cambodia and Mongolia both are similar to our level. So we expect to make it to the next round by topping the group,” said KC with confidence.

Three Star has a mix of young and senior players. Alan Nepane has replaced goalkeeper Kiran Chemjong, who has joined Manang Marsyangdi Club (MMC), as the first-choice goalkeeper. Similarly, Roshan Mal, who has been playing his trade in England, is also travelling with Three Star for the AFC Cup play off.

Coach KC also said that he has formed the team by selecting the best players available.

Before leaving for Mongolia, Three Star is playing a preparation match against departmental club APF on August 5 at the ANFA Complex, Satdobato.