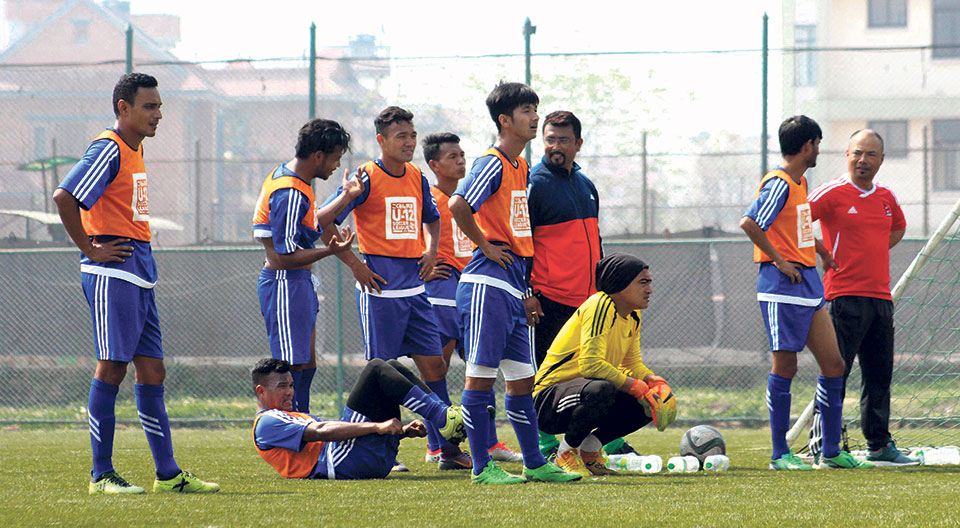 Players of Nepal attend a football training session at the ANFA Complex in Satdobato, Lalitpur on Tuesday. Photo Courtesy: ANFA

KATHMANDU, March 21: A 20-man national football squad has been announced for the final Asian Football Confederations (AFC) Asian Qualifiers match against Yemen in Doha, Qatar on March 27. Nepal’s qualifications chances are over reeling at the bottom of the table with two points whereas Yemen, on seven points, is vying for top spot finish in the Group F.

The regular members of the squad Bharat Khawas and Bikram Lama will miss the last match of the qualifiers for various reasons. Lama is undergoing treatment for an injury that he sustained while playing for Three Star Club in Budha Subba Gold Cup. Khawas has been suspended after collecting two yellow cards earlier in the marquee Asian competition.

The selection panel was led by Nepal Coach Gyotoku Koju along with Coach Raju Kaji Shrestha and goal-keeping coach Ujjawal Manandhar. The last match between the two teams ended in 0-0 draw held at ANFA Complex, Satdobato.

Nepal was pitted in Group F of the qualifiers along with Yemen, Philippines and Tajikistan. Nepal has already played five matches in group stage. Nepal however is yet to register a victory. Nepal lost to Tajikistan in a home-leg match back in October which officially ended Nepal’s chances to move ahead in the competition. Nepal had also lost a match against Philippines, and managed a draw with Yemen during home-leg encounter.

Nepal has two points in the tournament after five games. The Philippines leads the table with nine points followed by Yemen and Tajikistan vying for the top spot with seven points each to their names.

Nepal was invited to participate in the tournament by AFC after Guam withdrew from the qualifier. Nepal had won the AFC Solidarity Cup to earn a place in the group stage.

KATHMANDU, Oct 31: Nepal U-19 has started their Group A match against host nation Kyrgyzstan AFC U-19 qualifiers at Bishkek. ... Read More...