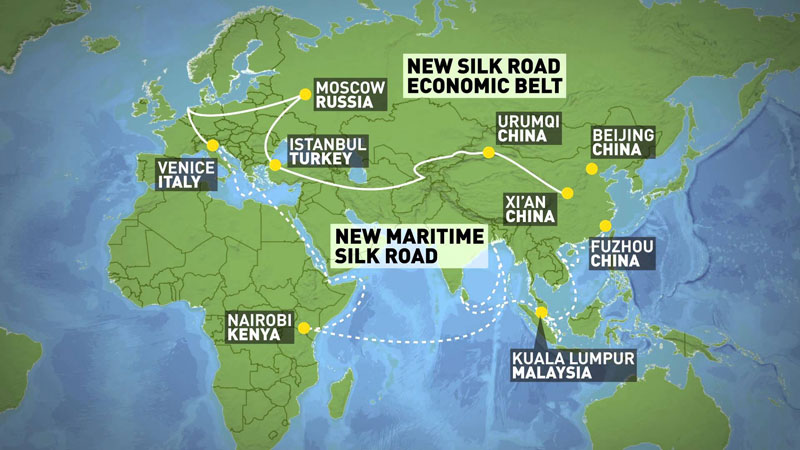 From New Delhi’s perspective, the OBOR is Beijing’s strategic muscle-flexing in Asia aimed at strengthening ‘string of pearls’ to encircle India
Prime Minister Puspa Kamal Dahal or Prachanda has once again broached the old idea of Nepal-China-India trilateral partnership. Ever since he first mooted the idea way back in 2009, during his visit to Beijing as an opposition leader, Prachanda has been talking about it on various occasions and forums. The idea in itself is not bad, as it seeks to bring China and India closer in Nepal’s development, thereby, turning Nepal into a hub of economic activity between Asia’s two giant economic powers. However, things may be easier said than done. Given the state of strategic rivalry and security susceptibility between New Delhi and Beijing, the proposition still appears far-fetched, at least in the immediate future.

China seems to be positive on this, but India is hesitant. China views the trilateral partnership from economic perspective, trying to fit it into its signature ‘One Belt One Road’ (OBOR) project. The OBOR in itself is a grand project focusing on connectivity and economic integration of countries, regions and continents with the Chinese economy, which Beijing calls a ‘win-win opportunity for all’. However, from New Delhi’s point of view, the OBOR is Beijing’s strategic muscle-flexing in Asia, aimed at further strengthening the ‘string of pearls’ to encircle India. Obsessed, perhaps, with this notion, India has expressed its reservation on OBOR and particularly on OBOR’s South Asia projects—’China-Pakistan Economic Corridor’ (CPEC) and ‘Bangladesh-China-India-Myanmar’ (BCIM) corridor—forget participating in them.

This is what has brought New Delhi and Washington into strategic partnership, purportedly to contain China. The OBOR may be China’s strategic project, but it, if realized in a way China wants, brings benefits to neighbors like Nepal, India, Pakistan, Bhutan, Afghanistan, and Myanmar alike. Connectivity creates economic opportunities and boosts inter-country trade. The OBOR, as it appears, seeks to achieve this and ensure connectivity among countries, regions and continents.

The CPEC connects China’s Kashgar with Pakistan’s state-of-art Gwadar port—being constructed in the Arabian Sea with Chinese assistance—through a road that passes through some contested areas in Pakistan’s side of Kashmir. India contests that the CPEC will bring more terrorist threat than economic benefits. In India’s view, the CPEC will give more strategic leverage to both China and Pakistan, as it provides China with shortest surface passage to the warm water Arabian Sea while it helps Pakistan reach out to energy-rich and Muslim-dominated Central Asian countries.

India fears that the CPEC success will disturb power equilibrium in South Asia as it will further strengthen strategic and security alliance and cooperation between China and Pakistan. India, therefore, does not want the CPEC to come about. But China and Pakistan are determined to construct this corridor for which China has already allocated budget and Pakistan made security arrangements so that the CPEC will be completed within the target timeframe.

Similar is the case with the BCIM. It is an international highway that begins from Kunming of China’s Yunnan province and goes through Myanmar, Bangladesh and finally reaches Kolkata of India. This, if realized, will give China direct access to huge Indian markets whereas India, Bangladesh and Myanmar can trade not only with China but also with South East Asian countries like Vietnam, Laos and Cambodia through this same route.

China, Myanmar and Bangladesh are willing whereas India is reluctant as New Delhi again raises security concerns, saying that this road corridor, after it crosses India-Bangladesh border, will pass through areas close to the ‘Chicken’s Neck’. This is a narrow strip of land connecting India’s mainland with its north eastern provinces—of Sikkim, Assam, Meghalaya, Manipur, Nagaland, Tripura, Mizoram and Arunachal areas where China and India fought a border war in 1962—before it reaches Kolkata.

In Arunachal China and India still have border disputes and the border is thus heavily guarded. India’s other fear is that if the CPEC and the BCIM come into operation India may lose its monopoly in the Indian Ocean. Some Indian analysts believe that the BCIM is China’s strategic card, which will pose a big security threat to India. New Delhi thus cannot compromise its security in the name of economic benefits. This implies that India is not at all interested in joining the China’s OBOR project and may even be willing to obstruct it.

Soon after China announced the OBOR and unveiled its different components, India was quick to announce its own ‘Look East’ policy—later rephrased as ‘Act East’ policy.

Critics see this as India’s counter-strategy to contain the OBOR and reach out to East Asian countries, mainly China’s eastern and south-eastern neighbors, with which Beijing has territorial and maritime disputes. The BBIN (Bangladesh-Bhutan-India-Nepal grouping) initiative and connectivity scheme within BBIN countries is India’s yet another strategic move vis-à-vis the OBOR. Although the BCIM is a component of Chinese President Xi Jinping’s brainchild OBOR, the Chinese project may be a boon for India’s Act East policy as well, but only if China and India are willing to cooperate. But it is unlikely given the rivalry and susceptibility between the two countries.

Coming back to the trilateral partnership concept, India, while dealing with China, is least interested in any scheme that involves a third country. India seeks to deal with China bilaterally while China has kept all options open—bilateral, tri-lateral, regional and multi-lateral. When Prachanda mooted the idea of trilateral cooperation in 2009, Beijing responded quickly and positively while India expressed its reservation. India’s then foreign minister Salman Khursid dismissed it as an immature idea. Thus trilateral cooperation, despite Nepal’s push and China’s willingness, is not likely to come into fruition. India may be keen to engage and expand areas of cooperation with China bilaterally. New Delhi, however, does not want Nepal to come in between, while China’s approach is different as it is prepared to deal with its neighbors in whatever way it is convenient to do so.

The problem is also with the perception and big power psychology. First, the trilateral idea was raised by Nepal, this too by someone who was not in power and someone not considered ‘India’s friend’. Second, New Delhi’s establishment tends to look at Nepal and Bhutan as its backyard and as under its traditional sphere of influence. India is always susceptible to any kind third country involvement in Nepal. More specifically, India is obsessed with the fear that China’s growing presence in Nepal will ultimately threaten India’s traditional influence. If India thinks Nepal is its backyard, China may consider Nepal as its front-yard and gateway to South Asia.

This perceptual difference may hit the trilateral concept. Prachanda raised this concept as a purely developmental construct with investment and participation of all three countries, particularly on Nepal’s hydro and infrastructural sectors. Nepal has huge hydro potential but not the required funds. India has a huge market for energy but limited sources to tap whereas China has money and expertise.

Trilateral understanding, cooperation and partnership will not only expedite infrastructure-development in the region but also boost trade and give the region collective bargaining power in the international arena. After all, strategic and security concerns that do not let these countries work together for mutual benefit and common prosperity is just stupid politics.

The author was Editor-in-Chief of The Rising Nepal

People planning to go abroad for work and further study are seeking the document after various countries made the vaccination... Read More...

KATHMANDU, Sept 25: Streets and marketplaces in the Kathmandu Valley look crowded after the government decided to ease the prohibitory... Read More...