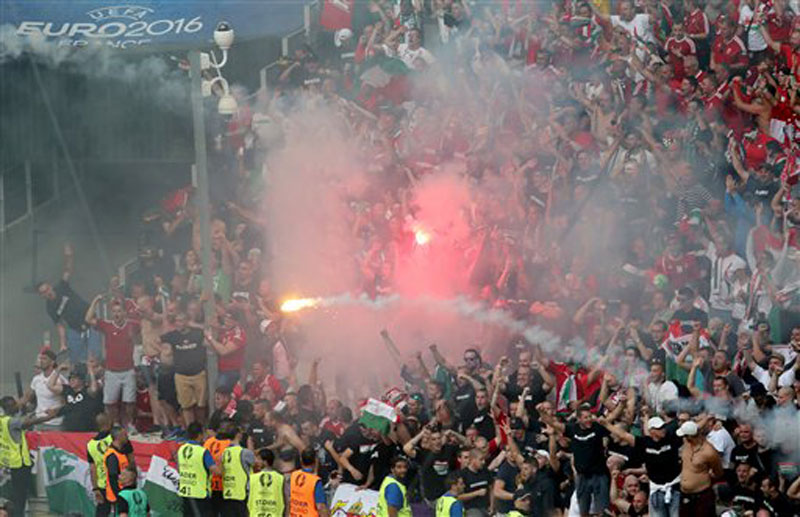 Supporters of Hungary light fireworks during the Euro 2016 Group F soccer match between Iceland and Hungary at the Velodrome stadium in Marseille, France on Saturday. (AP Photo/Claude Paris)

MARSEILLE, France, June 18: There are good draws and there are bad draws. Iceland has had one of each.

Iceland's opening Group F match which ended 1-1 against a Portugal team led by was met with jubilation, a far cry from the despair that followed Saturday's ending.

The tiny island nation, making its debut at the European Championship, came close to winning its first match at a major tournament on Saturday, but a late own-goal gave Hungary a 1-1 draw.

"We were so close," said Iceland forward Kolbeinn Sigthorsson, who was named man of the match. "It's quite a big loss for us, this draw."

Iceland was leading at Stade Velodrome after Gylfi Sigurdsson converted from the penalty spot in the 40th minute, but teammate Birkir Saevarsson then scored an own-goal in the 88th.

Sigurdsson gave Iceland the lead from the spot when he hit the ball low and hard to veteran goalkeeper Gabor Kiraly's right.

The penalty followed a chaotic scramble in the area after Kiraly caught, then dropped, a cross from Johann Gudmundsson. In the ensuing melee, Russian referee Sergei Karasev ruled that defender Tamas Kadar had fouled Aron Gunnarsson.

"There was definitely a touch," Iceland co-coach Heimir Hallgrimsson said. "Some would say it was a soft penalty."

Hungary now has four points in Group F and looks set to qualify for the round of 16. Iceland has two points and next plays Austria.

"I think we've invested everything to deserve to win this game. We have forced this goal and I think we deserved it," Hungary coach Bernd Storck said. "They never gave up. We deserved this point."

Four third-place teams in the six groups will advance to the round of 16, so Iceland will know what it needs to do against Austria because it will be among the final teams to play.

PALERMO,  March 25: Italy survived some first-half scares on the way to a 2-0 win over Albania in a World Cup... Read More...