Those breaching army code of conduct will be booked: Army chief Thapa 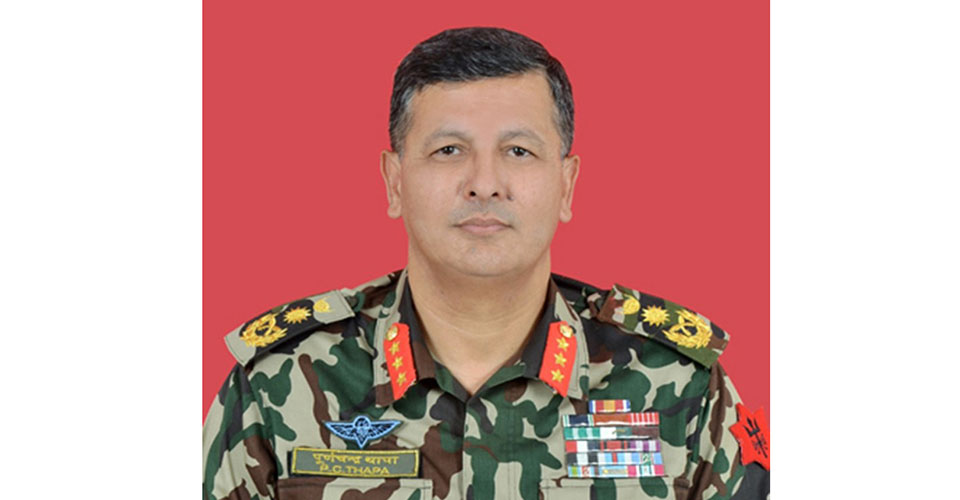 KATHMANDU, April 19: Chief of Army Staff Purna Chandra Thapa today said those within the institution defying the Army's code of conduct and chain of command would be booked.

"It is unfortunate that the Army is forced to celebrate the 'Army Code of Conduct Week'. Corruption and other ill practices that cannot be controlled now will never be checked," he said while inaugurating the Army's code of conduct week. Recalling contribution of ancestors to this institution, he said some forces were still working to tarnish its image. The slogan for the campaign is 'Inspiration of Army Integrity'.

Saying the Army's policy of zero tolerance against financial irregularity within the institution would start from the headquarters, he urged the rank and file to remain aware of such trend and make the institution transparent.

"No one committing financial irregularities is spared. Efforts to influence those in power for promotion and participation in the peacekeeping mission would be recorded, which may affect career development of any official," he said.

The Army has announced to observe the first week of every Nepali New Year as the Army's code of conduct week. On the occasion, the rank and file is trained on their duties, responsibilities, financial transparency, appointments and things to be taken into account while holding political meetings.

Also on the occasion, Army chief Thapa launched a book related to Army's code of conduct.

KATHMANDU, Sept 10: The official website of Nepal Army has unveiled the property details of Chief of the Army Staff... Read More...

16 houses swept away by flood in Sindhupalchowk; two die, 23 missing
21 hours ago
Govt decides to operate short-distance public transportation within the district
14 hours ago

Public transportation fare to go up by 50%
14 hours ago

Six die in landslides in Kaski and Lamjung
48 minutes ago

Indian media under fire in Nepal for running baseless reports on PM Oli, Chinese ambassador
3 hours ago
Govt decides to operate short-distance public transportation within the district
14 hours ago